Happy Mothers Day to all the moms out there!

Blue Rodeo are not a “Greatest Hits” band. Indeed, before this album came out, Jim and Greg routinely used to say, “We’ll only do a greatest hits when we’re finished.” Well, record company pressure must have gotten to them (or they may have just outlasted their own expectations), and they released this typical hits compilation: 12 hits and 2 new songs, just like every other band’s hits compilation.

The problem with Blue Rodeo is that they are so much more than the sum of their hits. Sure, “Rose-Coloured Glasses” (track 2) is a hit single, but what about “Rebel” or “Heart Like Mine”? (This is the album version of “Rose-Coloured Glasses”, not the very rare single remix, only available on 7″ single back in 1986). There’s simply no room on a single disc hits album for the songs that define the Blue Rodeo sound. Blue Rodeo were and still are more about albums, the bigger picture.  Especially in the early days, each album was a different direction from the last.  Each of the first five (and arguably six) first Blue Rodeo studio albums stand as critically important pieces of work.

Having said that, you do get a generous slice of hits here. Fans know these songs already, so I won’t spend too much time talking about them. “Lost Together”, the full length version of “Diamond Mine”, “Bad Timing”, “Try”…these are all songs that saturated the radio in the late 80’s and early 90’s. Peppered along with them are tunes like “Trust Yourself” from Casino, a minor single that some might have forgotten. I was pleased that “Side of the Road” and “Dark Angel” were here, which represent Blue Rodeo’s less commercial side.

For those who love Jim’s ballads, some of his most notable are here.  For those who prefer Blue Rodeo’s radio country-rocking side, there is “Til I Am Myself Again”, “It Could Happen to You” and the classic “Hasn’t Hit Me Yet”.  Greatest Hits vol. 1 is a fair slice of great tunes.  Certainly there are none to skip…just that there are plenty more where these came from.

Missing in action: any songs from The Days In Between, Blue Rodeo’s most recent album at the time. I guess that’s because The Days In Between just was the first underwhelming Blue Rodeo album. The US version of Greatest Hits subbed in Jim’s hit ballad “Bulletproof” from the later Palace Of Gold, instead of “It Could Happen To You” from Tremelo. (Palace Of Gold followed Greatest Hits, but not in the US where this was released afterwards.)

The two new tracks were a revelation. Blue Rodeo had started experimenting with a horn section, and the Greatest Hits tour featured these additional musicians on their back catalogue. The two new songs also feature the horns and strings.  This led into their next album, the aforementioned Palace of Gold, which utilized these instruments throughout.  A re-recording of “After The Rain” benefits greatly from their soulful sounds (not to mention extended solos and jamming). The Bee Gees cover “To Love Somebody” (lead vocal by Greg) has ended up being one of the best covers Blue Rodeo has done to date, live or otherwise. The new sound with horns would be fully realized on Palace Of Gold, but fear not if you don’t like this sound: they soon reverted to the classic configuration of the band.

My best advice is, if you want to really check out some Blue Rodeo, pick up those early albums one by one when you find them cheap (it’s not hard to do). If “Try” is your favourite song, pick up Outskirts, and then explore the rest of the gems on that classic record. Likewise if “Lost Together” is the only song you know, pick up that album and be surprised by the deep album cuts that you would have missed otherwise. And most of all, see the band live. 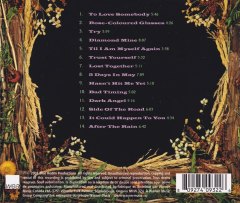