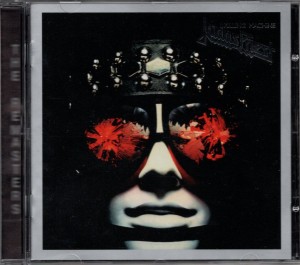 After producing “Better By You, Better Than Me” on Judas Priest’s Stained Class LP, James Guthrie was hired to do their next album.  This coincided with another step in Judas Priest’s evolution.  In the 1980s they would streamline and simplify their sound, but their earlier albums were darker and more complex.  1978’s Hell Bent for Leather (called Killing Machine in the UK) is the dividing line between the two sides of Priest.

A stuttering riffs opens “Delivering the Goods”, one of the best known tracks from this excellent LP.  A newly upbeat Priest does indeed deliver the goods on this bright rocker.  “Feeling like we’re ready to kick tonight, no hesitating, my bodies aching, looking for some action, satisfaction all right.”*  This is a far cry from “Saints in Hell” and “Dissident Aggressor”.  Now Priest are uplifting your rock and roll souls.  It’s a heavy, headbanging party track with solid gold riffage.  The outro is a showcase for drummer Les Binks, unfortunately on his final Priest studio album.  His loss would be felt through the entire 1980s.

Another simple hard rock classic, “Rock Forever”, is second in line.  Binks’ double bass work is like an impatient kid anxious to quit school for the day.  Part way through, a multi-tracked Halford turns into a cool choir of Robs.  Further in, “Evening Star” is a bit of a surprise.  Starting as a ballad, it quickly turns into a…rock and roll singalong?  As one of Priest’s most melodic songs, it could have easily swayed new fans onto this band.  It also could have turned off fans who liked their metal heavy.

Two tracks from this album have consistently been in the Priest setlists.  One is “Hell Bent for Leather”.  It has a delightfully dry sound, with guitars cranked and Binks on overdrive.  It was obviously good enough to close Priest’s shows going forward (mostly), with Rob riding out on his Harley.  It’s not Priest’s greatest song, but it is one of their most legendary.

Closing side one is “Take On the World”, sort of a prequel to “United” from British Steel.  With double tracked drums, it has a “We Will Rock You” quality, but done Priest style.  It’s clearly meant to be sung from the stage, to a screaming audience.  “Put yourself in our hands so our voices can be heard, and together we will take on all the world!”  Repeat, rinse, dry.

Side two’s opener is one of Rob’s naughty numbers:  “Burnin’ Up”.  The sexy groove on this one will nail you to your seat.  It’s an album highlight though it might leave you feeling funny, like that time you climbed the rope in gym class.  “You dish the hot stuff up but you keep me waiting, so I’ll play it dirty until your body is breaking.”

At this point, the US version of the album breaks into what I will call the greatest song Judas Priest have ever done.  It’s the second one that has remained in setlists.  And it’s not even one of theirs.  It’s Fleetwood Mac’s “The Green Manalishi (With the Two-Pronged Crown)”.  Rarely does a band make a cover song their own like Priest did with “Green Manalishi”.  Everything on this is perfect, from the impeccable tempo, to the immaculately composed solos, to the flawless riff.  Les Binks is right in the pocket, and it’s very telling that live versions with Dave Holland on drums were stiffer.  If you only ever get to hear one Judas Priest song in your whole life, make sure that it’s “The Green Manalishi (With the Two-Pronged Crown)”.

You could put a fork in the album at this point and call it “done”, but there’s still plenty of awesome to go.

A funky Priest groove goes down on “Killing Machine”.  A menacing Halford warns, “I got a contract on you,”  backed by trademark Priest riff.  The middle section with the solo is a whole different beast.  A faster song,  “Running Wild”, pumps the adrenaline with chugging guitars.  “I take on all comers, they back up or they fall,” sings Rob with a challenge in his voice.  At this point I’m convinced that this guy could take on the world for real.  “I rebel but I worked hard, and I demand respect,” he sings with earnest.

There’s a respite here before the end, with a ballad:  “Before the Dawn”, which reminds of softer moments from Sad Wings of Destiny.  The guitar solo is legendary, but Rob Halford is the star on this melancholy masterpiece.  Finally, Priest go dirty again with “Evil Fantasies”.  Lock up your kinks, or just go with it!  It’s another sexy groove.  Rob knew how to write lyrics appropriate to the music.  “You pout, I snarl, you whimper.”  It’s like a Romulan having sex with a Klingon.  It shouldn’t be, but it is, and it’s cool! 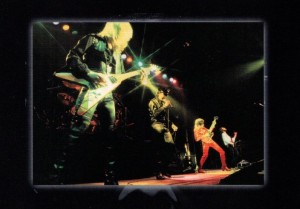 Sony tacked on two completely unrelated bonus tracks, but review them we must.

“Fight For Your Life” is a demo of “Rock Hard, Ride Free” from Defenders of the Faith, almost identical except for some of the lyrics, and solo section.  Great bonus material for that album, but not this one.  Also unrelated is a live version of “Riding on the Wind” originally from Screaming for Vengeance.  This blitzkrieg is from the legendary US festival.

* The lyrics on the Japanese version were poorly translated:  “Feeling rock queers, ready to kick tonight.” 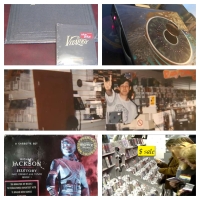