Any time we talk with Andy Curran, we can count on two things:

This time out, we got some exclusive information about some new forthcoming Coney Hatch releases.  Andy told us about one of the new songs to be included as a bonus on the new Coney live album, including the title and subject.  He also dropped some details about a new band he’s working with, and involving a certain guitar player from a certain Canadian trio.  Sounds interesting.

We also discussed some other releases Andy has been involved with:  the Triumph Allied Forces box set, Kim Mitchell’s The Big Fantasize, and the Rush box set featuring next week’s guest Jacob Moon.  Best of all, Andy showed us his El Mocambo bass up close and personal, with a detailed story behind it.  He also told us about a charity idea that he has, and he wants your feedback.  If you want a chance to own some Coney Hatch history, this will be of interest.

Thank you Deke and Andy for an awesome Saturday.  Happy Record Store Day!

It’s another two-show weekend!  Get ready to rock this Friday and Saturday.

What is the best album that you bought “on spec” — without knowing much of anything about it?  This is a great question for fun discussions.  The subject was suggested by Kevin aka BuriedOnMars, who is one of our favourite guests here on the show.  With him will be Sarca Sim and her own killer list.  Aaron from the KMA will be on board with his best discoveries.

And…for the first time ever…all the way from Scotland…

…Joining this LeBrain Train in his debut appearance is J, the Vinyl Daft Dad, aka Jim Dead.  This talented singer/guitar player/songwriter has been wanting to hang out for over a year, and now we finally get to do it.  Well overdue!  Not only is he a truly great musician, but also a wonderful human.  This show, and these lists, are going to be prodigous!

I’m sitting here in awe that Andy Curran is coming back to talk to us for a third time.  The Earl of the Eighth Note, the masterful bassist and vocalist from Coney Hatch, is back to take care of some loose ends!  I can’t think of a better way for you to spend a Saturday afternoon than checking out the rock and roll tales of Andy Curran.  Now that we have the Coney Hatch Live at the El Mocambo album in hand, we have so much more to ask.  We also have some special guest questions locked and loaded.  Make no mistake — this will not be a repeat of the first two Curran shows!

I’d like to thank Deke, Andy and Chip for making this possible.  As Deke says, we’re just fans.  But we eat, breath and sleep this stuff.  Andy has some of the best stories.  I can’t wait to hear some more.

As usual, this is a show that you want to make sure that you catch live.  We try to ask as many viewer questions as we can so don’t miss it!

No preamble needed here! Just sit back, grab a drink and enjoy the entire 1:45 chat with Sean Kelly below. We tackled just about every project he’s ever been in, from Lee Aaron to Helix to Trapper to Coney to Crash Kelly, 69 Duster, Nelly Furtado, and more.  What’s this about Motley Crue figures?  And hear about the new upcoming Coney Hatch Live in Germany LP, Lee Aaron’s new tunes, and a hell of a lot more.

Sean’s enthusiasm for music and especially rock and roll is contagious.

A big thanks to Sean for taking his time to talk to us, and also to Deke for hooking this one up.  You guys rock.

Sean Kelly is a busy guy!  He was in fact one of the very first guests to agree to come on the show, back before we had even done anything notable.  We finally got him on the schedule just in time to celebrate two new albums.  One is Lee Aaron’s upcoming Radio On, with its insanely catchy debut single “Cmon”!   The other is Coney Hatch’s brand new Live at the El Mocambo.  As if that wasn’t enough, he recently worked on a new Helix song called “Not My Clowns, Not My Circus”.  Did I mention he’s a busy guy?

Additionally, Kelly is known for his work with Crash Kelly, Trapper, and 69 Duster  You might also be familiar with his collaborations with Gilby Clarke, Nelly Furtado, Emm Gryner, and Carole Pope.  As if that wasn’t enough to do, he also plays classical.  On the side, he put together an EP to go with a book he wrote called Metal On Ice!  Will we have time to ask him about all this activity?  We’ll try!

Superdekes is the guy who asked Sean to come aboard, so let’s give him a round of applause while we’re at it! This is another show you’ll want to make sure you catch live.

Great show tonight with your co-hosts  Harrison the Mad Metal Man, Aaron from KeepsMeAlive, and Superdekes!  We talked the Nigel Tufnel Top Ten Iron Maiden Covers/Artwork (that’s a mouthful) and it was awesome.  We took a close look at:  albums, singles, T-shirts, Reaction figures, MacFarlane figures, and the Neca Powerslave Eddie.  If you like Iron Maiden, you automatically love their artwork.  Ergo, you need to watch this show!

First we unboxed some brand new Reaction Eddie figures.  Go to 0:16:50 of the stream.

Then we wished Steve Harris a Happy Birthday, and commenced with the lists!  Go to 0:24:00 of the stream.

After the conclusion of the Maiden lists, we had a freeform chat covering Queensryche’s Operation: Mindcrime, and a newly unearthed Black Sabbath track called “Slapback”.  Go to 2:22:45 of the stream to check that out.

Thanks for watching, and if you just want to know what Maiden art we picked, check out Aaron’s hand-written list below!  See ya next week! 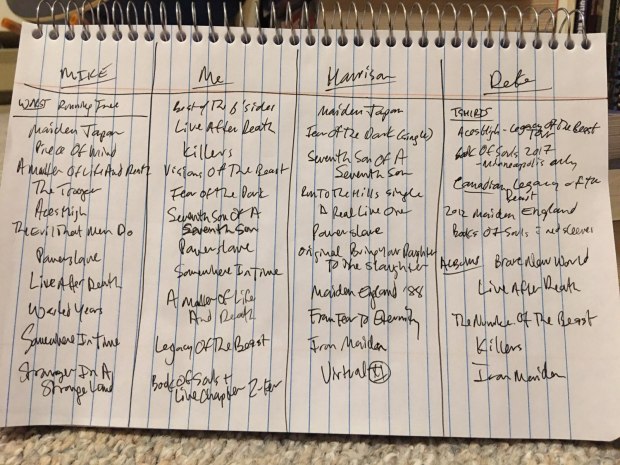 Time to chill out with a more laid-back show this Friday!  We’ve had some serious lists, and serious guests in recent weeks.  This week is almost like a vacation.  Join Harrison the Mad Metal Man, Aaron from KeepsMeAlive, and Superdekes with myself here tonight as we share our favourite Iron Maiden artwork.

The art of Derek Riggs, Melvyn Grant, and many talented coversmiths including Hugh Syme will be up for examination tonight.  No disqualifications:  albums, singles, whatever!  As long as one of us likes it, we can list it.  Each of us will have our own rules and criteria.

BONUS:  Iron Maiden ReAction figure unboxing!   While it would be nice to have a complete set, I could only order four.  These Eddies, based on Iron Maiden cover art, will definitely be on topic for this show!

Next week:  The 1 Year Anniversary Show with giveaways and special guest Brent Jensen! 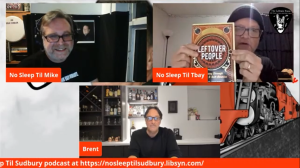 A huge thank-you once more to Martin Popoff for joining us on the show to talk King’s X!  We have been immersing ourselves in the magic trio from Texas:  Dug, Ty and Jerry.  And it has been brilliant.  And these were some brilliant lists.  Martin’s insight on these crucial records will be of interest to diehards and new fans alike.

Martin hung out and chatted King’s X (and a little Rush) for an hour.  Afterwards, we were joined by Kevin from Buried On Mars to continue the musical discussions.  Jacob Moon, Marillion, Def Leppard, Black Sabbath…it was a fun freeform chat that I hope you will stick around and enjoy for the balance of the show.

A huge thanks to Mr. T-Bone Erickson for the new Martin Popoff intro.

Your panel tonight was:

Thanks for Dr. Dave Haslam and KK for your bonus lists!

Please give this one a “like” and a “share” — and give Martin your warmest welcome on tonight’s show!

For this very special 50th episode of the LeBrain Train, we welcome back Martin Popoff to talk King’s X!  It is such an honour and a pleasure to have Martin on a second time.  The subject matter:  King’s X’s Top Five albums.  Actually a monumental task.  And you can’t read my reviews and guess how I will rank them.  I will be coming at this with fresh ears and no holds barred.

These are some serious lists, and we’re sitting down with a serious King’s X fan!

Tonight, “We Will Find Who We Are”.  Is this one “Over My Head”?  Let the “Skeptical Winds” blow.  I don’t want to “Pretend”, because “I’ll Never Get Tired” of King’s X.  Please give Martin your biggest welcome, and give it a share, won’t you?

For this very special 50th episode of the LeBrain Train, we welcome back Martin Popoff to talk King’s X!  It is such an honour and a pleasure to have Martin on a second time.  King’s X was the subject broached (by Uncle Meat, thank you) and Martin challenged us to hone down our usual Nigel Tufnel Top Ten lists to a tight Top Five.

Topic decided, it was only after the fact I realized how difficult this was going to be!  But I think I have my top five ready.  These are some serious lists, and we’re sitting down with a serious King’s X fan.

Friday night, “We Will Find Who We Are”.  Is this one “Over My Head”?  Let the “Skeptical Winds” blow.  I don’t want to “Pretend”, because “I’ll Never Get Tired” of King’s X.  Please give Martin your biggest welcome, and give it a share, won’t you?

Just a reminder that Mike Fraser, who has either engineered or mixed just about every album you love, will be on the show tonight!

In preparation for tonight, Deke and I have been doing our research, listening to records, and listening to other podcasts that Mike has been on.  While you can count on some AC/DC questions (and other major bands that Mike has worked with) Deke and I have some queries about some other albums off the beaten track.  You can check out some of Mike’s credits at his website.

Please give this a share to your rock buddies, and show Mike a warm welcome on tonight’s LeBrain Train!

Note:  Thank you T-Bone for your understanding.  We original had T-Bone Erickson on the schedule for tonight to debut the latest Current River music video.  That show will now be pushed back to February 5.  T-Bone has graciously agreed to be bumped so we could talk to Mike Fraser.  Mighty fine dude!