Welcome to the end of Week of EPs! We checked out some famed and obscure EPs all week: 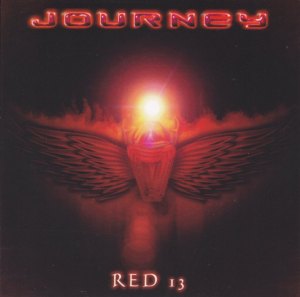 I chose an obscure, semi-forgotten release to end the Week of EPs.  Time seems to move slowly in Journey-land.  Their first track released with “new” singer Steve Augeri was in 1998, and the album Arrival was released in 2000. (2001 in America.)  Generations wouldn’t come out until mid-2005.  There was a lot of upheaval at the time for classic rock bands like Journey who were lacking key original members.  No longer on a major label, Journey tried releasing a self-produced EP on their website in 2002.  It came and went without a lot of people even noticing.  Fans who knew what was going on were interested in what Journey might sound like now, free of the constrictions of a record company.

I don’t know where the title Red 13 comes from, but if you add up studio albums including the soundtrack Dream After Dream, Red 13 would be the band’s 13th studio release.

The fact that there’s an intro (simply called “Red 13”) tells you that Journey are at least stretching their wings a bit.  It’s an interesting intro, with programmed techno beats, new-agey prog keyboards, and noisy, exotic Schon licks.  Even though I loathe these kinds of beats, I am at least excited by the sound of Journey experimenting with their sound again.  This intro takes us directly into a song called “State of Grace” which expands on the exotic vibe.  It’s one of the heaviest things recorded by Journey to date.  Augeri lacks the vocal superpowers of Steve Perry, but he fills the role acceptably well.  “State of Grace” combines anthemic Journey with experimental, guitar-dominated hard rock.  It is a successful mix.  Red 13 is off to a promising start.

The track simply titled “The Time” is a Zeppelin-esque slow groove, with nary a keyboard to be found.  Instead, Schon and Jonathan Cain lay on the rhythm guitars, complimenting what the other player is doing.  While something like “The Time” is an admirable achievement to a listener such as myself, I don’t think average Joe Six-pack Journey Fan will appreciate what the band are doing here.  They might consider it a “piss break” song.  Meanwhile I’m hanging on waiting to see what Schon’s going to do for a solo.    (Answer: he does what Schon does!)  I’ll also single out drummer Deen Castronovo as an MVP on this song.  I’ve always been candid about my preference for Steve Smith in Journey, but this song is a different kind of Journey and Deen’s frenetic fills are more than ample.

The third song “Walking Away from the Edge” was co-written by, of all people, Geoff Tate.  This is a solemn piano-based ballad.  It resembles some of the things the band did in the past with Steve Perry.  Unfortunately it’s not as memorable as, say, “Send Her My Love”.  It does boast a powerful chorus but at 6:17, the song is a little too long.  It fades abruptly, and then the final song is “I Can Breathe”.  This one is little more than a standard sounding Journey rocker.  It is not particular special unfortunately, until close to a 3-minute mark when a horn section kicks in.  They should have had the horns there from the start!

Red 13 is not a bad EP, but the production is sub-par, as can happen when bands self-produce.  However, had a producer been there in the studio the songs would undoubtedly turned out differently so that’s the trade off.  The worst thing about it is the band photo, which just looks cheap and bad.  What is that on your face, Neal?  Dirt? 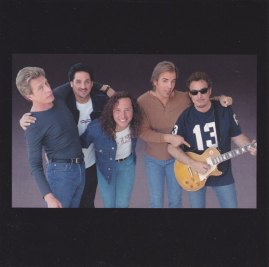 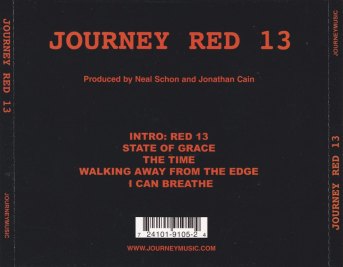