Welcome back to the Week of EPs! Each day this week, I’ll be checking out a variety of EP releases, both famed and obscure. 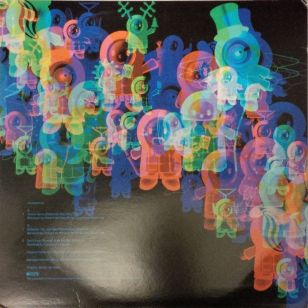 Eager to cross over to new fans, in 2004 Marillion released an album called Remixomatosis.  It was a 2 CD set of fan remixes of tracks from 2001’s Anoraknophobia.  Hogarth-era Marillion have not been remix-shy, having done something like this on 1998’s Tales From the Engine Room EP.  Aware that chances of being played in the clubs were slim, the following year Marillion released a promo EP of three more remixes under the band name Remixomatosis.  The name Marillion appears nowhere on the sleeve.

99% of the time, I really dislike remixes, especially when songs are danced up.  I bought this for the collection, but let’s give it a spin.  “You’re Gone”, originally from Marbles, sounded very little like the “Debonair Dub Mix” on this EP.  All I can hear from the original track is Hogarth’s vocals.  Maybe some keyboards, but who knows because the dominant part of the song is an annoyingly repetitive synth & beat.  This goes on for an agonizing 7:55.  This is not a song I would listen to for enjoyment.

The “Plasma Dub Mix” of “Between You and Me” is almost twice as long as the “Marillion Vs. Plasma” version on the Remixomastosis CD.  This track adds a new bass line consisting of four notes that repeat over and over and over and over and over.  Then a little bit of Hogarth’s vocal is dubbed over synthesizer lines.  There have been better remixes of this song, notably the Mark Kelly remix from the “Between You and Me” CD single.  After a couple minutes, the remixer Robert de Fresnes throws in some acoustic guitar from the original song, which really only makes me want to hear the original song.  If you like repetitive music made by computers, go for it.

The closing track is the best (and shortest) one, the “Into the Fire Mix” of the superb “Don’t Hurt Yourself” from Marbles.  As arguably the best song on Marbles, it is a difficult track to ruin.  The remixer Cameron Lasswell wisely leaves Steve Hogarth’s vocal intact.  The vocal hooks on this song have always been fetching.  They are now cloaked in spacey synths, which I prefer to dumb repetitive synths.  It sounds like a song by Lights, perhaps, or one of her soundalikes.

I can’t rate this EP very high.  This is a collectible, pure and simple.