They probably thought I was going to hell the day I showed up on the first day of school in that Judas Priest T-shirt.  Mrs. Powers was a devout Catholic, with a judgey side to go with it.  She enjoyed publicly humiliating her “misbehaved” students.  I can only imagine what she really thought.  Here was her “A” student, and over summer holidays, he’s got himself a T-shirt that says “Judas Priest” on it.  He’s drawing pictures of guitars in art and doing his class speech on a band called Kiss.  What the devil is with that Ladano kid?

If Catholic school was ever too sedate or solemn, this was magnified 100-fold in the lenses of the 8th grade.

It was the year you made the choice of which highschool to go to.  You’d undergo the Sacrament of Confirmation.  It was their last chance to make sure you didn’t go off the rails and do something stupid, like do drugs or leave the church!

There was a weeklong Catholic retreat to an old convent in Ancaster called Mount Mary.  “Every student I ever had who did not go to Mount Mary grew up to do drugs, or killed themselves,” said Mrs. Powers.  Holy shit!  I didn’t want to be there and it was obvious.  It was the middle of winter and every day had extensive outdoor activities, but worse, you were not allowed to bring any of your music.  No Walkmans, no tapes.  There was a radio tuned to an approved radio station in one of the activity rooms.  I didn’t know what to do, so before we left, I listened to and memorised as many Kiss songs as I could.  Double Platinum worked for my last minute Kiss cramming session.  The song I was most successful with was “Love Gun”.  I had just received a taped copy of The Elder but did not have time to investigate it much.  I had to go to Mount Mary instead.  This intrusion into the wants and desires of my musical passions kind of pissed me off.  I had to wait a week to get into The Elder.  Stupid retreat.  I was so scared of being caught with any contraband that I flushed my candy before getting on the bus.  Humming “Love Gun” in my head, we were off.

Mount Mary conjures up some real discomfort.  They were trying to teach you to be open minded about it but all I can really recall are negative feelings, and some disgusting hot chocolate.  I was isolated from everything I loved and stuck with a bunch of people who I didn’t particularly like, and felt the same towards me.  I knew this because we had to form circles and tell everybody something we liked about them.  Nobody seemed to know much about me at all.  “You like Star Wars, uhhh…and I don’t, but that’s cool.” was the most memorable.

There was a day spent outside in the snow as “hunters” and “hunted”.  I don’t remember the moral of this activity.  The hunters had wooden sticks as rifles, and my bully Steve Hartman was one of them.  The role playing had a bizarre shade of reality.  There were no explanations to us as to why people were selected for their roles.  The hunted were supposed to find some specially marked trees, but I spent most of the time just hiding in the woods from hunters and teachers alike.  There was another day including a long hike up something called “Agony Hill”. 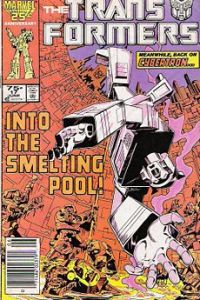 The day we were released from Mount Mary and sent home was cold and wet.  The snow was melting, but it was just dirty slush.  My parents were supposed to pick me up when the busses arrived at the school, but I didn’t see them and vice versa, so lugged a giant heavy suitcase home through the snow.  At least when I got there, a brand new Marvel Transformers comic was waiting for me with my mail in the kitchen.  #17, “The Smelting Pool”, considered one of the best of the series.

“Well that’s over,” I said to myself.  “Now I just have to get through the rest of this school year and it’s freedom.”

That teacher just had a bad impression of me.  There was the rock and roll devilry which seemed to bring humiliating public interrogation.

“How many of you went to church this past Sunday?” she questioned the class.  “Put up your hands.”  She was determined to find out just how devout our behaviour was.  No excuses.

About half the class raised their hands.

“How many of you were there last week?”  A few more hands went up.

“And the week before?”  A couple more.  “How many have been to church in the last month?”  She noticed me, and I noticed her.  My hands were in my laps.

“WHEN WAS THE LAST TIME YOU WENT TO CHURCH?” she boomed. 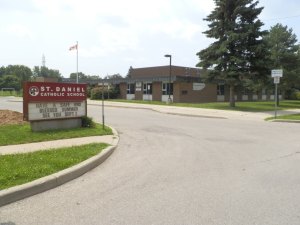 My sister dubbed it “The Hell Hole”.  The school and church are right across from each other

It had been a couple years.  Powers had her “no excuses permitted” policy regarding going to church, so I didn’t even try to explain.  (Essentially her policy was:  You are old enough to go to church on your own now, so don’t tell me your mom was sick.)  I just endured the firepower of Mrs. Powers.  What else could she do; send a note home to my parents?  If I wasn’t going to church, chances are they weren’t either.  And there was a reason for that.

It was an Easter service a couple years prior.  Good Friday mass, very busy, and the church was packed.  My dad always liked to get an aisle seat so that’s what he did on Good Friday.  That was his mistake.

My sister and I had better instincts.  We preferred to hide somewhere in the middle of the pews.  Do you know what our least favourite part of service was?  The part where you have to shake hands and greet your neighbours.  We were shy and would rather not, so we just turned to face each other.  We’d shake hands and say, “Hello sir how are you today?”  “Oh, I’m good sir and how are you?”  We’d do this for as long as we could credibly ignore the adults around us trying to shake our child hands.

On Good Friday we tucked in down the pew while dad sat on the aisle, when the Priest announced that for this special service, volunteers would come and wash your feet if you were sitting on the aisle.  John 13:34:  “If I then, your Lord and Teacher, have washed your feet, you also ought to wash one another’s feet. For I have given you an example, that you should do as I have done to you.”  My dad has a hard time saying no.  He kicked off his shoes and socks and politely pretended not to be hating every second.  And the family simply stopped going to church after this.  Coincidence?

Mrs. Powers, you can judge all you like.  Maybe my dad was sick of church and I was sick of your shitty school. 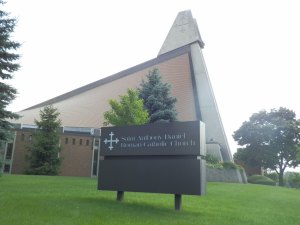 One of the heavy metal albums from my childhood that reminds me most of that period is Born Again, by Black Sabbath.  Boy, Powers sure would have hated those lyrics. “Good life is contradiction, because of crucifixion.” You can only imagine, if she knew what was I was hearing!

The devil and the priest can’t exist if one goes away,
It’s just like the battle of the sun and the moon and the night and day,
Force of the devil, that’s what we’re all told to fear,
Watch out for religion when he gets too near, too near….

Of course Ian Gillan isn’t a satanist; he’s just a singer!  But those lyrics would have set her head on fire, if the album cover didn’t do that first.  Do we mind “Disturbing the Priest”?  The truth is, the words were inspired by the rehearsal sessions for the album.  They were receiving noise complaints from the local church.  Do we mind “Distrurbing the Priest”?  “Not at all, not at all, not in the least.”  Once you know the genesis of the song, the lyrics fall into place.  Not exactly Catholic-friendly, but certainly not evil.

Evil-sounding though?  Absolutely.  Born Again might be the most traditionally evil sounding metal album in the history of the genre.  That’s why the original mix is so important even though it sounds like the refuse of the Golgothan excremental demon.  The lack of clarity, the muddy haze, and the echoing bottomlessness of it just add to the mystique.  You should not be able to clearly hear what the singer is saying.  It should remind of you a bad hazy dream.  Hell, it’s not the lyrics that make it evil; it’s Geezer’s fuzzy bass!

This article was produced after discussions with friends and acquaintances from different faiths and backgrounds.  Some had similar experiences.  Some are still dealing with residual Catholic guilt.  We were talking old church stories, and all this stuff came flooding back.  The sitting, the kneeling, the hand-shaking…my sister and I singing “Stars” by Hear N’ Aid instead of the hymns…the good and the bad.

One of the school bully kids was killed four years after Mount Mary, riding his motorcycle to work.  I morbidly wondered what Powers thought of that; he went to Mount Mary yet he was on her dead roster.  Would she add that detail for next year’s class?

It’s obvious I still hold a lot of resentment to those school years.  I wonder if that’s why I have such a strong attachment to the heavy metal music of the era.  Let the psychoanalysis begin! 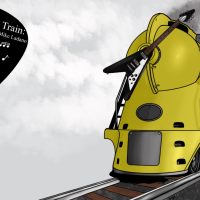 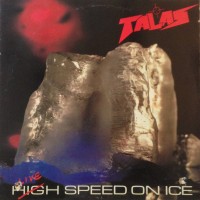 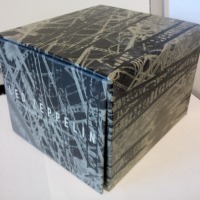 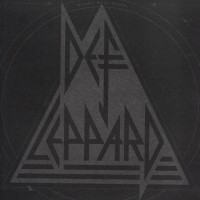 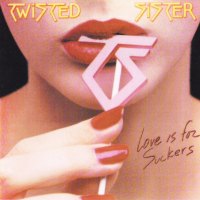 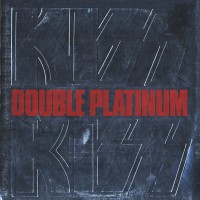 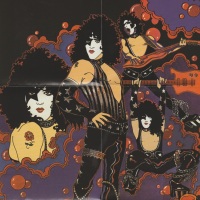