Preamble:  The Year in Review (and Reviewing)

2019 was the seventh year of life for this site, and we do thank you for that!  Getting tired with the same old way of doing things, I became bored.   The solution was throwing some new content into the mix and seeing what happened!

The first thing I planned was an informal new series called Just Listening.  Though people confused these writings with reviews, it’s essentially just my thoughts as I listened to an album.  Sometimes I would revisit an old record I already reviewed and see if I felt any different.  There were 10 instalments of Just Listening in 2019.  I intend to continue doing this, as sometimes I just have a few ideas to jot down after playing an album.  Reviews will remain as in-depth and intense as you’ve come to expect.  I love writing reviews, and there are a few lined up for early January that I hope you’ll enjoy too.  At the same time, it’s increasingly important for me to just listen to music.  My collection has dusty corners that miss my attention.

Second, in 2019 I bought a bunch of new tech.  Why not, right?  It’s kind of funny.  I grew up in the 70s and 80s; back when you debated for months or years over in which home video system to invest .  Tech is far more disposable today.  The worst thing that can happen is a relatively painless, postage-paid Amazon return.

So a waterproof camera was added to my arsenal.  This enabled me to make a bunch of cool videos this past summer, including what I think is the best Sausagefest video yet.  One of the immense joys of that summer gathering is the fresh, cool water of the Beaver river.  For the first time this was captured for you up close and personal.

It’s easy to sit here tootin’ my own horn but I feel the 2019 video gets you closer to the feeling of actually attending a Sausagefest yourself.  You can imagine sitting in the river with us, drinking or smoking whatever you fancy.

A new dashcam enabled me to start another video “series” called Dashcam Idiots.  I honestly thought, living in Kitchener Ontario, that I’d have a lot more content to post by now.  (I did get a cool late-night video of a deer on a country road that I thankfully didn’t hit.)  I suppose it’s a good thing that I don’t have a multitude of dashcam videos to upload.

The biggest and most important new series was a long time wish of mine:  my VHS Archives.

The new tech this time was a cheap USB video capture device.  This enabled me, after many years of promises, to share my personal Pepsi Power Hour videos with you from the late 80s and early 90s.  It has been a culmination of a decades-long dream:  taking this rather large VHS library and getting the rarest and most valuable content online.  As of writing this, I’m 82 instalments deep.

And because this is supposed to be a list of lists, here are what I consider to be the Top Five Best/Most Significant of the 2019 VHS Archives.  You’d be remiss not to play these.

1. Blackie Lawless (W.A.S.P.) interviewed by Erica Ehm – 1989
The best interview with Blackie that I’ve ever seen.

And of course the VHS Archives allowed me to finally present my own music video for Poison’s “Nothing But A Good Time” that we made in highschool in 1989!  A long time I have waited and in 2019 I scratched it off the list.

There’s lots left on these tapes so the VHS Archives will continue into 2020!  I’ve left some “big guns” in reserve for future posts.  As long as none of these tapes break!  One or two of them are in very, very rough shape now.  Others are still pristine.

Want a taste of what’s still to come?  Here’s a preview. 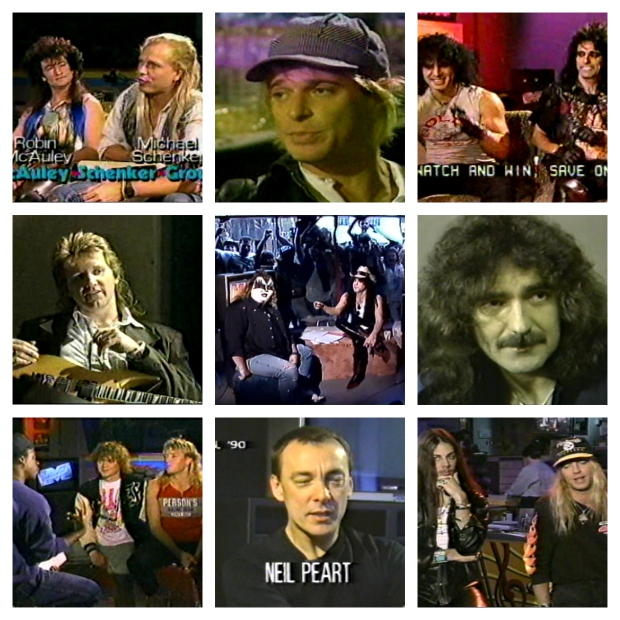 Which of these interviews would you like to see first?  Vote below!

The Movies I Saw:  Don’t expect a comprehensive list!

Nothing but sequels and spinoffs!

I’ve been talking The Mandalorian on social media quite a bit, and I’ve been quite critical of the show.  It’s #5 by default.

3. Marillion – With Friends From the Orchestra

The new Tom Keifer Band is really remarkable.  With soul, roots n’ blues yet also a foot in classic Cinderella rock.  The heart of the Keifer Band made it an easy #1.  Whitesnake put out a strong effort; probably their best since Slip of the Tongue or even 1987.  Marillion may have re-recorded old songs with an orchestra, but in doing so it’s possible that they have recorded the definitive versions.  Tool is Tool is Tool is Tool.  And Jim Crean deserves a shout-out for his guest-laden original album The London Fog, better than a lot of well known releases in 2019.

Kathryn Ladano – Masked
Don’t just take it from me.

The Darkness – Easter is Cancelled
I have not been able to wrap my head around this album. I’ve steadfastly stood by this band through five albums, often in quick succession, but this time they’ve thrown a curve. Perhaps it’ll grow on me in 2020.

…And I haven’t even seen The Dirt.  I just feel that strongly about it.

I hate the look of the guys playing The Crue, I hate the idea of a biopic, and I hope to make it through another year without seeing it.  I’m happy with my copy of the book — the only Dirt you really need.

Motley Crue will be a towering part of the 2020 tour scene, as they look ahead to their big “Stadium Tour” with Def Leppard, Poison, and Joan Jett.  Meanwhile the Robinson brothers Chris and Rich have formed a new version of The Black Crowes, who will be playing all of Shake Your Money Maker live.  Far more interestingly, Mr. Bungle (now featuring Scott Ian and Dave Lombardo) will be reuniting and playing only three shows, featuring their cassette demo The Raging Wrath of the Easter Bunny played in full for the first time.  Even the original BulletBoys have reunited.

The big news, so they say, is still to be announcd.  Keep your ears to the ground for a full-on 2020 AC/DC tour with Brian Johnson, Cliff Williams and Phil Rudd back in the fold.  Reliable sources have stated that the band are finishing up old Malcolm Young song ideas for album release.