Part 2 of a 4-part series on early Def Leppard singles!

I’ve been slowly, slowly working towards a complete Def Leppard collection.  This is one of the last items from the early years that I still needed — The Def Leppard E.P.  This is a 7″ single,  33 1/3 RPM however, and never have these recordings been released on a Def Leppard CD.  This first EP had Frank Noon on drums.  He was just a fill-in, and a month later Def Lep replaced him with a 15 year old Rick Allen.

I have been wanting this one since I was a young fella.  Def Leppard was a band I was obsessed with back in highschool.  They are in fact the band that really kicked off my collecting, as I described in one of the first Record Store Tales.  “Ride Into the Sun” was the B-side to the “Hysteria” single, and it has long been a personal favourite of mine.  What I found out later was that this B-side was actually a re-recording of one of the very earliest Def Leppard songs, pre-On Through the Night!

The self-produced 1979 version of “Ride Into the Sun” is a bit different, not as fast or heavy, and containing a different pre-chorus.  It’s still a great, fun Def Leppard song from their brief “NWOBHM” period.  “Getcha Rocks Off” is a Van Halen-style shuffle, a cool tune that really cooks, with hot solos and a couple smoking riffs.   This recording was briefly available on Lars Ulrich’s NWOBHM compilation album.  A heavier live (?) version of this song is available on the On Through the Night album.

Side B was taken up by a 7:50 epic track called “The Overture”.  This song too was re-recorded by Tom Allom for the debut album (that version is just called “Overture”).  Perhaps this song is as close as Def Leppard has ever been to a metal band.  It riffs solidly along with some primitive dual guitar hooks.  There are ample solos, pounding drums, and different sections and tempos.  It’s like Def Judas Maiden.  Or something.

The edition I bought is MSB001 of which 15,000 copies were made.  This edition unfortunately did not come with the picture sleeve.  The original cover was spoof of the His Master’s Voice logo, with a leopard instead of a dog.

I’m glad to finally have this Def Lep collectible.  It’s been a long time waiting. 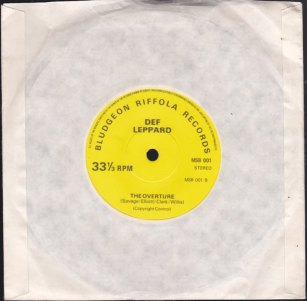 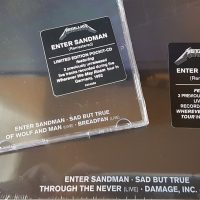