I’ll be brief here, mainly because this is The Beatles, and this music is so ingrained into everybody’s psyches now.   Nobody wants to see me blather on about these songs.  I was very happy with my purchase of The Beatles in Mono, despite the price. I was not lucky enough to get a first run, but Amazon hooked me up with the second run when it was in stock.

The Beatles in Mono is, as far as I know, a complete collection of every mono mix they’d ever done. The Beatles were hands-on with their mono mixes, where George Martin and his staff tended to helm the stereo mixes. This is, therefore, the mixes that the Beatles intended you to hear back in the 60’s. Playing them remastered on a modern stereo today makes them sound that much more fierce and aggresive, noticeably different from their stereo counterparts. In addition many of the actual mixes are drastically different. “Helter Skelter” is the one in particular that jumped out at me. It sounds like a completely different version of the song. Really refreshing after only having the stereo version for 20+ years!

There are some Beatles albums not included in this set, but that’s OK. Let It Be, Abbey Road, and Yellow Submarine were not mixed in true mono. The mono mixes once available of those albums were not mixed by the band.  They were just “fold downs” of the stereo mixes. I guess if you were dying to hear them, you can make your own fold-downs from The Beatles in Stereo set. What is included here is a new compilation called the Mono Masters (a companion piece to the Past Masters) which includes all the non-album mono mixes, and some previouly unreleased ones like “Across The Universe”.

Is it worth the price? Well, the packaging is very nice, each CD is housed in its own little duplicate LP packaging with the white, square box. That means you get the full booklet from Magical Mystery Tour and all the goodies enclosed within the White album. Very nice. The CDs slide in and out, which may not be to your personal taste especially after spending this much money. The call, ultimately, is yours. There is also an exhaustive booklet to consider. 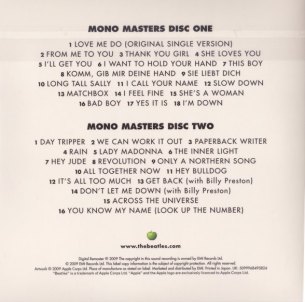 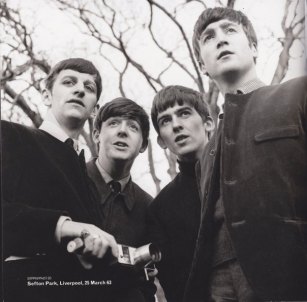