Part 42 of my series of Kiss reviews, leading up to the release of Monster!

When Kiss announced their “farewell tour”, Ace Frehley assumed when they said “farewell”, they meant it.  He didn’t want to continue and so Tommy Thayer was drafted in.   Thayer came to to the attention of Kiss fans while in his band Black N’ Blue, which Gene produced.  He wrote songs for Hot In The Shade, and every studio album since then.  He even ghosted on Psycho Circus, and played Ace in a Kiss tribute band.  If ever there was a guy destined to replace somebody in a band, it was Tommy Thayer.

Kiss Alive IV: Kiss Symphony is a fantastic album, and is certainly better than Alive IV – The Millenium Concert. Say what?  There’s another Alive IV?

Ya’see, back in 2001, Alive IV was announced and then cancelled. I even had a pre-order for it back then, and its picture is included in the Kiss box set as “forthcoming” in the discography section.  It was shelved, and my pre-order cancelled.   But, it was eventually released as the Millenium Concert in the Alive Box.

This is better. Way way better.

Some will accuse Kiss of copying Metallica with the whole symphony thing. Well, then Metallica copied Deep Purple. Even Red Rider, whom have a Kiss connection, did their own concert album with orchestra in the 80’s (The Symphony Sessions). This is nothing new. Nothing in rock is new anymore.

Tommy Thayer performs admirably and very Ace-like, in his place. Peter Criss is here, keeping time remarkably well with an orchestra behind him. I don’t know if he played to a click track or just to conductor David Campbell. I am sure this was a challenge to him and kudos to him for doing so well.

(Incidentally, Peter Criss had briefly left the band prior to Ace, and was replaced by Eric Singer during this time.  This Simmons/Stanley/Frehley/Singer lineup was never captured on album unfortunately.)

Kiss split the show into three sections: Full-on live 4-piece Kiss, then a section of slow songs with a small string section, and then the full-blown Kiss symphony with orchestra. Great move there, it really builds, and it allows for more variety of songs on the album.

Highlights for me included “Sure Know Something”, which might be better than the original version. “Forever” and “Shandi” sound good. but I maintain that Eric Carr is the only drummer who can play “Forever” properly. It’s also great to hear “Detroit Rock City” go straight into “King Of The Night Time World” again, and everything on the symphony disc kicks butt. Biggest surprise was “Great Expectations” — had it ever been played live before?

Note note:
There is a single “highlights” disc available. It is, unfortunately, the source of some frustration for me. Read on.

You see, Kiss did an amazing Ramones cover of “Do You Believe In Rock And Roll Radio?”  The lineup was a rare three-piece:  Paul Stanley, Gene Simmons, Eric Singer.  This song was included on the Ramones’ tribute album, We’re A Happy Family. It has some killer sax, and is among the best cover versions Kiss have ever done.

When the single disc “highlights” version of Alive IV came out, they stuck “Rock And Roll Radio” on it as a bonus track.  So, this version of the album is the only Kiss album where the song is to be found.  I wish it was on the double too.

5/5 stars…with the caveat that “Do You Believe In Rock And Roll Radio?” should have been on here, and I’m mad it’s not. 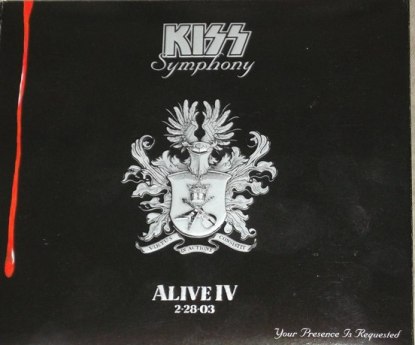