Part 41 of my series of Iron Maiden reviews!  This time, we’ll talk about the Kerrang! exclusive tribute album Maiden Heaven, and a cover tune that didn’t make it onto the B-sides for A Matter of Life and Death.

This will be the last Maiden review of this series before Christmas.  After the holiday we’ll reconvene so be sure to check back! 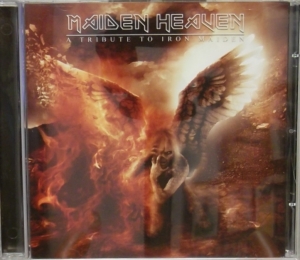 A little bit out of continuity, I wanted to get this release out of the way before we get into the next Maiden studio album.  Maiden Heaven was a Kerrang! exclusive tribute album, probably out of print.  I received this from my bud Dan Slessor who writes for the mag.  It was especially interesting to me for the exclusive Metallica and Dream Theater tracks!  Thus far, neither of these tracks have been reissued on releases by either band!

“Remember Tomorrow” by Metallica is friggin’ amazing.  It sounds exactly as you would expect, retaining the hard/soft vibe of the original, but with Kirk’s slippery soloing and Lars’ machine gun snare fills.  James nails the vocal with his trademark growl.  I would consider this among the very best covers that Metallica have recorded.  As James says, “Yeeeahh-yah!”  Unfortunately, there are no producer credits.

Dream Theater had the guts to cover “To Tame A Land”, one of my personal favourite tracks from Piece of Mind.  Dream Theater have been nothing but courageous their entire career, so it is only suitable that they would tackle one of the lesser-appreciated Maiden epics, and one of the rhythmically most challenging.  Mike Portnoy was still the drummer at this time.  It’s interesting to hear the song performed with keyboards since the original was so sparse and dry (reflecting the planet Dune itself).  But the keyboards lend a more exotic middle-eastern flavour.  It is also interesting hearing anyone but Steve Harris playing the bass line since it is such an integral part of the song.  Nothing against James Myung, the man is an absolute master of his instrument, but any time anybody covers Maiden, the bass always sticks out like a sore thumb because nobody sounds like Steve.  James LaBrie has no problem tackling the challenging vocal, high notes and all.

Other bands that appear on the disc include Coheed and Cambria (“The Trooper”), Avenged Sevenfold (“Flash of the Blade”…woo!), Trivium (“Iron Maiden”) and Machine Head (“Hallowed Be Thy Name”).  Most of the rest of the bands I have never heard of, but I also liked this soft acoustic n’ keys version of “Brave New World” by a band called Ghostline.   One that I definitely hated was “Run To The Hills” by some band called Sign.  It’s just…weird.  Unique, but just wrong.

Overall, an interesting listen but I really only need it for Metallica and Dream Theater. 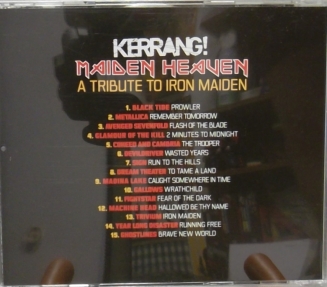 And second, from the brand new Deep Purple tribute album…

Although this came out in 2012, the Maiden track “Space Truckin'” was recorded during the A Matter of Life and Death sessions for use as a B-side. Last time, I talked about the other cover they recorded, “Hocus Pocus” (by Focus!) which made it to the “Different World” single.  “Space Truckin'” went unreleased, until now.

Sonically, it is very raw, sounding live off the floor.  Some fans were underwhelmed by the track.  I think it’s obvious that Bruce is thrilled to be covering his idol, Ian Gillan.  He throws in lots of those little Gillan idiosyncrasies.  “Eee-hoo-hoo!”  While I think Maiden did a fine job on the track (especially considering they don’t have a keyboard player), this is not one of the great Maiden covers.  It’s no “I’ve Got The Fire” or “Massacre”.  It’s still a total treat to hear Maiden gleefully ripping through this classic.  If this was actually live in front of an audience, I think it would have been better received.