“Better late than never or too little too late?” 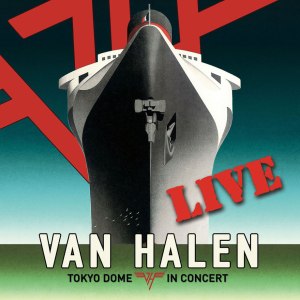 It came especially late, but alas we finally have a live Van Halen album featuring David Lee Roth. Tokyo Dome Live in Concert was recorded on March 22 2013 during VH’s last tour. It’s not the band’s first live album as there has been a live Van Hagar release, but it’s the first with Diamond Dave which fans had been asking for, for decades now. This lineup features the Van Halen brothers (of course) Alex and Eddie with David Lee Roth, and Wolfgang Van Halen au lieu of original bassist Michael Anthony. One has to ask “why a live album at this point late in their career?” but it’s better late than never l suppose. Van Halen’s classic lineup and first six albums with DLR from 1978-84 have touched and inspired generations. It’s all-time classic rock, and there are plenty of masterpieces and classics to be found. The band knows this too, as they perform the songs that everyone wants to hear from those six albums along with a few from the current lineup’s 2012 output A Different Kind of Truth.

The setlist is incredible! I mean seriously look at it (they open with “Unchained”) and tell me that it’s not damn well near perfect. All the hits are there along with favourites and that’s one of the album’s strengths and main appeal. I don’t think l would’ve taken anything out. I wouldn’t have added much more either. Anyone who complains is just nitpicking. I would’ve wanted to see “You And Your Blues” from ADKOT instead of “Chinatown”* but that’s about as picky as l can be. Everything l could’ve asked for is here. Two discs and 25 songs (one is a drum solo) at this price is excellent. Those things l can’t complain about.

Now let’s address the elephant in the room. Yeah THAT one! Roth’s singing. Sometimes he completely leaves out lines, his timing is off or at the very last second, and occasionally he’ll almost talk instead of singing. To his credit he’s getting up there in age and moves a lot during live performances, it’s not getting any easier for him and l know criticism of his voice will be harsh towards this release. I’m trying not to be too harsh, while remaining objective. Granted he doesn’t sound great and there some not so good moments, but Diamond Dave was never truly an amazing singer to begin with. Less so live. He was always known to be the charismatic and energetic frontman and no one could touch him.

People have mixed feelings to say the least about Wolfgang replacing Michael Anthony. I think it hurts them not to have Anthony around because his backing vocals were truly the band’s secret weapon and they improved Dave’s overall sound, something Wolfgang simply cannot do (he does sound a little better now), but he does get the job done on the bass guitar. The backing vocals are not awful, and they try their best (“You Really Got Me” is a good effort) but they could have used Anthony’s presence.  Alex Van Halen has lost nothing with the years and plays incredible.  The “Me & You” piece is amazing. Eddie does what he does best, and surprises us at times adding things here and there being the player we know he is. I can’t say that they really live up to their past glory, but very few bands can and at the end of the day it’s a fun performance.

The sound is very raw and bare-bones, it doesn’t sound like it was overdubbed at all which is one of Tokyo Dome‘s best qualities. I think they were going for a bit of a bootleg sound, not too much as clearly this exceeds a bootleg, but Van Halen wanted a real raw, gritty and heavy feel. Now the audience is essentially nowhere to be found. I own lots of live albums and this has got to be one of the quietest crowds l’ve heard for Van Halen (and a rock concert for that matter). I can only assume they turned them down during the mixing.

On a side note, I think it was a missed opportunity to film the show and have it released as a CD/DVD package**.  I think it would have helped gather even more interest in the band and Tokyo Dome. I’m just glad we finally have some new Van Halen out, and a live one with Dave.

Is it perfect? No. Does it have it’s flaws? Yes. Could it have been more? Well l think if you don’t expect too much out out of Van Halen you will find much to enjoy. The guys are a little older, Dave’s voice has aged and it’s 3/4 of the classic lineup but they can still deliver a good performance and entertain you. Some will completely rip on Dave’s voice and l get it (STOP CHEWING GUM WHILE YOU SING!), it’s the main reason l’m giving Tokyo Dome 3 stars. It does make you long for a proper live release from the early 80’s. The musicianship though, is very good and the setlist incredible.

*LeBrain disagrees.  I like both songs, but “Chinatown” trumps “You and Your Blues”!

**LeBrain agrees.  I don’t know why that wasn’t done.