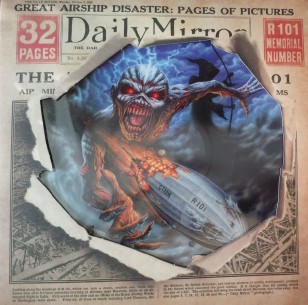 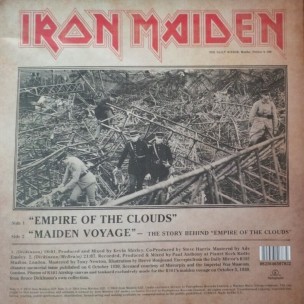 The story of acquiring this single and RSD 2016 can be read right here, so without getting into the details again this is what you need to know:

The picture disc and packaging are gorgeous.  The record is a depiction of the Eddie destroying the R-101 airship, but fear not, this is not how history actually unfolded!  This picture disc is ensconced in a die card cover with reprintings of the Daily Mirror newspaper article from the day following the disaster.  It’s a lovely keepsake for sure, but it also has an exclusive interview on the B-side.

Not that the A side is unimportant.  From my original review for The Book of Souls, I had much praise for “Empire of the Clouds”:

“Written solely by Bruce and coming in at almost 20 minutes, it is unprecedented in the Maiden canon.  Never before have the credits ‘Bruce Dickinson – vocals, piano’ been written inside one of their albums.  For the first time ever, the piano is a part of Iron Maiden’s makeup.  Maiden have used orchestras before, and the strings return as well.  ‘Empire of the Clouds’ is a peak accomplishment, something that they (and Bruce) can proudly proclaim, ‘we did that’.  The piano is a natural fit, in the way it is used to make an epic song even more dramatic.  Aviation has been one of Bruce’s favourite lyrical subjects for a long time, but ‘Empire of the Clouds’ might be his first song about airships.  You can trust him to instil it with all the drama and heaviness that you expect from Iron Maiden.”

Nicko McBrain and Bruce Dickinson discuss the making of the song, almost an album in itself, on the B-side “Maiden Voyage”.  The R101 was a massive airship (“the Titanic fits inside”) that was rushed into service and caught flame in 1930.  Bruce wrote the song on piano, which he had learned to play over the last three years.  He then researched the history of the airship and worked on the words.  The way he describes the incident on this interview track, it was a perfect storm of everything going wrong.  In its context, the airship was an expression of the ambition of the British Empire to stretch to all corners of the Earth and above as well.  Bruce says the crash was the end of this era.

Part of the story involves a storm, so Bruce came up with a piano part to depict that.  Before long he had enough components from his piano writings to build the different parts of the song.   One of the bits was written when Jon Lord (from Deep Purple) was ill with cancer.  After his death, Bruce used this piece for the part when the airship initially sets off.  It’s interesting that this era of British ambition inspired the most ambitious track that the singer had ever attempted.  This includes a musical “S.O.S.” in Morse code, something I picked up on upon first listen.

Bruce has particular praise for drummer Nicko McBrain in the building and recording of this song.  Nicko was not only a help in a technical respect, but also as a cheerleader keeping the band driven, so much was he into it.

Bruce Dickinson is a remarkable individual in heavy metal.  You don’t see many metal stars as well educated in history as Bruce, or as capable at communicating it to his audience.  Indeed, as a presenter on the BBC, Bruce has brought history to many diverse audiences.  You would think Iron Maiden fans would be one of the more challenging groups to reach, but Maiden followers are hungry for this kind of content.  We can only respect the band that much more when we realize the true depth of their work.  This coming from a licensed airline pilot, published fiction author, cancer survivor and amature fencer who also happens to be in Iron Maiden.  Extraordinary!

I’m not sure if this disc was worth the buying frenzy it spawned or the online prices you are about to see, but I’m sure glad I got my copy. 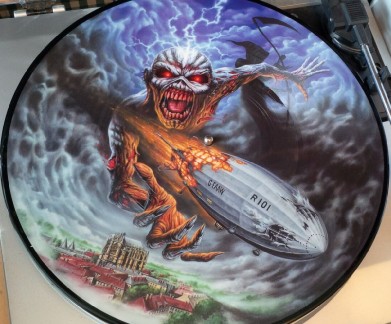 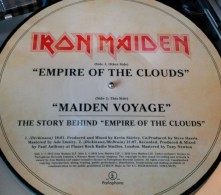 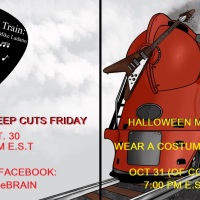 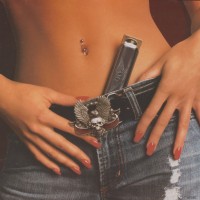 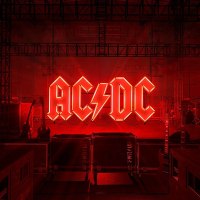 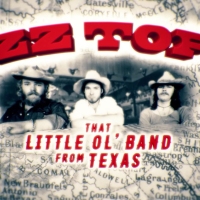 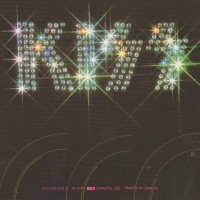 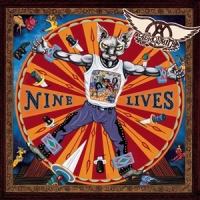 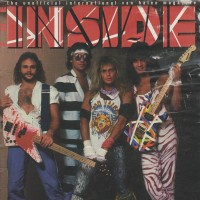