All hail the mighty JHUBNER, decorated hard-core hunter…of records.  Raise your Romulan ale (or what have you)!  Somewhere somehow, the subject of limited edition Faith No More singles for Record Store Day came up.  Mr. Hubner kindly took note that he had seen some at his local establishment.  With great care and expense, he packed it well, armored in a shell of cardboard that could withstand any wayward bombardments.  Thusly, I have acquired “Cone of Shame” on limited edition clear gold vinyl.  Had I thought this through, I would have asked for green, to compliment this burning green alcoholic beverage that Scotty below is hoisting to Mr. Hubner.

This is a gorgeous 45.  The cover art is quite funny: a pug (with eyes blacked out for anonymity) wearing a doggie “cone of shame”.  Would have been better with a miniature schnauzer, but pugs are fine.   The vintage style label is starkly awesome in black & white.  The pristine yellow disc is a piece of beauty indeed, clean and clear and rich with awesome music carved into its grooves.

The A-side is the standard album version of “Cone of Shame” from Sol Invictus.  This is a song I have strongly warmed up to in the last year.  I didn’t care for it at first, but I have since fallen for its weirdness and Patton’s vocal heroics.  Flip over to the B-side and you will find J.G. Thirwell’s “Calcitron Mix” of “Motherfucker”.  I love what he did with it.  Most of Patton’s voice has been wiped leaving only Roddy Bottum’s hypnotic verses.  The word “motherfucker” is chopped and looped to become the main hook.  There is very little of the original song left.  Essentially a new song has been created with Roddy’s “get the motherfucker on the phone, on the phone” hook, chopped up and given the Max Headroom treatment.  The techno backing feels like a bunch of idiots at a rave, but that’s not my thing.  I’m easily amused so the rearrangement and repetition of the word “motherfucker” keeps me entertained.

Remixes are what they are.  You either like them or you don’t.  I usually lean towards the opinion that an original is better than a remix, 99% of the time.  There are the odd exceptions.  I think you need to use a different measuring stick when talking about remixes.  Instead of “did it make the song better”, perhaps the question should be “did it make the song different?”  In this case “Motherfucker” has been reimagined as something new, and that’s pretty cool. 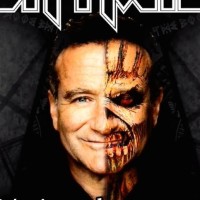