In the spring of 1996, we opened up the big store that I managed. It was our biggest store to date. There were a lot of good times at that location, and hundreds of incredible musical finds. Around the same time, I began replacing my cassette collection with CDs in earnest. Cassettes don’t have the longevity or the sound quality of a CD. Most of my tapes were starting to sound awful, especially the ones purchased from Columbia House, who manufactured their own at a lesser cost.

Upgrading my Kiss cassette collection to CD was an early priority. Some of the first Kiss tapes I bought, like Asylum, had degraded so much they were unlistenable. The early (Canadian) CD releases had issues too; they were not perfect. Both Hotter Than Hell and Alive II (disc one) had severe problems with digital noise in specific spots. On Alive II it was “Love Gun” that was the issue. There was a terrible scratchy sound encoded onto the CD.

The differences between my boss and myself were obvious the day that Kiss Alive! came in stock, used.  It came in one of those old “fat” CD cases.  It was the first chance I had to buy the first Alive! at an affordable used price, in such great condition. The boss and I had very different personalities, almost opposites. I was a music obsessive who collected things and wanted to know all the obscure facts. He liked music but just wanted to sell CDs. I grabbed that copy of Alive! and handed it to the boss to ring in with my staff discount.

He sighed and gave me a look. “Don’t you already have this?”

He sounded like my dad. When I’d come home, he’d say, “More Kiss? Don’t you already have Kiss?” My boss had a lot in common with my dad.

I had the tape, but the cassette had the songs in a different order.  This was a fairly common practice.  Song order would be swapped around on cassettes, to keep sides one and two about equal in length. That reduces the amount of actual tape used to manufacture it, and therefore cuts costs. It would be cool to have a CD copy of Alive! to listen to the songs in the original order.

“I have it on cassette and LP,” I explained.  “I listen to the tape, but this CD is different.  The songs are in a different order,” I finished.

He looked at me again and responded in a mocking tone, “Hey Mike, look at my shoes. The left one is different from the right one. Do you want to buy it?”

“No because I don’t collect shoes,” I answered. “I collect Kiss.”

He shrugged with frustration. I really think he was more just pissed off that I had taken some good stock for myself.

Staff taking “good stock” was an ongoing issue, but because getting stock at a discount was one of the established perks of working at a used CD store, there wasn’t much that could be done. I’ll give him credit; the boss considered the staff discount to be part and parcel of the job for all of us.  He eventually put a limit on how much we could buy at a time. Meanwhile, my dad would look at my collection and say “sell, sell, sell!”

He might not have understood my wants and desires as a collector, and he may have complained about me taking all the good stock, but he ended up making money when I sold back my equally good stock. No harm, no foul. Hopefully, I have bought Kiss Alive! for the final time. 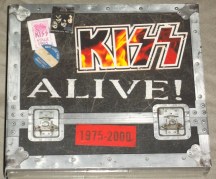