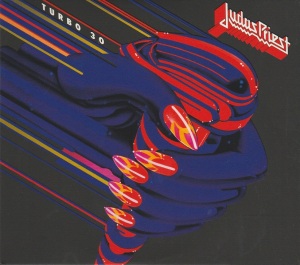 It is sheer delight to see Judas Priest’s once maligned Turbo to finally see some vindication.  There was a time this album was shied away from completely.  They played no tracks from it on the 1990-91 Painkiller tour.  In 1990, Priest finally pulled themselves out of a slide into dangerously commercial territory.  For a long time, Turbo was considered a musical detour that did more harm than good.  However the frost thawed quickly and Priest began to put the title track back into the set around 2001 for their Demolition tour with Tim “Ripper” Owens.  Today there is no longer any shame in cranking Turbo while hoisting a tall cool one.

The 30th anniversary edition of Turbo contains a freshly remastered edition and two live discs.  The sound is greatly improved from the 2001 version from the Priest Re-masters series.  As you can see by the waveform below, the 2001 version at bottom was a victim of the “loudness wars”, and much of the dynamic range was lost by pushing it to overdrive.  The 2017 version at top has more peaks and valleys.  The new version wins for overall for having more warmth.

What the 2017 version does not have are the two bonus tracks included on the Priest Re-masters version.  They were a live version of “Locked In” (which would be somewhat redundant here) and an unreleased studio track called “All Fired Up” which sounds like a Ram It Down outtake.  For a complete review of Turbo and these bonus tracks, please refer to our review of the Turbo 2001 CD edition.  The rest of this review will focus on the two live CDs inside Turbo 30.

The Fuel For Life tour that followed Turbo was one of Priest’s biggest.  Their stage featured a riser that “transformed” from a race car to a robot that would lift Glenn Tipton and KK Downing in the air with its claws.  It was commemorated by an album (Priest…Live!) and a separate home video from a concert in Dallas, Texas.  This new double live comes from a show in Kansas on May 22 1986.  It is 100% superior to Priest…Live! by every measure and could supplant that 30 year old album in your collection.

The set list varies a little from Priest…Live! but hits the same key tracks.  The ballsy synth ballad “Out of the Cold” still opens the set, a brave move even in 1986.  It is certainly the most unexpected of all Priest’s openers, so bravo.  “Locked In” is restored to its spot in the set; it was not on Priest…Live!  A version from an unknown concert (the liner notes are vague) was on the prior edition of Turbo as a bonus track.  “Locked In” isn’t a major track but still important due to its place as part of the “Turbo Lover” music video duology.  This live version is the best yet, loaded heavy with plenty of guitar thrills not present on the studio original.  From there it’s on to “Heading Out to the Highway”, nicely in the pocket.  Rob Halford’s screams are ferocious.  Next is the march of the “Metal Gods”, another version far more lively than the one on Priest…Live!  Seems there is much less mucking around with the recordings this time.

“Breaking the what?  Breaking the what?  Breaking the what?”  It’s that silly yet tried and true song intro.  Post-British Steel, you just can’t have a Priest live concert without “Breaking the Law”.  But always remember, that in the dead of night, “Love Bites”.  From 1984’s Defenders of the Faith, “Love Bites” was very different for Priest but still a set highlight.  (Incidentally, British Steel and Defenders of the Faith are the other Priest albums that had recent triple disc deluxe editions with live albums.)  Then more from Defenders:  Two killers in a row, “Some Heads are Gonna Roll” and “The Sentinel”.  Two songs that fans never tire of, and some credit must be given to the mighty guitar duo of Tipton and Downing.  Their trade-offs are sublime, and Halford curdles the blood.

Back into new material, “Private Property” was one of Priest’s more obvious grasps for a hit.  It’s far from a must-have, but better at least than the version on Priest…Live!  A mere five minutes later you will be transported to the “Desert Plains”, a Point of Entry deep cut that was excluded from Priest…Live!  It is far faster live and stay tuned for a long voice-shredding breakdown by Halford.  (Rob was clean at this point in his life.  Rob Halford recommends vocal rest between shows, menthol eucalyptus gum, and herbal tea to maintain a strong voice.)  A frantic “Rock You All Around the World” from Turbo ends the first disc with a filler track that is again better here than on the prior live album.

Screaming for Vengeance brings the fury for disc two, “The Hellion” (taped intro) and “Electric Eye” bring the focus clearly back to heavy metal, just in time to go for a spin with “Turbo Lover”.  This song is now a beloved classic, finally appreciated for its sharp songwriting and adventurous production.  Downing and Tipton pushed synths into heavy metal in a big way, but with integrity and ingenuity.  Better run for cover indeed, and fast…for next is “Freewheel Burning”, a natural for keeping with the theme of turbos and the like.

As the disc roars to its close, we are treated to some serious historic Priest.  The oldest track is “Victim of Changes”, from the immortal Sad Wings of Destiny (1976).  This most dramatic of Priest compositions is always welcome in the set, yet was not on Priest…Live! probably to avoid overlap with 1979’s Unleashed in the East live album.  This one boasts a blazing hot guitar solo and some of Rob’s most impassioned wailing.  This stretches out for nearly nine minutes of pure metal brilliance at its most vintage.  But the vintage metal gift-giving is not over, because “The Green Manalishi” (1979’s Hell Bent for Leather, via Peter Green’s Fleetwood Mac) delivers the greatest of all riffs.

It’s nothing but the hits from there:  “Living After Midnight”, “You’ve Got Another Thing Coming”, and “Hell Bent for Leather”, the standards that everyone knows.  “Another Thing Coming” is stretched out with Rob’s annoying back-and-forth with the crowd, but it is what it is.  “Heavy metal communication”, he calls it.  Nobody is buying this CD for another version of that song anyway.

“You don’t know what it’s like!”  So get this package, the triple CD set, and you will! 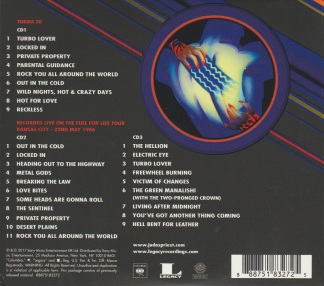 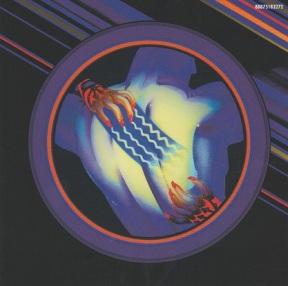 For Superdeke’s amazing review including some tidbits about who the drummer(s) on this live album really is (are), check it out:  superdekes.wordpress.com/2017/02/06/judas-priestlive-in-kansas-city1986