Kiss’ Revenge album (last discussed in Part 43 of the Kiss Re-Review Series) was an album that I had been waiting for a long time.  Not just in terms of the three year gap between it and Hot in the Shade.  I loved Kiss, but it had been a long time since they put out an album quite as solid as Revenge.  I wore my Kiss shirt with pride.

I can still remember the day I got my Revenge shirt, in Kincardine Ontario of all places.  My parents bought it for me at a local now-defunct clothing store.  As we browsed my dad asked, “Did you find a shirt, son?”

“Yep,” I answered.  “This one is cool, because it has the new Kiss member on it.”

“Yeah,” my dad said with a disapproving smirk.  “I don’t think I’ve ever seen that bearded guy before…”

But the new guy wasn’t Gene Simmons, silly dad.  It was the blonde Eric Singer, the first guy to break the Kiss hair colour code.  Yeah, I was proud to rock that shirt.

The parents were good to us.  Any time there was a record show (or record faire) within an hour’s driving distance, they would take us.  You usually had to drive to either Guelph or London.  Sometimes they’d even help us out with a little cash.  No matter how much you budget for a record show, you’ll never bring enough cash.  The treasures are far too numerous and tempting.

One has to learn to categorise and quantify things in order to successfully navigate a record show on a limited budget.  I have really distinct memories of one in Guelph; the one where I found the indispensable Kiss Unholy Kisses bootleg.

I knew going in that I wanted to buy a bootleg on CD.  I had a few on cassette, but never a CD before.  Record shows always had a table or two with guys selling CD bootlegs.  They were never cheap and you could typically expect to pay $40 for a single CD.  That’s how I budgeted it out. 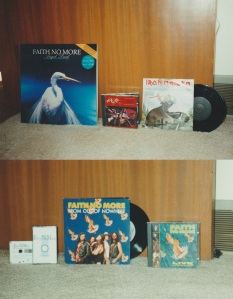 I did plan to buy a little more than that, so I brought extra cash.  My first buy was a 7″ single for “From Out of Nowhere” by Faith No More, a UK import.  It had two live tracks on the B-side (“Woodpecker From Mars” and “Epic” recorded by the BBC).  I was trying to get a decent Faith No More collection so I picked that one early.

Meanwhile my sister found Bryan Adam’s first single, “Let Me Take You Dancing”.  Bryan started as a Disco artist, and his voice was sped up in the mixing in order to make it higher.  He has since disowned the song, and a CD release in any official capacity is highly unlikely.  She definitely found something of value to her.  As an added bonus, the record came with a story.

“I tried to get Bryan Adams to sign it,” said the vendor.  “I handed it to him and he refused.”  So my sister owns a record that Bryan Adams actually refused to sign and we both think that is pretty hilarious.

One thing about record shows that you need to be aware of:  there are always some vendors who are assholes.  It’s just part of the scenery of a record show.  As my sister and I looked around, one of them shouted out at her.

“People will think you stole that,” he said pointing to her Bryan Adams record.  “It’s not in a bag.”

We explained that she bought the record from another vendor.

“You need a bag.  Buy something from me and I give you a bag.  People will think you steal.”

“Here, put it in my bag,” I said to my sister.  “No thanks,” I added to the vendor, as we made sure not to buy anything from him.  He didn’t have anything we wanted anyway.

But what about bootlegs?  That decision had to be weighed.  There was so much to choose from.  The Black Crowes?  Black Sabbath?  They had a CD of early Def Leppard tracks with Frank Noon on drums.  That one was sorely tempting.  Leppard were another band I was trying to collect.  What I really hoped to find though, was Kiss.

There it was:  Unholy Kisses.  Recorded live in San Francisco April 23, 1992.  Revenge wasn’t even out yet when it was taped.  Although other Kiss bootlegs were present, I chose Unholy Kisses for a number of reasons.

I chose wisely.  Unholy Kisses is a great fucking bootleg.

The club setting provides for a very loud concert recording.  It only amplifies the raw heavy new sound of Kiss.  Bruce Kulick nailed a greasy toned and Eric Singer?  Holy shit, did the oldies ever sound amazing with him behind them!  Yes indeed, the new Kiss lineup was excitement personified.  God bless Eric Carr, who will forever have a place in every fan’s heart.  With Eric Singer, Kiss found a credible way to carry on.  Any new member brings their own style and influence to Kiss.  When a drummer is a talented and versatile as Eric Singer, it enables a band to really play.

And strangely enough, during the Singer/Kulick era, one could make serious arguments for Kiss becoming a player’s kind of rock band.  Kulick, for certain, is one of the most talented guys to ever play guitar in Kiss, up there against Vinnie Vincent.  Kulick can play absolutely anything and strove to do new things on every Kiss album.  Whatever Bruce wrote, Singer could play.  This would spill onto the next studio album.

The Kiss Re-Review Series does not require another Unholy Kisses review.  It is bang-on.  For your convenience, you will find the full review below.

If you are even just a casual Kiss fan, pick up Unholy Kisses if you find it in the wild.  There are few official live Kiss albums as good as this. 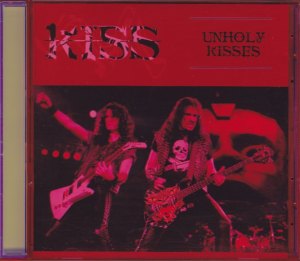 That’s how Paul Stanley introduced the legendary Kiss on their stripped-down 1992 club tour, April 23 1992 in San Francisco.  The Revenge album was a “reboot” of sorts, out of necessity.  New drummer, new attitude, and a return to the producer (Bob Ezrin) who helped make them huge.  A return to the clubs without the lights, stage show, and costumes helped Kiss transition into the 90’s.  If this one bootleg CD is any indication, then the club tour was a huge success.

Eschewing their normal opening routine, the band entered to the sound of “Love Gun”, but heavier than ever.  Many fans consider the Simmons/Stanley/Kulick/Singer lineup to be among their best, and this live bootleg proves why.  In fantastic voice, Paul leads this devastating lineup to demolish the clubs in their wake.  Full of adrenaline, “Love Gun” is faster than its studio counterpart, and Bruce Kulick creates his own individual guitar solo that fits the track.

Gene’s next on “Deuce”, the new lineup infusing it with menace.  The CD, though obviously a bootleg, sounds great.  Even though the drums are a bit distant you can hear that Eric Singer has come into the band paying homage to the drum parts he inherited.  Then Paul takes a moment to tell the audience that they’ve been so fired up about the way Kiss have been sounding, that they just got to come down to San Fransisco and play.  A rough opening to “Heaven’s On Fire” is a mere hiccup after they get going on the hit single.  For the first time you can clearly hear new guy Eric Singer singing background vocals.

“You ready to hear something old? One of those Kiss klassics?  Bruce – let ’em have a taste.”  Then the shocked audience picked up their jaws as Kiss slammed through “Parasite” for the first time since 1976.  Returning to songs like this was critical for a band who spent the 80’s largely ignoring the deep cuts.

One thing I love about bootleg CDs is the chance to overhear some audience chatter.  “Shout it Out Loud” however is marred by one nearby fan who keeps singing “You got to have a party,” even when that’s not the current part of the song!  Minor beef, as “Shout it Out Loud” rocks and is another song that was tragically ignored during most of the 80’s.

“How many of you people have Kiss Alive?  Gene must know this one.  Gene’s got Kiss Alive.  Goes like this!”  There begins “Strutter” (also from the first Kiss album) and the crowd goes nuts.  “Dr. Love” follows, with Eric Singer showing off some fancy footwork on the double bass drums.

Fans who were shocked by these old tunes must really have lost their minds when “I Was Made For Loving You”, heavy as hell, tore through the club.  “I Was Made For Loving You” was re-imagined as a chugging metal track and in the club environment, it’s only more raw and aggressive.  Then Paul lets another bomb drop when he introduces “100,000 years” from the first album.  “Oh my God!  I don’t fucking believe it! I do not fucking believe it!” says one nearby fan, obviously excited by this rarity.  It’s incredible how well Bruce and Eric adapted to the sound of old raunchy Kiss.

But what of new Kiss?  The band weren’t ready to start unveiling all the new songs, as Revenge hadn’t even come out yet.  They did roll out two: the first single “Unholy”, and album cut “Take it Off”.

“We got a new album about to come out,” begins Paul.  “And I’ll tell you something, this album is the shit.  I’ll tell you, this album is our fuckin’ Revenge and when you hear the album you’ll know what I’m talking about.”  Indeed, as promised the new songs kick ass, though “Unholy” is kind of awkward in the live setting.  “Take it Off” is more like Kiss.

It’s all oldies from here.   Aside from the new Revenge songs, the most recent track that Kiss played here was “Heaven’s On Fire” from 1984!  (Note: this CD is not the full concert and 1985’s “Tears are Falling” was also played that night.)  I think it’s safe to say that Paul and Gene understand some of the errors in direction they made over the last 10 years, and successfully steered the ship back on track.  “Firehouse” and “Cold Gin” from the first album are present. “I Stole Your Love”, “Detroit Rock City”, and “I Want You” close the CD.  “I Stole Your Love” with the backing vocals of Eric Singer is top-notch!

The songs played that night that aren’t on this CD are “God of Thunder”, “Lick It Up”, “God Gave Rock and Roll to You II” (its live debut), “Rock and Roll all Nite” and the aforementioned “Tears Are Falling”.  Too bad this is only a single CD bootleg, but bootlegs were so expensive that a double would have cost at least $60-80.  If it was a double, I never would have bought it and heard what I have of this awesome show! 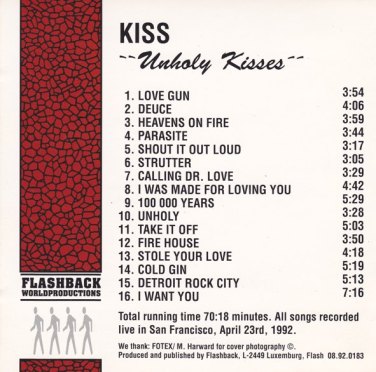