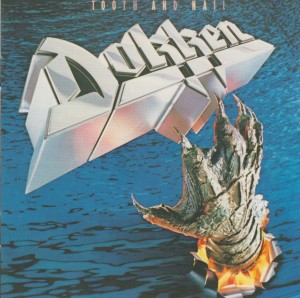 Dokken always served up large helpings of cheese. Within the framework of 80s hard rock, their second album Tooth and Nail has been elevated to the status of classic.  Produced by Tom Werman and armed with nine great songs, Dokken were poised to move on to the big leagues.

The brief instrumental opener “Without Warning” leads directly into the full speed chug of “Tooth and Nail”.  George Lynch was the obvious star on guitar, but “Wild” Mick Brown certainly blows the doors off with his high speed drum work.  Don Dokken could hit the high notes when required, aided and abetted by bassist Jeff Pilson.  The quartet could go hard or soft, or right down the middle.  “Just Got Lucky” is perfect in the centre.  Not too heavy, boasting a chorus that sticks, and a fiery hot guitar solo.

The lesser known “Heartless Heart” gets by for its Lynch chugging, though its chorus is left wanting.  Even chuggier:  “Don’t Close Your Eyes”, which Lynch leaves a smoking ruin:  Don screaming over the wastes left behind by the incessant rocking.  And that’s side one.

Dokken were especially good at slower, heavy songs.  “When Heaven Comes Down” is one of those.  Lynch’s riff holds the fort while Don conjures apocalyptic imagery.  Then a classic:  “Into the Fire”.  This song has it all.  The chorus and riff are topped only by a killer middle eight and a flammable solo.  You can pass on the cliche “Bullets to Spare” which sounds like a Quiet Riot B-side.  But don’t miss “Alone Again”, one of the best ballads from the entire decade.  It defines the term “power ballad” all by itself.  From the words, to the melody, to the legendary Lynch solo, “Alone Again” sounds as good today as it did then.

Finishing it off you’ll get the incendiary “Turn On The Action”, a cross between Van Halen, Motley Crue, and 2/3rds of the Sunset Strip.  It’s a good closer, but derivative and absolutely a product of its time and place.

Tooth and Nail is two or three songs shy of 5/5 rating.  Though you may debate it among yourselves, Back For the Attack and Dysfunctional are superior albums.  Tooth and Nail, however, has something they don’t have, and that is a high percentage of Dokken concert classics.  “Alone Again”, “Just Got Lucky”, “Into the Fire” and “Tooth and Nail” are all cornerstones of a Dokken collection. 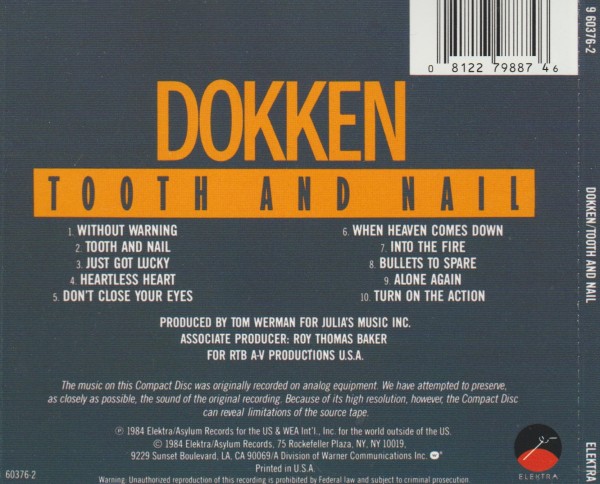 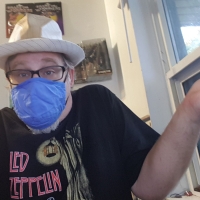 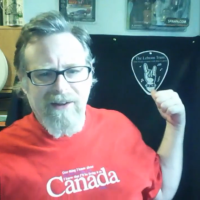 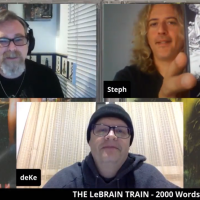 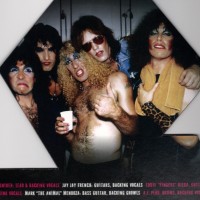 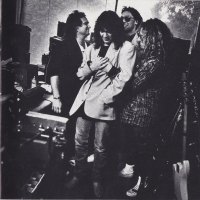