This is where things go a little off the rails, so make sure your seatbelt is fastened securely.  We are about to journey through 12 bonus tracks, which run the gamut in every vector.  In terms of quality and origins, it’s the proverbial “bumpy ride”.  Worst of all, if you wish to partake in this voyage, it will cost you dearly.  In order to acquire all 12 bonus tracks, you will need to purchase four separate CDs, and an Infinity Gauntlet.  Maybe.

When I first encountered the album Sirens and its accompanying mini-album The Dungeons are Calling in the mid 90s, they were on cassette, separately.  There were no liner notes but I surmised them to be the first two Savatage releases.  It was impossible to find quality discographies in 1993, so my first time learning they existed was when I bought them.  These were not the rare Canadian Banzai editions, but the standard US releases on Combat.  (Amusingly, the sides listed on Sirens were Side A and Side Z.)

Just as nature has its rules, so does music collecting.  Everything owned on cassette must be upgraded to CD.  By 1994 I was working at the Record Store, and the day we received notice that these albums were being reissued on CD was the day I ordered them for myself.  The reissue, by Metal Blade, handily put both records on one CD, with four bonus tracks to boot.  The cover was even reversible.  You could display the CD with either Sirens or Dungeons as the front artwork.  On the back:  a live photo of late guitarist Criss Oliva just giv’n ‘er on a string-bending solo.

There are two bonus tracks tacked onto the end of Sirens, and two more after Dungeons.  They remain the champions of bonus songs in the Savatage ouveur.  One is a hellbent live take of “Sirens” from the Gutter Ballet tour in 1990.  It’s the same version as the bootleg CD U.S.A. 1990.  The amusing thing here is that Jon Oliva clearly addresses the crowd as “Hello Deutschland!”  Well, that ain’t in the U.S.A., just a note to you bootleggers out there!  It’s a little bootleggy and not the same lineup as the rest of the albums, but hey — it was 1994 and this “bonus track” thing was relatively new.  It’s a blistering memento with the classic version of the band:  Jon & Criss Olivia, Steve “Doc” Wacholz, Johnny Lee Middleton and Christopher Caffery.

The other three bonus tracks are studio demos, and two of them ended up reworked on the later album Fight For the Rock.  “Lady in Disguise” is thoroughly different, an acoustic-electric ballad superior to keyboard-inflected later version.  Similarly, “Fighting for Your Love” was reworked as “Crying for Love” on Fight for the Rock.  Demo quality aside, this original has more desperation & ferocity, while the remake sounds forced.  Finally “The Message” hasn’t been issued anywhere else in any form.  This very rough take sounds like a garage recording, but even through that you get one super-snakey Criss Oliva riff and a lung-bursting Jon Oliva chorus.  “The Message” flat out rocks, and could have replaced a number of inferior album tracks had it been better committed to tape.

Metal Blade did an awesome job with their 1994 CD of these albums, filling it to the brim with 76 minutes of metal including top-notch bonus tracks.  Eight years later, they decided to have another go at it.

Dipping their hands into the cookie jar once more, Metal Blade came up with seven more bonus tracks (though two are unlisted).  The tracks are remastered, and the covers updated to black & chrome, with the Savatage logo in bold, bright silver.  The original artworks are consigned to the CDs themselves, while the booklets contain (small) rare photos (in black & chrome) and half of a Savatage timeline.  Yes, half a timeline – driving the point home even further, you have to buy both CDs to get the entire timeline (and special note from drummer Steve “Doc” Wacholz).

The Dungeons are Calling

This time, Metal Blade placed The Dungeons are Calling first in line, before Sirens.  (You can tell this by the lower catalogue number and the first half of the timeline included.)  It contains three “lost tracks”.  The first, “Metalhead” has a slick vibe, like 80s Judas Priest on speed.  Criss’ solo is a burner, with these super-wide note sweeps that make your head spin.  “Before I Hang” is lo-fi, solid headbangin’ fun.  Nothing particularly memorable, but unquestionably Savatage.  Purely filler, the kind of track that didn’t get finished because they had better stuff to work on.  The last of the three “lost tracks” is a ballad, “Stranger in the Night”.  If you listen carefully, you can hear that this was completed as something else later on — a little epic called “Follow Me” on 1993’s Edge of Thorns!  Now that’s some serious cool.

Didn’t I mention unlisted bonus tracks?  This one is a gentle acoustic number with spare accompaniment.  It sounds like it was recorded much, much later.  You’ll find it at track #99.  How quaint.

The second CD in the 2002 has two more bonus tracks, and one more unlisted…something.  It’s something.  We’ll get to that.

“Target” sounds like idiosyncratic Savatage from the start:  The Criss riff that can sound only like Criss Oliva.  The haunting vocals from his brother Jon.  It’s hard to say definitively when it could have been recorded, but it sounds circa Gutter Ballet in structure, tone and performance.  “Living on the Edge of Time” is sonically thin but is clear enough to deliver a screamin’ chorus.  If that chorus only could have been housed in a finished song!  It’s killer.

What is far, far from killer is the novelty rap that sits at #99.  It’s…about a fat old guy who sits around all day doing coke?  It’s…fucking terrible is what it is.  It’s the kind of terrible that actually stains the CD it’s on.  Like you will have to hit “stop” before anyone hears you listening to it.  One has to conjecture that this “song” originated when Jon Oliva was deep into the white stuff, but it’s the kind of all-advised joke that should have stayed on the inside.

Another eight years after Metal Blade butchered these releases, Ear Music took a shot with “The Complete Session”.  What does “The Complete Session” mean to you?  I’ll tell you what it means to me.  It means all the tracks.  All the fucking tracks!  Not “none of those tracks but oh here is a new acoustic version from Jon”.  Not that.

Ear music reissued the entire Savatage catalog in 2010 as an attractive looking set that, when combined, form a Savatage logo.  The albums are remastered by Dave Wittman and feature new liner notes by Jon Oliva.  What’s really pesky are the new acoustic bonus tracks recorded to make you buy these albums all over again, in this case the fourth fucking time.

Originally from 1985’s Power of the Night (their very next album in fact) is the ballad “In the Dream” performed on piano by Jon Oliva, with an (uncredited) acoustic guitar solo to match.  It’s a good ballad; great in fact.  There’s no critique being laid at the feet of the song or the new version.  Just at the damn record companies for not giving a fuck for how many times I’ve had to buy this to get “all the tracks”.

Most people only want to buy an album once and be done with it.  Here’s a rating system below to determine which suits your needs best, price notwithstanding. 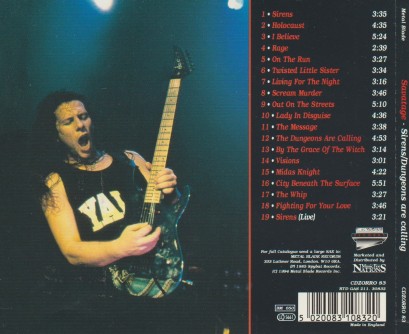