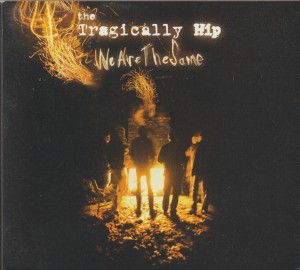 “Later” records by bands are often overlooked in favour of a handful of classics, usually released early in a band’s first decade.  Here is one that should not be ignored:  We Are the Same, The Tragically Hip’s mellow 2009 offering.  Sure, the Hip had plenty of late career highlights.  But something about We Are the Same just connects.  It’s like plugging your soul into the great wide Canadian open, autumn-coloured maple leaves tossing in a cold breeze.  The rustling is accented by a softly wafting smell of coffee.

We Are the Same sounds (for a largely acoustic album anyway) absolutely massive.  Thank you, Bob Rock.  Perhaps there’s even a concept to this Gord Downie-driven album: it opens with a song called “Morning Moon” and ends with “Country Day”.  From the beginning, the chords of the Canadian prairies jangle on acoustic guitars.  Familiar hints of Neil Young and Gordon Lightfoot fill the room, while Downie sings of a golden Labour Day.

You’ll hear lush string and piano accompaniment all over We Are the Same (piano by Barenaked Ladies‘ Kevin Hearn).  Take second track “Honey, Please” which is as pop as the Hip were ever likely to get.  Johnny Fay’s snare drum splashes are the only recall from the old days.  Then, one of the most luxurious tracks.  It’s also one of the best: album highlight “The Last Recluse”.  It delivers strange melodies wrapped in lonely imagery.  “Who are you? The last Canada goose”.

Geoff over at 1001albumsin10years says “I  have argued it is the best side 1 in the catalogue.”  I wouldn’t dare disagree.

“Coffee Girl” with its loop-like drums and trumpet solo is one of the more unusual, but also most successful compositions.  Downie had a miraculous way with words.

Your favourite mixed tape,
You popped it into the deck,
Don’t care if it’s out of date,
Old Cat Power and classic Beck.

The first big rock chords come crashing down on “Now the Struggle Has a Name”, also adorned with regal strings.  As great as it is, it’s just preamble to a Hip epic:  “The Depression Suite”, a multi-parted masterpiece.  It sparkles and growls, brilliantly and eloquently through a maze of quintessential Gord travelogue lyrics.

Peaking with a track like “The Depression Suite” only means the second half of the album has much to live up to.  An Aerosmith-like “The Exact Feeling” (can’t you just hear “Jaded”?) is the first song that feels like a drop.  But then “Queen of the Furrows” is a gentle acoustic song with delightful picking.  Until an explosive chorus kicks in, drawing your attention again.  Cool noisy guitar solo to boot!

The final four tracks are consistent, with “Frozen in My Tracks” being the strangest and heaviest, and “Love is a First” the strongest.  Its’ beat poetry and sharp bassline are the main hooks, but the chorus is a blast.  Yet it’s still clearly a case of the final few songs living in the shadow of the first.

An album this brilliant needs to be enjoyed over time, but do be sure to add it to your collection.  [See below for our recommended edition.]

…Since you’re going to need this album one way or another, our recommended version if you can find it, is the “Kollector’s Krate”.  Kool Krate’s were an inconvenient way to store discs, but here’s one with a Tragically Hip logo on it.  Stuffed inside: a We Are the Same T-shirt, and a rare live bonus CD.  Whether Live From the Vault Vol. 4 is worth over $300 or not, that’s between you and Discogs.  (And that’s just the CD, without the Krate or T-shirt!)