One of the greatest joys of youth was improvising.  What continues today with music and tech, started back then with toys.  We made our own games with what we had.  Bored with the toys already sitting in the basement, we simply invented new ones of our own.  Board games using army men as the pieces, or Star Wars playsets made of shoeboxes.  We did it out of boredom and necessity.  Kenner didn’t make a Cloud City playset, and even if they did it would be too large and expensive.  Instead we made one ourselves, complete with sliding carboard pocket doors.  It had multiple levels and was scaled to work with Kenner figures.

At the cottage, the need to improvise was multiplied.  We couldn’t count on TV for entertainment, with only two channels.  We could not bring all our toys and games with us to the lake.  Therefore we had to have fun with what we had.  For the first 10 years or so, the cottage was under constant construction.  Rooms were not finished all at once, but a little bit each year.  Same with exterior elements like porches and sheds.  That meant there was always scrap wood, nails and a hammer available.

I recently dug up some of our cottage improvisations.  They date back 35-40 years.  These haven’t seen the light of day in so long, that there was also an abandoned nest of some kind in the box.  Unsurprisingly, given my early penchant for being a Tony-Stark like arms dealer, all these home-made toys are built for war!

First up are my weapons.  My dad made me a bow and arrow when I was a kid.  The bow broke but he kept it along with one of my arrows.  I can see where I taped a little fin on the arrow.  The arrows were not sharpened; there were no tips.  It was just to see how far I could shoot them.  Not far!  You couldn’t really hurt anyone.

Also in the weapons locker was my old tomahawk.  I found the perfect stone and branch, lashed them together, and voila!  35 years later my tomahawk is still intact.  I can’t believe this stuff wasn’t burned up for firewood ages ago.

Next, and ripe for a tetanus infection, is our little flotilla of battleships.  We always had offcuts hanging around.  These look to be made of tongue-and-groove panelling.  Decent toy boats were always hard to find.  They were either super fragile, or leaked and sank.  Our boats always floated and were armed to the teeth.  Look at the all the guns!  Rotating turrets too.  My sister’s boats weren’t as sophisticated as mine.  She got into the boat making game too, adding her own graphics and designs.  We brought these boats down to the water and had some pretty fun adventures.  And nobody got hurt on the rusty nails. 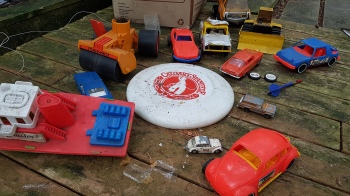 Finally, we had some plastic beach cars and trucks that we always had a blast with in the sand.  We built roads and bridges.  I found plain old cars a little more boring than my sister did, so I took things into my own hands.  I got my favourite yellow pickup truck, and armor plated it.  My mom gave me hell for using too much tinfoil.  “Expensive!” she would always remind me.   But I had to take my time and get it right.  I had to do it twice.  The idea was to leave no Scotch tape visible on the outside.  At the end I had a shiny silver armored pickup truck.  And amazingly enough, some of that armor plate is still on the truck.   It was combat ready.  I always thought it would be cool if I could find a little helicopter to hang out in the truck bed, but I never did.

I found these old toys sitting in a cardboard box in the shed when I was looking for dry firewood.  Of course there was no way I could burn these up.  The battleship, which I have now dubbed Bismarck, might even float again one day.  They’ll never sink the Bismarck! 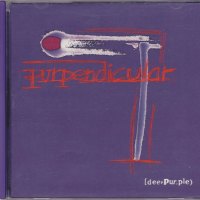 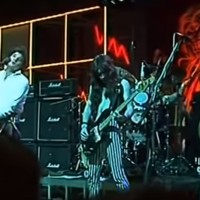