MuchMusic ran this Sandbox special shortly after the band announced their sad demise at the end of the 1990s.  Since every cloud has its silver lining, we can be glad that guitarist Mike Smith found greater success as Bubbles from the Trailer Park Boys.  This collection of interviews and live clips was run on the MuchEast program as “The Sandbox Wake”.

This memorial covers the band’s early days, writing terrible songs, improving, eventually getting signed and then onwards to the second LP.  The clips cover 1995-1997.  Graceland, The Junos, the East Coast Music Awards, concert footage…it’s here in this motherlode of Sandbox on MuchEast.

Seven years after Johnny Cash passed, Rick Rubin released American VI: Ain’t No Grave. It is billed as the “final Johnny Cash studio album”. Listening to it is simply an awesome experience. It’s one of the finest of Johnny’s American Recordings.  I think my favourite is American IV: The Man Comes Around, but American VI is a contender.

Beginning with the dark, powerful “Ain’t No Grave”, Johnny is defiant. He does not fear death. “Ain’t No Grave” has more accompaniment than most of the tracks on this album, which are adorned only by the odd piano keys, steel guitar, or rhythm. Johnny’s voice is weak, yet that baritone is still so defiantly powerful. Even in illness, Johnny refused to stop making music, his aching voice a shadow of what it once was. Yet even that aching voice stirs powerful emotions through the music. Only Johnny could sing these songs the way he did.

Mortality is a common theme.  Other highlights for this listener included:

I know Rick Rubin lovingly produced these final six Johnny Cash albums, befriending the man and earning his trust. Knowing that, I trust that Rubin finished these songs the way that Johnny would have wanted them to sound.  Mike Campbell and Benmont Tench from the Heartbreakers are among the musicians involved.

I do love what Rubin did with the packaging. A picture of Johnny as a boy on the front, a ghostly Johnny gazing through a window on the back, no song list on the cover. Inside is a booklet with a copy of Johnny’s handwritten lyrics to “I Corinthians 15:55”, a really cool touch. No liner notes. Rubin lets the music speak for itself.

All of the American recordings (which also included the fine box set Cash Unearthed, and 1998’s live VH1 Storytellers with Willie Nelson) will go down in history as some of the most important country recordings of our lifetimes. Personally I cannot think of another artist in any genre who was so prolific in his or her last days. The fact that these final recordings are so diverse, so strong, and so powerful are a testament to the Man in Black. 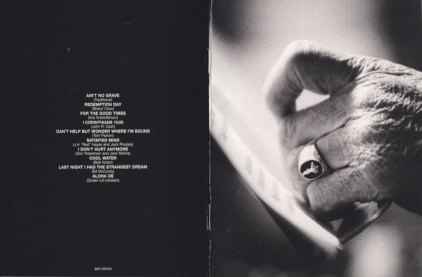