Dave Mustaine is a visionary, there is little question of that. He knows what he wants with each record and goes for it. With this one, “precision” was the word of the day. Recorded digitally, Countdown to Extinction is perfection embodied. Not one bum note, every beat is metronomically correct. So what could possibly be improved on a remaster?

This excellent series of Megadeth remasters are actually all remixed from the original tapes. This was done with Dave himself at the helm, still the perfectionist. Countdown being flawless already, I’m sure he didn’t have to do much remixing. You can hear some changes and some additional effects added here and there, and some different takes of instrumental tracks. In general though, the differences are the kind only diehards will notice. This CD sounds three-dimensional even on the cheapest of sound systems.  Dave Mustaine, this is your Sgt. Peppers!

I won’t even bother discussing the tunes. You know them all anyway.  “Symphony of Destuction”, “Sweating Bullets”, “Foreclosure of a Dream”…they are all excellent examples of technically sharp and aggressive heavy metal.   For bonus tracks, you get one hard-to-find B-sides and some interesting demos, but not the coveted rare Trent Reznor remix. 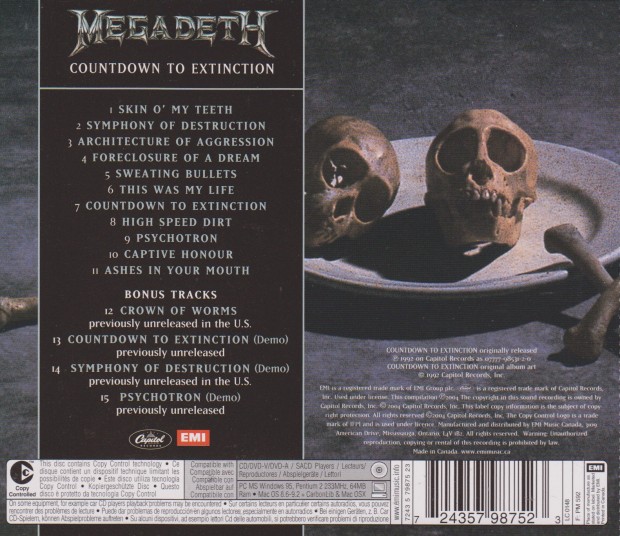 Welcome back to the WEEK OF SINGLES 2! Each day this week we’re look at rare singles. 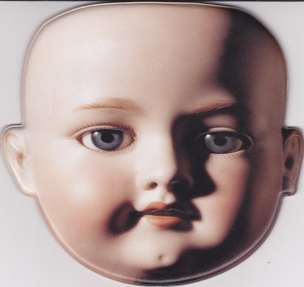 Here’s a real treasure that I acquired via T-Rev’s store for about $4.  Lately this thing’s been going on Discogs for $36, which must be solely for the packaging.  All the tracks have been available on various Megadeth collections for a long time now, although “Crown Of Worms” was originally a rare track.  It’s a co-write between Dave Mustaine and Sean Harris from Diamond Head.    It kicks some serious ass, but it’s no longer a song that’s worth $36.  I think what makes this single command high prices is the bizarre baby head slip case.  That and the fact that it was a promotional CD, meaning it was never intended for sale and only small numbers were made.

A while back I made a video explaining what a promo CD was, which featured the “Creepy Baby Head”.  You can check out that video below.   The head obviously ties into the Youthanasia album artwork but otherwise there’s nothing else externally to tie it to the band.  No logo, no tracklist, just the serial number DPRO-79448.

As mentioned, “Crown of Worms” kicks some serious ass.  I was a big fan of the Mustaine/Ellefson/Friedman/Menza lineup of Megadeth, and this song was not only album worthy but single worthy.  Nick Menza sounds great on it, and the song just smokes from start to finish.  Killer riff, too.  Mustaine’s at his snarly best.

The other two tracks are both Youthanasia album songs:  “Black Curtains” and the single “Train of Consequence”.  “Black Curtains” is a lot more doomy, kind of like “Harvester of Sorrow” (perhaps).  “Train of Consequence” seemed to alienate some fans back in ’94, but I think it’s a strong single if a bit more melodic then some would have liked.  It still has a cool stuttery riff and a vintage Dave vocal.  It’s rhythmically interesting and I think the guitar solo is ace.

There is no way I would pay $36 for this thing, and I’d advise you to keep searching the used CD shops. Promos were funny things. Record store and radio stations would be sent these things, and a lot of the time nobody gave a damn. They would end up in the hands of a non-fan and sold at a pawn shop or another CD store. While today some fans will pay a lot of money for this, you know that copies will end up in used CD stores without a $36 price tag.  You just have to do the legwork and find it. 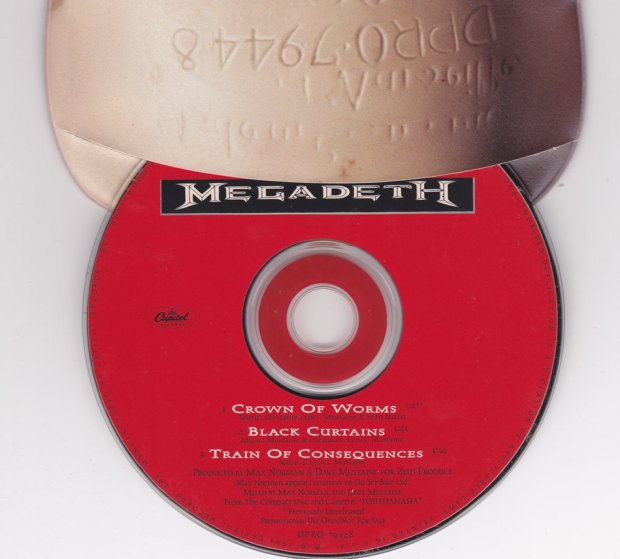