Let’s pretend that you’re involved with Ozzy Osbourne’s management or record label.  When it comes time to release that first “definitive” box set, I’m sure you’d have your own ideas for making it the best box that Ozzy could release.  Ozzy Osbourne in 2005 had eight mostly great studio albums, numerous live records, and more rarities than you could shake a stick at.  They certainly had a lot of music to choose from.  I greeted the eventual release of Prince of Darkness with great excitement at these rarities…but tremendous disappointment at the overall listening experience.

A 4-CD box set is a lot of listening and in order to keep it riveting from end to end, you have to pick the right tracks and sequence them for maximum firepower.  Somebody at Sony’s box set department didn’t get my memos on that, obviously, because Prince of Darkness is one of the most annoying box sets to listen to in its entirety.   They decided to do two discs “anthology” style, with live and rare tracks mixed in.  The third disc is a questionable collection of Ozzy collaborations.  The final CD is the worst of all:  covers that Ozzy recorded and later released on their own album, Under Cover!  A CD that was released only months after Prince of Darkness itself — with additional bonus tracks to milk it further, forcing the completist to buy it again! 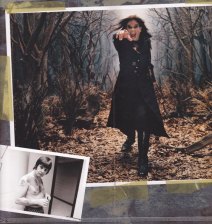 I have so many complaints about this set that I felt it best to list them all off in point form.

1. Never, ever start your box set off with a live track.  Even if that live track is “I Don’t Know” from Randy Rhoads Tribute.

2. Because this set was released in 2005, you are hearing the re-recorded bass and drums on all the songs from Blizzard and Diary…not the classic original versions.

3. Same with the tunes from Bark at the Moon.  These are the remixed versions found on the 2002 reissue of that album.  There are only two songs from that album anyway.  “Bark” itself is an unreleased live version.

4. Two CDs is not enough space to represent Ozzy’s album output in a box set, especially when you include the studio albums, live albums and rare tracks too.  The early Randy Rhoads material makes up the bulk of disc one, leaving the Jake E. Lee years under represented.  There are no songs from The Ultimate Sin at all, only the three live tracks originally for the Ultimate Live Ozzy EP.

5.  There are a few baffling exclusions, such as “Miracle Man” (first single with Zakk) and “I Just Want You”, in favour of also-rans such as “Spiders”.

6. The collaborations disc is a total mess.  “Purple Haze” is just a Hendrix cover from the No Rest For the Wicked era, by Ozzy’s band.  It’s not a collaboration, just a cover they did for the Make A Difference Foundation CD called Stairway To Heaven/Highway To Hell.  It’s a real challenge to listen to this whole CD in one sitting.  One moment you’re rocking out to a killer version of “N.I.B.” with Primus, the next you’re barfing through a piece of crap with Tony Iommi and Wu-Tang Clan.  From Was Not Was to Miss Piggy, at least the CD is diverse, and it does collect a lot of Ozzy’s singing from albums I don’t have.  I already had the Miss Piggy track but not the cover of “Stayin’ Alive” by Dweezil Zappa! Nor did I have “I Ain’t No Nice Guy” by Motörhead, from the mediocre March ör Die.  This disc is too jokey and not at all consistent.

7. Even though the third disc collects a variety of tracks from a number of CDs, I am certain that Ozzy fans who buy this kind of box set already had some of them.  Including “Psycho Man” by Black Sabbath (not even a single remix version) from the Reunion CD (2008) is odd.  Many Ozzy and Sabbath collectors already have the Nativity in Black CDs, where the Primus and Therapy? tracks come from.

8. “Nowhere to Run (Vapor Trail)” by DMX, Ozzy Osbourne, Ol’ Dirty Bastard, The Crystal Method and Fuzzbubble is edited!  This track was from the South Park album and still features Isaac Hayes’ introduction, as “Chef”.  For reasons I cannot explain at all, the swearing and “n” words are blanked, and there were a lot of them.   It’s also missing ODB’s rant at the end, which itself was edited off later versions of the South Park CD.  (I have an earlier version with the rant intact.)

9. The packaging leaves a hell of a lot to be desired.  Inside the box which is just book-style, you will find a nice big booklet that just sits loose inside.  There is no way to secure it in, so it’ll fall out any time you pick it up!

10. Speaking of that booklet, the liner notes suck.  Ozzy has a brief note about each song, but not necessarily any useful information.  For example, regarding that South Park track, all we’re told is that Ozzy bit the head off Kenny.  Nothing about how that random assortment of artists was assembled.  The book is padded out with lyrics and shoddy credits that aren’t very accurate.  “Bark at the Moon” live for example was recorded in 1982-1983 according to the notes.  Come on, guys!  Not good enough for a box set.

11.  The entire fouth CD sucks.  You can read my review of the expanded Under Cover version of it here.  (Long story short: 1/5 stars.)  The only difference is that the box set includes Kelly Osbourne’s duet with daddy, on “Changes”.  This song was only included on the Japanese version of Under Cover but not the regular domestic.

Fortunately, Prince of Darkness is not a total bust.  Some of the unreleased tracks are real treasures, such as the demo of “S.I.N.” called “Won’t Be Coming Home”.  I prefer this to the album version from No More Tears by a long shot, as I do the twangier “I Don’t Want to Change the World”.  I also love the demo for the emotional ballad “See You On the Other Side”, which features previously unheard saxophone accompaniment.  I appreciated that they included the live version of “Perry Mason” from the Ozzfest 1 CD, which enabled me to sell off that pretty crappy album.

It’s easy to bitch and complain (don’t I know it?) but if I were to make a 4 CD Ozzy box from the same period, I would have done it very differently.  The covers CD would be axed completely and the rarities set aside to a disc all their own.  The first two “anthology” discs would be strictly studio versions, and original studio versions at that, with only a sprinkle of tracks from Randy Rhoads Tribute.  I would try to squeeze in more rare tracks from B-sides and EPs, and I would definitely try to mix them in with the collaborations so that you’re not left listening to so many of those novelty tunes in a row.

Buyer beware — Prince of Darkness is not the feast you were hoping for. This is a poorly executed package. When you have an artist like Ozzy Osbourne, you really gotta screw up bad to put out a set that is this hard to listen to. Prince of Darkness is going back on the shelf, for a good long while.

Welcome to the third WEEK OF SINGLES!  Once again, we’ll be looking at singles and EPs all week.  Up first is a really odd one. 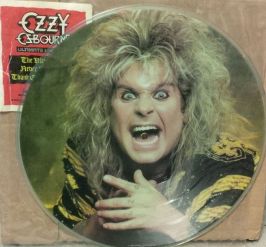 T-Rev bought this for me a year or two ago, God knows where he found it!  All I know is that one day I got a text from him saying, “Mikey, Ultimate Live Ozzy picture disc, do you need it?”  I obviously said yes,  I didn’t care what it was exactly.  I figured it was probably live cuts from The Ultimate Ozzy home video release.  I know that Ozzy picture discs go for crazy amounts of money at record shows, and this one was affordably priced.

Picture discs don’t sound the best, and this one even has a label on the front warning the consumer of this fact.  Unfortunately my plastic sleeve isn’t in the greatest shape, although the record is absolutely perfect.  I love the way the turntable spindle sticks out of Ozzy’s tongue on one side.  The other side has a picture of Ozzy and guitarist Jake E. Lee with the girl from The Ultimate Sin album cover.  Jake’s taking a bite out of her bum.

Here’s the weird thing.  Even though the label clearly states these are live versions from Kansas City in 1986 (the Ultimate Ozzy video shoot), there are no live songs.  There are three tracks per side, and both sides are identical.  They contain the studio versions of “The Ultimate Sin”, “Never Know Why”, and “Thank God for the Bomb”.  The studio versions — not live versions!  Somebody screwed up somewhere; you have to assume one side was meant to have the live tracks, and the other the studio counterparts.  Information is scarce, except that there are multiple reports of the same issue for this picture disc on the web.

Thankfully, the three missing live tracks are on the Prince of Darkness box set.   It’s always nice to get some live Ozzy stuff with Jake E. Lee, since it’s so rare to find.  Randy Castillo (R.I.P.) is on drums, and like him or not, he has a signature style that he utilized with Ozzy.  I enjoy his drumming.  The live versions are more keyboard heavy than the studio counterparts.  I enjoy Jake’s echoey guitar intro to “Thank God for the Bomb” which sounds cool live.

I’d love to know if these three live tracks were actually released on vinyl at all in 1986.  Prince of Darkness was released in 2005; that’s a long time to wait to finally get the tracks in an audio format!  I do have the Ultimate Ozzy video on VHS, but it has never been released on an official DVD.  Knowing of Ozzy’s loathing for this period, I wonder if it ever will be.  I doubt it.  It’s too bad, because some have a fondness for The Ultimate Sin and its songs.

If this picture disc had contained the live tracks it was supposed to, I’d give it 4/5 stars.  However, for a screwup this colossal:

Final note:  When originally released, this disc came with postcards and a poster.  I have neither.