July 1990: A M.E.A.T. Magazine interview (issue #14) with Ronnie James Dio states that he was unhappy with Dream Evil, one of my favourite Dio albums. He felt the songwriting was unfinished, that the songs needed tightening up. Supposedly some of the changes he made were a response to that. If that’s indeed the case, then Lock of the Wolves came as a total shock. These songs feel even less finished than any Dio album before.

Dio had completely revamped his band. Craig Goldy (guitar) was the first one to leave. Apparently Vinnie Appice, Jimmy Bain and Claude Schnell didn’t care for Goldie, but they all ended up departing too. Ronnie was no longer happy with the writing process nor the dischord that had set into the making of Dream Evil.  Because of these circumstances he was able to revamp the entire Dio lineup but not by choice. 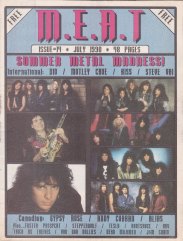 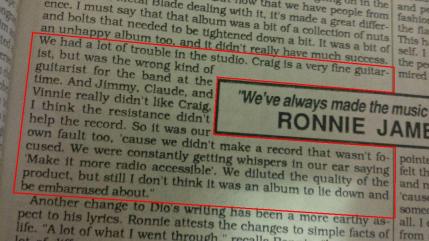 Ronnie took on a young and international crew: Swedish Jens Johansson on keyboards (ex-Yngwie Malmsteen), new York kid Teddy Cook on bass, ex-AC/DC skin-pounder Simon Wright, and the young 17 year old Scot, Rowan Robertson as his new guitar wizard. Robertson won the role after a cattle-call resulted in 5000 tapes sent to Dio for his consideration.  The end combination was a band of skilled players, but lacking in road-tested chemistry. Plus the pressure was certainly on Robertson, having guitarists like Vivian Campbell and Richie Blackmore writing the solos you were going to be playing.

About half the album was written when Bain and Appice were still in the band, and they appear on several writing credits. Robertson has a co-write on every song, and Jens Johansson has two, while new bassist Cook has one. Regardless of the numerous writers, the album is very singular in its direction. That is to say Lock Up the Wolves is a painfully sloooowww Dio album.

I was very disappointed that there are only a couple fast rockers to keep the blood pumping. The first track, “Wild One”, fools you into thinking this album will be a rocking good time full of tasty guitar hooks and wicked Dio lyrics. However, “Born On The Sun”, while boasting a great chorus melody, sags and droops. “Hey Angel” and “Between Two Hearts” are more of the same. I kept waiting for another fast song, or just something different to keep me awake. I had realized that Lock Up the Wolves is loaded with boring pseudo-bluesy riffs, slow to the point of coma-inducing.

The only slow tunes that really have spark of any kind are the monstrous title track (over 8 minutes of drama) and the ballady “My Eyes”. “My Eyes” is my personal favourite track on the album, and perhaps worth the price of purchase if you can find the album cheap. It’s also fun to play the game “How many of Dio’s other song titles are in the lyrics?” with this one.  The CD-only bonus track “Why Are They Watching Me” is the only other serious fast rocker on the album, and I have no idea why it was the CD-only bonus track, because the album desperately needed a kick in the pants.

And that is Lock Up the Wolves in a nutshell. Approximately 50 minutes of slow, pseudo-bluesy guitar and dull rhythms. About 10 minutes of heavy metal. That’s it.

I do love the cover art.