In the early 2000’s, somebody thought it would be a good idea to spend money on some company cars.  Now, I’m no accountant.  I’m no expert on finances.  But I would have thought it would make more sense to pay mileage cheques on time than to buy a mini-fleet of cars!

They were Azteks.  They were painted in our store colours and had G-I-A-N-T store logos plastered all over them.  It was like driving a giant logo board.  They were hideous.  I only rode in one, once.  They tried to get me to lease one though.

“Hey Mike.  How would you like to drive one of these babies?”

Wha?  Why would I want to when I had my own car that I bought, that wasn’t a big ugly moving billboard?  Let me tell you something people.  They weren’t just ugly, they were fugly!

I guess the idea here was advertizing;  mobile advertizing.  I’m not too sure if that worked.  I don’t know how many people driving down the street would see a car like that and go, “Quick honey, write down that phone number — I need some CDs!” 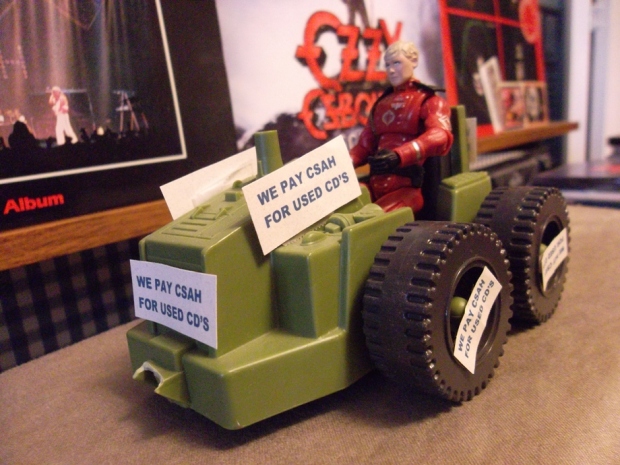 Coincidentally, GM slashed the price of the Aztek right around the time we got ours…

I think two or three people drove the Azteks.  I heard they weren’t that great.  I think we even got a phone call complaining about somebody’s driving.  Like, “Hey, that idiot in the CD Car cut me off!  I’m phoning their boss.”  I’d hate to own one of those and somebody see it in my driveway.  “Hey, that’s the guy who only gave me $1 for my Mellencamp!  Let’s go egg his house!”

So, I happily drove my own car instead of one of those ugly Suckmobiles.  They were phased out a couple years later.  The great experiment had presumably failed, because the Azteks were no more.  Never to be seen again.  Thank God.