Part 21 of my series of Iron Maiden reviews! 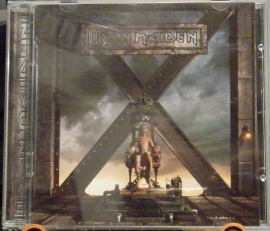 A lot of fans confidently proclaimed that you can’t replace Bruce Dicksinson.  To some degree, they were right, but Iron Maiden refused to pack it in.  Steve Harris was going through dark times, particularly a painful divorce.  It was Dave Murray who fired up the demoralized band:  “Why should we pack it in just because he quit?”

They began the audition process, eventually calling Wolfsbane vocalist Blaze Bayley.  Wolfsbane were once the new proteges of none other than Rick Rubin, who signed the band to Def American and produced their first album.  Regardless of Rubin’s involvement, Wolfsbane made little impact.

Bayley turned up at the audition and they played roughly seven numbers including “Hallowed” and “The Trooper”.  The personalities meshed and after listening back to the tapes, it was Nicko who declared, “There, now that sounds like Iron Maiden, dunnit?”

With the resulting album, The X Factor, as the only evidence before us, one might wonder just what Nicko was hearing.  I remember being quite surprised when I listened for the first time:  “This guy doesn’t have any range!”  His voice fit in better with the darker tone of the 1990’s than Bruce’s did, but would it work?

As an album – disregarding the live shows, stage presence, or what happens later – I think The X Factor is damn fine.   Perhaps it’s not a fine Iron Maiden album, although Steve ranks it among his top three.  It’s decidedly darker, softer & slower and sparse, but it is also deeply personal.  Characters on all songs are tortured souls, reflecting Steve’s inner torment.

Also important to note:  This is the first Iron Maiden album since the first one, not to be produced by Martin Birch.  Now, Steve Harris and Nigel Green were producing at Steve’s home studio.

The band made no bones about the new direction, starting off with the 11 minute epic “Sign of the Cross”.  A new sound, Gregorian chanting, begins this tale based on The Name of the Rose, specifically the torture part!  Blaze ominously warns that “Eleven saintly shrouded men have come to wash my sins away.”  The song was written solely by Steve Harris and it follows in the mold set by Fear of the Dark:  long, soft, bass-driven sections backed by soft keyboard beds.

It suddenly lurches into a slow march around the 2:45 mark, sounding much like Iron Maiden, but slowed down, more precise, and with a lower, rougher voice spitting out the words.  It is similar to past epics in that it goes through different sections and dynamics.  Although a soft epic, it is one of the best songs of the Blaze era.  Indeed, the band continued to perform it even on the Brave New World tour.

As if to allay your fears that Maiden has gone soft, “Lord of the Flies” is next, retelling the old story of the boys stranded on the jungle island .  It stutters forward at first before breaking into a solid groove.  This Harris/Gers winner was chosen as the second single.  Once again, Maiden continued to perform it even into the Dance of Death tour.  Blaze growls his way through the words, his solid baritone carrying the catchy verses and choruses.  Davey’s familiar guitar stylings in the solo are vintage Iron Maiden.

The third song on the album to be based on a book or movie is next, the manic “Man on the Edge”.   Blaze’s first writing credit with Steve, it’s based on the excellent (and my personal favourite) Michael Douglas film, Falling Down.  Lyrically though…this one is pretty poor:

A briefcase, a lunch and a man on the edge
Each step gets closer to losing his head
Is someone in heaven are they looking down
‘Cause nothing is fair just you look around

Really guys?  “The car is an oven and baking is wild”?  What does that even mean?

Even though the band continued to play this one into the Ed Hunter tour, it’s not really a standout Maiden track to me.  While it serves as a fast manic number to bang your head to while singing along, it’s simply not that great a song.

Maiden wisely sequenced these three songs first, three songs that wouldn’t alienate fans or critics even with the change at the microphone.  It is only now that The X Factor begins to show its true dark face.

“Fortunes of War” is a slow, mournful ballad, a beautiful song, perhaps the sequel to “Afraid to Shoot Strangers” lyrically and musically.  There’s Steve’s bass, backing the soft sections with faint keyboards.  As if you couldn’t tell by the bass being one of the lead melodic instruments, this one was solely written by Steve.  I like this song.  Reading between the lines you can hear Steve’s pain, and you can definitely hear it musically, before the song kicks into a triumphant upbeat section with guitar harmonies at 4:35.

“Look For the Truth” is next, beginning ballad-like before going into a mid-tempo stomp.  This song featured the new writing triumvirate of Steve, Blaze and Janick.  Lyrically, it would be seem to be inspired by Steve’s personal struggles.  Musically, I think this is another strong number, and it has a great Davey solo.  If there is one thing that always grounds Iron Maiden to its roots on The X Factor, it is Davey’s solos.

This concluded the first side.  Side two begins  with another slow one, “The Aftermath”, written by the same triumvirate.  It is at this point that I began to tire of the slow pace.  Lyrically I don’t think this one stands up to anything on side one.  Another war song, it doesn’t really bring anything new to the table.  It was dropped from the live set after this tour.

Although it’s still the bass carrying the melody, “Judgement of Heaven” quickens the pace.   “I’ve been depressed so long, it’s hard to remember when I was happy,” sings Blaze on this obviously Steve-written piece.  Yet it’s a positive message, Steve trying to stay strong and look to the future.  Once it gets going, it’s a pretty good song, with the chorus being particularly catchy.  Blaze’s “yeah yeah’s!” are as close as we get to hearing Blaze trying to do anything in an upper range!

The worst song is up next, “Blood on the World’s Hands”.  A really dull Steve bass melody (guess who wrote this song!) takes a full 1:12 to introduce the damn song!  There’s nothing here that really makes the song memorable.

Although it starts very slow (again) with bass melodies carrying it (again), “The Edge of Darkness” is a much better song.  It follows the plot and quotes dialogue from Apocalypse Now:  “What I wanted a mission, and for my sins they gave me one.”  Musically, Nicko pounds this one into submission.  It stomps forward like a powerful beast, unstoppable, albeit slow and plodding.  But fear not, it picks up again at 2:55, going into a faster guitar-harmony based section.  Although the album certainly does not need more slower songs at this point, “The Edge of Darkness” is a win.

Less successful is the introspective “2 a.m.”.  It’s not dreadful, but it’s pretty pedestrian for Maiden, although I’m sure it was deeply personal to Steve.  It’s yet another slow song that goes into a powerful stomp, but that’s too many now.

The quirky “The Unbeliever” ends the album on a better note.  It has a neat slippery little riff, and it’s rhythmically very different. Written by Harris/Gers, it’s marked with a standout Janick solo.  Even though it’s fast paced, there’s no denying that “The Unbeliever” lacks the crunch and volume of Maiden songs of yore.

And that perhaps is one of the most surprising things about The X Factor.  Regardless of the change in direction, singer and artwork, it is the production that shocked me.  Clean, free of dirt and distortion, Iron Maiden had never sounded this clear on record.  But is that a good thing?  I desperately wanted a little more grit and grime in the guitars, not to mention volume.  The production is otherwise excellent.  The drums are like Bonham on steroids and the bass (of course) chimes perfectly on every cut.  I just wish there was more guitar.  It’s Iron Maiden, and I felt like I didn’t get enough guitar.

This being a new era for Iron Maiden, the band chose Hugh Syme (he of many Rush and Megadeth covers not to mention dozens more) for the new Eddie.  Going for a realistic look, the Eddie lobotomy cover was deemed too scary for some markets, and we received the less graphic electric chair cover facing front.

Now, onto the singles.

The first single, “Man on the Edge” had numerous B-sides.

“Judgement Day”:  Manic and fast like “Man on the Edge”, relentless although not tremendously catchy.  (Available on US CD single, or UK CD single part 2.)

“I Live Way Way”:  Starts slow and chime-y like many of the album songs. Yet it launches up to speed after this intro.  Another fast B-side, I’m now wondering why Maiden chose to stack the album so heavy with slow songs and pseudo-ballads when they had all this stuff waiting in the wings?  Perhaps replacing two album songs with two of these could have changed the balance so much.   (Available only on 12″ single or Japanese 2 CD version of The X Factor.  The 12″ single comes with a massive poster.)

Parts 1 and 2 of the UK CD single also had a two part Blaze Bayley interview.   Essential only to the fan.

It also came with a box designed to house the album and future singles.  But even when I include my redundant US “Man On The Edge” CD in the box, there’s still room to spare.  This indicates to me that there were more singles planned but cancelled.

The second single, “Lord of the Flies” had two awesome B-sides!  Covers.  Covers of “My Generation” (The Who) and “Doctor Doctor” (UFO)!  And let me tell you, Maiden is one of a few bands that can do “My Generation” properly.  Steve ably handles the backing vocals while Blaze spits his way through the lead.  This sounds very live off the floor and perhaps it was.  “Doctor Doctor” is one that I actually prefer to the UFO original.  Blaze nails the vocal, the band are solidly in the groove, and Nicko nails it home.  Surely, this must be considered one of the best Maiden covers of all time!

As always, context is very important.  When The X Factor came out, I was working at the store, and I had been waiting three long years to hear it.   It was the mid-90’s, and most bands chose to get “darker” or “more serious” or “modernize” in order to stay relevant.  It was true from Bon Jovi to Metallica with varying degrees of success.

For me, The X Factor was one of the few things that had come out worth listening to that fall, and I listened to it non-stop.  It was largely the novelty, and partly the lack of other new options, but I grew to really like most of The X Factor.  It took three listens, I do remember that much.  But in the 1990’s, all things considered, it really wasn’t that bad. 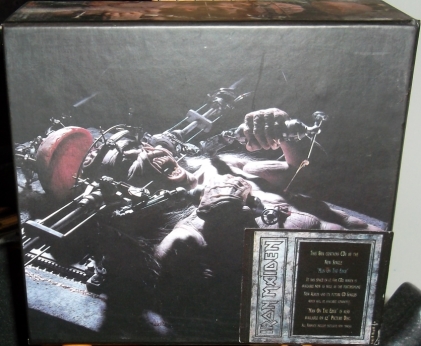 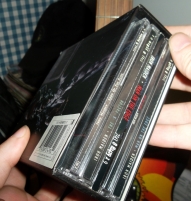 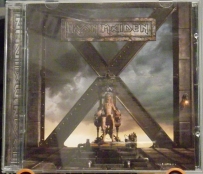 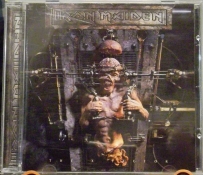 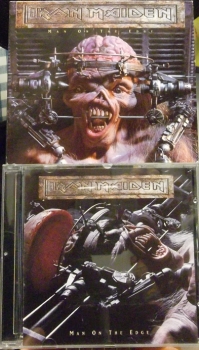 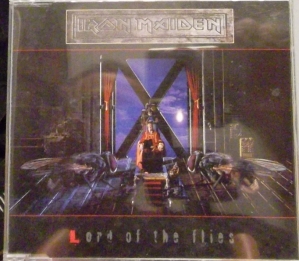 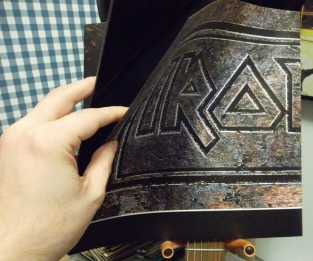 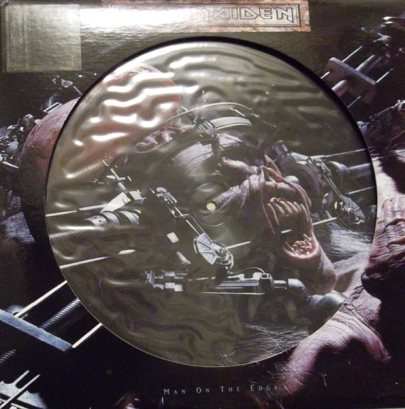 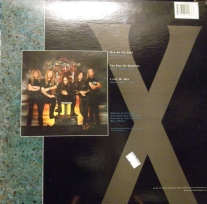 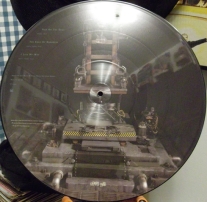 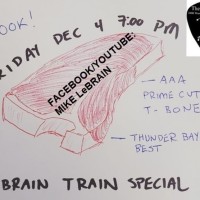 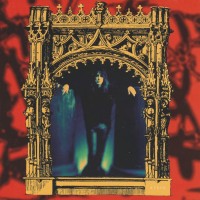 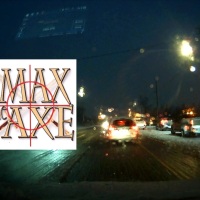 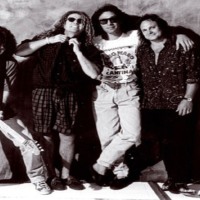