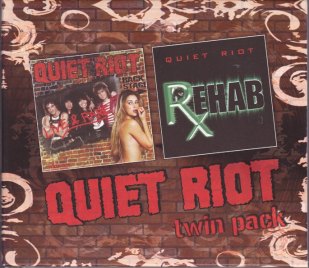 I will tell you right off the bat, the only reason to own Live & Rare by Quiet Riot is if you are like me (obsessive collector), and must own everything. That’s it. There are no other reasons. This is a terrible, terrible CD. Awful. It is so cheaply and carelessly put together that it truly is the definition of “cash grab”.

The original pressing of this CD had a major flaw, a 2 second gap between the songs.  This amateur mistake caused the audience noise to cut out and then start again in a way that was just jarring and unpleasant. They partially fixed the problem on my second printing…but only partially. The 2 second gap is gone, but it is replaced by a quick split-second pause — think about the way a live album sounds when you play it on an mp3 player. It’s not nearly as bad as the 2 second gaps, and it makes the album so much more listenable.   At the end, the live portion doesn’t even finish with a fade-out.  Just an amateur abrupt silence.  Lastly, the three demo tracks at the end aren’t even listed in the correct order on the CD sleeve.  I have a hard time imagining how these flaws made it past quality control — twice!!

I can remove the gaps using Audacity, and re-burn the thing using Nero, but really what’s the point?  If the album was decent, it might be worth the effort.  Unfortunately, Live & Rare is pretty poor.  You wouldn’t expect this to be the case upon reading the track list.  Live performances from the 1983 Metal Health and 1984 Condition Critical tours, the golden years with the classic lineup.  Throw on three bonus tracks from the 1981 DuBrow demo and it should be a pretty satisfying listen, gaps or no gaps.

Musically the songs are fine, but the recordings are terrible! Basically this sounds like a bootleg, and I have heard far better bootlegs.  I’ve heard audience bootlegs that were better quality than Live & Rare.  It’s nice that there are some rarely played tracks on here (“Gonna Have a Riot” and “Danger Zone”) plus a drum solo, but otherwise the CD is close to unlistenable. What’s the point of a drum solo if it sounds this terrible?  The only, and I mean only, saving grace on this CD are the three unreleased DuBrow demos. They date from a time when Quiet Riot was actually broken up, and Kevin was  recording under the name DuBrow. Banali was a part of the DuBrow lineup. They were eventually renamed Quiet Riot and they recorded Metal Health and made metal history. These demo tracks are historically significant to fans, and it’s nice to finally have them.

Buyer beware. I was not at all impressed with this CD, and I think Quiet Riot should have been embarrassed to release it. The liner notes state that it was “produced and mixed by Neil Citron and Frankie Banali”. I wonder exactly what they did to produce and mix it. I speculate that they adjusted some levels on a home PC and burned a copy to CD…without removing the 2 second gaps! Not very pro at all. 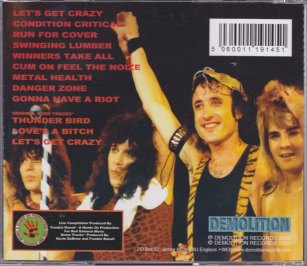