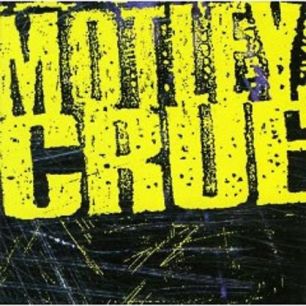 It is hard to forget that day in the winter of ’92 when I heard Vince Neil had been fired from Motley Crue. Or quit. Whatever. It was disbelief! I was so into their previous albums, Dr. Feelgood and Decade of Decadence with its crushing single, “Primal Scream”. The Crue were at the top of their game! How could this happen?

But it did happen, and when the spring of ’94 finally rolled around, I picked up Motley Crue (self titled, no umlauts).  I picked it up at the store that, in only a couple more months, I would be working in myself.  I realized after only two listens that Motley Crue had gone from strength to strength. They had produced what was and still is their heaviest album, the most uncompromised, groovingest (is that a word?), serious piece of metal they’d ever done. Sabbath-esque at times, this was one heavy album. John Corabi was in on vocals and (for the first time in this band) rhythm guitar.  John added new dimensions to a band that now demanded to be taken seriously.

The problem was, no one did. While I was working at a record store in ’94, I had a lonely stack of Motley Crue discs (sitting right next to a stack of David Lee Roth’s Your Filthy Little Mouth), going unpurchased. If this album had come out in ’94 by anyone else — Stone Temple Pilots, Soundgarden — it would have been a #1 smash hit and spawned at least 4 hit singles. It didn’t.

Originally just 12 tracks and now expanded to 15, the Motley Crue CD was heralded in by the grooving riff that was “Power To The Music”. A simple song accented by some of the best drum fills ever on a Motley disc (expertly captured by Bob Rock), “Power To The Music” was a rallying cry, something that the fans could relate to. Especially when Corabi shouts, “Don’t tell me to turn it down!” Lyrically this was not all that different from the old Crue. Musically, it followed the path set out by “Primal Scream”. Sound wise, this was a new different Crue, downtuned, with a gritty vocalist with power to spare, more guitars, clearer and louder drums, and sound effects.  Just more of everything.

Some backwards guitar introduced “Uncle Jack”, a song about a child molester, with a distorted Corabi screaming, “I wanna rip your god-damn heart out!” This, friends, was the new Crue for a darker and more serious time. Corabi’s gritty, bluesy vocal melodies were anchored by Sixx, Mars and Lee, grooving as they had never done on record before (with additions from Bob Rock). The new Crue was on fire after only two tracks!

The single, “Hooligan’s Holiday” was next. At 5:51, this was an odd choice for a single. It boasted a strong chorus, some unusual (for Crue) guitar drones, and some more amazing sounding drum fills. Rock really outdid himself on the sound of this record.  I think it’s the best sounding record that either the Crue or Bob Rock have made.

“Misunderstood” was the first epic piece and the second single. At nearly 7 minutes, it was again hardly a commercial song. It was the first song the band wrote together for the album.  It reflected a lot of Zeppelin influences.  It starts acoustic and somber, about a “little old man, left alone in desperate times, life’s passed him by.” Then it slows down, there’s some backwards parts, and the heavy riff kicks in. An orchestra backs Motley Crue, and the amazing Glenn Hughes joins Corabi on vocals.  Perfection.

From there the Zeppelin influences continue. “Loveshine” could have been on Zeppelin III. I’m not sure how many different acoustic instruments are present, but there are a lot, layered here and there.  There are also some odd percussion instruments that I have trouble picking out. This could have been another single, in a perfect world. One of the best songs on the record, “Loveshine” defied expectations by slowing the pace.  I didn’t expect there to be any ballads at all.

The pace picked up again with “Poison Apples”, which begins with a tinny transistor radio sound before kicking into gear. The only glam rock song on the album (the chorus contains the line, “We love our Mott The Hoople”), “Poison Apples” is really the only possible mis-step on a great record. It simply sounds too much like the Motley Crue of old, which to me confused the direction of the album. I would like to hear Vince Neil tackle this one someday (when hell freezes over).

Side two of the record began with “Hammered”, one of the earliest pieces of music written. I believe the riff and groove go back to when Vince Neil was still in the band. “Hammered” is one of the most Sabbathy moments on the album. I used to play the outro riff on my guitar all the time.  I loved that riff. This is a truly great song.

Another epic followed, this one “Til Death Do Us Part”. An ironic title considering that this was to be the only album with Corabi, it was also once the title track. Very Sabbathy once again, “Til Death Do Us Part” contains a slow droning riff, some clear and crisp cymbal work by Tommy, and some of the heaviest kick drums I’ve ever heard. A classic in any parallel universe.

My two favourite songs followed. “Welcome To The Numb” brings back more Zeppelin influences (think a souped up “Travelling Riverside Blues”), with Mars’ virtuoso slide guitar. The groove here is unbeatable and the guitar work ranks with Mars’ all-time best. Coulda woulda shoulda been a single.  I recall Nikki Sixx saying that this song barely made the album, as it had too much of the “old Motley vibe”.  I disagree; I think it was modern and cool.

“Smoke The Sky” is the “drug song”.  “We love our THC, when it’s time we smoke the sky!”.  It borders on thrash metal. Fast, riffy and heavy, this was single #3. The pace is incredible and the song will put you into a sweat.  Corabi makes absolutely no bones about the subject matter:

Socrates inhaled it too,

“Droppin’ Like Flies” brings back the Sabbathy grooves. Another slower riffy monster, it too is not brief at 6:26 with a long guitar oriented outro. It is followed by the final track on the original CD, “Driftaway”, which is another ballad. I think it took a lot of guts to end a CD this heavy with a ballad. This song too, perhaps, could have been performed by the original band. After banging your head for nearly an hour, this track acts as a comedown of sorts.  It’s my least favourite song, but it’s not a bad ballad.

The bonus tracks on the reissue include the first B-side, “Hypnotized”. This sounds like a demo to me. It is very heavy, very Sabbathy, and very raw. It has a long, drawn out droning outro. “Babykills” has a funky groove and clavinet. This has a bit of a glam metal sound, and was originally released on the mail-away EP Quaternary (which also contained 4 solo tracks, one from each band member). I am glad it has been returned to its rightful place on the Motley Crue album. Finally the CD ends with “Livin’ In The Know”, from the Japanese version of Quaternary. Not an outstanding track, it is clear that Motley Crue included the best material on the album itself. All killer, no filler — and “Livin’ In The Know” is admittedly filler.

It is very unfortunate that this album did not sell, and the fans couldn’t accept a Crue without Vince. In hindsight, it is great we got Vince back to (eventually) make the decent Saints Of Los Angeles CD. However, with Vince Neil solo at the time with his great Exposed album, and the Crue delivering this masterpiece, I was content for them to stay apart. While grunge had certainly taken over, Motley Crue did sabotage their own chances with some terrible interviews including one on MTV where they expressed indifference to their former lead singer being injured in a surfing accident.  They later walked out on the interviewer, and MTV played that clip ad nauseum. Stunts like these, and having swastikas on stage, tanked any chances this album ever had.

Once again I must give special mention to producer Bob Rock, who also played some additional bass and guitar on this CD. He managed to produce a heavy package without overproducing. There is heaviness, there is amp hiss, and yet the clearest crispest drums I’ve ever heard. He captured the downtuned guitars without making them muddy.

Pick up Motley Crue, turn off the lights, and get ready to rock to the heaviest and best album this band has ever made. It is a true classic in any just universe.

I even bought it twice, to get both booklets!  (And then again, in the Music to Crash Your Car to: Vol. 2 box set.) 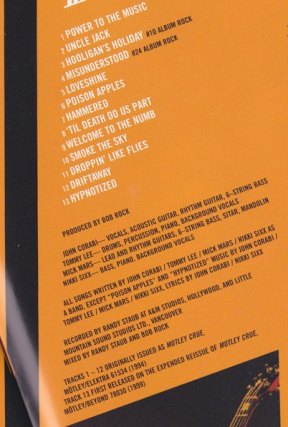