Back in May/June, we took a detailed look at the entire Aerosmith Box of Fire set (1994), including the original Aerosmith’s Greatest Hits (1980).  What we didn’t inspect was the expanded 1997 reissue of Greatest Hits, now dubbed Greatest Hits 1973-1988, including an unreleased track.

Since this CD is based on the original Aerosmith’s Greatest Hits, it contains all the original songs. Because of the greatly expanded tracklist (from 10 to now 17 tracks), it is the preferred listening experience. The title is misleading: If it truly was the greatest hits from ’73 – ’88, wouldn’t “Angel” be included? “Dude”? “Rag Doll”? Yes, but this is the Columbia Records music, not the Geffen stuff. Casual fans don’t know that. Casual fans might see the title and say, “Oh cool…this will have some of the 80’s music on there.” No, it doesn’t.

“Chip Away The Stone” was released on CD for the first time on 1988’s Gems album, and there are a lot of fans out there who would name this as a favourite.  Putting it on the expanded Greatest Hits is what we in the reviewing world might call a “no-brainer”.  It elevates the album to a whole new level.

“Seasons of Wither” is a beautiful one from the early days, an acoustic number just a little different than your typical “ballad”. Fantastic song. “Big Ten-Inch Record” is loaded with horns and soul and sounds like classic Aerosmith. Be glad these tunes were added, among others. They’re all still great today, and not overplayed on radio or in concert. Of course you still get the songs you know, such as “Dream On”, “Same Old Song and Dance”, “Sweet Emotion”, and all that good stuff.

One unreleased song is present: A live version of “One Way Street”. This is actually a more recent recording from 1994 (so what’s this 1973-1988 nonsense?), and was also on a Walmart exclusive EP called Made in America in 1997.  “One Way Street” is a debut album classic, and oh so very welcome here.  It was recorded for radio broadcast, and the setting sounds intimate.  Steve’s harmonica work is the high point of this great little-known song.

I used to advise fans to pick this up instead of the old, cheaper Greatest Hits.  Today you can find it for under $5 if you know where to look.   The price has dropped considerably since I paid almost $28 for it on US import! 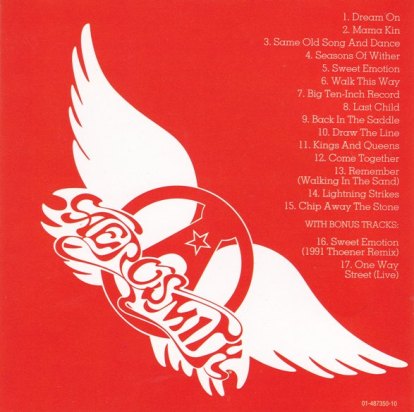 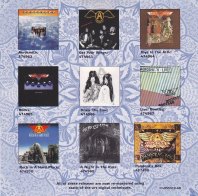