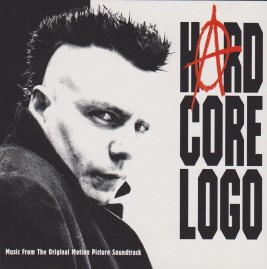 Hard Core Logo are one of the greatest fictional bands of all time.  Right up there with Spinal Tap, Strange Fruit and Wyld Stallions, Hard Core Logo are legendary.  Fronted by Joe Dick (Hugh Dillon of the Headstones), Hard Core Logo are so fucking good that you only wish they were real.  This soundtrack CD is the one to get.  There is a much more common “Tribute” to Hard Core Logo CD out there, and it’s even included with the DVD of the film.  For some reason, the actual songs from the movie as performed by Dillon (and Swamp Baby) were much harder to find.  It was Aaron at the KMA who pointed me in the direction of this CD on the Discogs.

(By the way, there were two Hard Core Logo alumni who later moved on to Battlestar Galactica — Callum Keith Rennie, and John Pyper-Ferguson*.)

The guy on the far left is a Cylon.

Hard Core Logo’s material is a mixture of originals and covers.  The monster riff of “Who the Hell Do You Think You Are?” commences the soundtrack with Hard Core Logo’s signature tune.  Dillon’s snotty vocals perfectly nail the vibe of the movie.  It’s dangerous sounding punk rock, pissed off but simultaneously fun.  Equally dangerous is “Rock and Roll is Fat and Ugly”, and let’s not forget the Canadiana of “Edmonton Block Heater”.   For some serious pain and heart, check out “China White”.  Headstones fans are automatically going to want this whole soundtrack, because Dillon’s voice and the sound of Headstones are so closely associated.  Dillon is 100% genuinely the real deal.  Always has been.

While the original songs are all strong throughout, there are two tracks in particular that stand out.  These are “Blue Tattoo” and a cover of the Dead Boys’ “Sonic Reducer”.  I’ve heard the original, Pearl Jam’s version, and Hard Core Logo’s.  It’s damn hard to pick a favourite.  Dillon absolutely owns it.  It’s like he put his foot down and said, “This one’s mine now, fuckers.”  The anger is palpable.   But it is “Blue Tattoo” that is forever inked on my brain.  This punk ballad bleeds heart and soul.  All the ingredients mix just so, and it becomes the consummate combination of sentiment and edginess.

Most people are going to buy this CD just for the Hard Core Logo tracks, but there is some excellent additional music after that.  Swamp Baby without Hugh Dillon provide a cover of “Hawaii” by the Young Canadians.  Short n’ sweet, and then on to some actual punk classics:  Teenage Head (“Bonerack”), the Ramones (“Touring”), and Chris Spedding (“Wild Wild Women”).  I can always go for some Teenage Head, and you can hear a lot of Teenage Head in Hard Core Logo’s tunes.  As for the Ramones, Joey had a brief cameo in the film, lending it some extra authenticity sauce.  Although I find many Ramones tunes to have a sound-alike quality, “Touring” just makes me smile.

It’s rare to find a soundtrack so perfectly composed of original music and classic tunage.  It’s one of the things that made Hard Core Logo, the movie, such a triumph.  See it, and get this CD.

*Oh all right, I’ll go on.  Rennie played guitarist Billy Tallent in Hard Core Logo, and Number Two in Galactica.  Pyper-Ferguson nailed the role of John Oxenberger in Hard Core Logo, and played the asshole-ish Captain Cole ‘Stinger’ Taylor on Galactica.  He returned to the franchise on the prequel series Caprica, playing the villain Tomas Vergis. 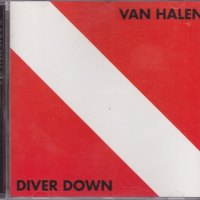 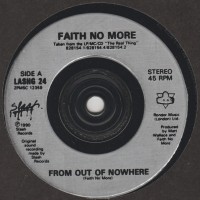