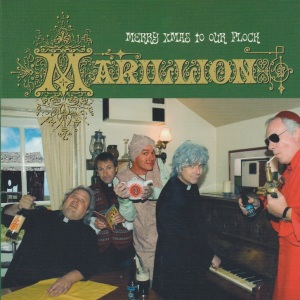 Every year, like the most reliable loyalty program in the world, Marillion reward their fanclub members with a special Christmas release.  Each one has exclusive music on it, some more Christmas-y than others.  The main exclusive on the 2005 Christmas release is a live set by “Los Trios Marillos”:  a stripped down trio version of the band.  Los Trios does acoustic versions, usually for radio sessions, and consists of singer Steve Hogarth, guitarist Steve Rothery, and bassist Pete Trewavas.  These 13 tracks were recorded in Washington DC for XM radio, featuring a wonderful cross-section of Hogarth-era favourites.

That’s not all, of course!  Marillion deliver their traditional Christmas message at the start of the CD, campy and tipsy.  Bonus points if you’re from North America but can still translate everything the band says.  It takes them a few takes to finally get it to their, err, satisfaction.  “We hope you have a really good Christmas, don’t get too drunk, and we’ll see you next year.”  Then, “That’s not written down at all!”  Usually these albums include a brand new studio Christmas track too, and this time it’s the celtic “Erin Marbles”.  It’s a hyperactive Irish jig with mandolin, tin whistle, squeezebox, fiddles and bodhran.  Calling this a Christmas track is a bit of a stretch, as it is basically the song “Marbles” from the same-titled album done up for fun, mixed with a medley of Christmas tunes.  There is no question it’s fun for the fans, but nobody except fans will “get it”, so it’s not really useful for mom’s Christmas mix CD this year.

The Los Trios set commences with the downer “Hollow Man” which is an abrupt change of moods.  The was recorded live with an audience, but they are so quiet during “Hollow Man” you could hear a pin drop, which makes the song that much more haunting.  It is performed solo by Hogarth only accompanied by piano.  “It’s a little early in the morning to be singing,” says Steve.  Fortunately things become upbeat if only for a little while on “Cover My Eyes”, a song that is brilliant acoustically.  If you have heard Marillion’s piano treatment of this single, then you will recognize this arrangement.  It might have been too early to sing that morning, but Steve manages just fine, including the high “pain and heaven” section that challenges every mere mortal.  Rothers and Pete join Hogarth at this point for the B-side “The Bell in the Sea”, which Steve mis-introduces having lost his place in the set list!  It’s live radio, folks.  This is the jazzy bass-oriented acoustic version that the band had been performing since at least 1998, very different from the nautical epic original.  They then return to the song that H was beginning to introduce, “Runaway” from Brave.  It was the song that kickstarted the whole concept of the album.  It is a dark and emotional band and fan favourite, but stripped down to a trio format, it is even more delicate.

The first of four songs from the most-recent Marbles is the dancey hit “You’re Gone”.  Acoustically  it is a different animal, but just as beautiful.  The focus isn’t on the beats but on the melody.  Another song that is completely altered is “Dry Land” from Holidays in Eden.  It is slowed down with a gentle electronic pulse as it rolls softly.  “Fantastic Place” from Marbles flows naturally from there, and Rothery’s solo is absolutely supernatural.  The set really moves at this point, with minimal talking.  “This is the 21st Century” from Anoraknophobia burns quietly but strongly.  On album it percolates with unusual electronic effects, but live it simmers with the hot tone of Steve’s guitar.

“Easter” is a bright light in the set.  This version starts very quiet, slow and understated.  It’s an inventive take, and it slowly builds to the resemble the original, though it ends early.  “Marbles 1” and “Don’t Hurt Yourself” are the last of the new songs presented, and the audience get right into it.  “Don’t Hurt Yourself” has to be one of the best songs Marillion has ever written, and the clapping crowd energizes it.  “Don’t Hurt Yourself” was one of many highlights on Marbles, but here it is head and shoulders the winning track.  A wonderful performance of an exceptional track.

Old favourites end the radio session:  “Answering Machine” (from Radiat10n) and “Man of a Thousand Faces” (from This Strange Engine).  “Answering Machine” should be very familiar, as this acoustic mandolin and guitar arrangement has been recorded many times before.  The handclapping crowd returns to finish “Man of a Thousand Faces” with class.  This song has always been acoustic, so this does not tread far from its roots, though it is shortened for the trio format.

You can’t buy this CD anymore and the chances of stumbling upon one in the shops are nil, however you can still download it by joining the official Marillion webUK fan club.  It is well worth it.  You get three thick, glossy full colour magazines, this year’s Christmas CD, and access to download all the old ones and much more.  Worth thinking about, or adding to this year’s Christmas list.