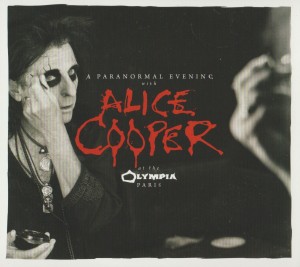 You don’t so much ask if a new Alice Cooper live album is good; instead you just ask what songs are on it.

A Paranormal Evening With Alice Cooper at the Olympia Paris (what a mouth full) features “Hurricane” Nita Strauss on lead guitar, Chuck “Beasto Blanco” Garric on bass, drummer Glen Sobel, and guitarists Ryan Roxie and Tommy Henriksen.  Guys like Garric and Roxie are the veterans, but Nita Strauss is a serious focal point.  She can really shred.

The setlist spans most of Cooper’s career.  The CD even opens with “Brutal Planet”, which was the set opener back in 2000 on the Brutal Planet tour.  The industrial-tinged song is less jarring live.  From there, onto the oldies:  “No More Mr. Nice Guy”, “Under My Wheels” and “Department of Youth”.  Alice’s band are capable backing singers and they tend to focus on the melody while Alice does his schtick with character.  I won’t tell you who Alice name-drops in “Department of Youth” (remember, it used to be teen idol Donny Osmond).  That’s a surprise.

Another surprise:  the fabulous “Pain” from Flush the Fashion.  The powerful dark pop is heavier live, enriched by three guitars in harmony.  Alice can still infuse the song with suffering, even decades later.  Back to an oldie for a moment with “Billion Dollar Babies” (absolutely massive with three guitars) and then another surprise:  “The World Needs Guts”.  Very few songs from Constrictor get played live, and this one is a live album debut.  There’s a certain nostalgia now for the Kane Roberts era, and “The World Needs Guts” thrills my gorilla on this album.  Then to another niche album, 2005’s garage rock of Dirty Diamonds.  It’s an underrated gem of an album, and so “Woman of Mass Distraction” is a welcome selection, though others would have been more interesting.

“Poison” is a perennial, and here it is again representing 1989’s Trash album.  Every Cooper lineup has its own touch with it.  This one isn’t the sleekest version but it’s the most thunderous.  To cap off the first CD, it’s “Halo of Flies” from “Killer”, almost 11 minutes in length.  This is the kind of deep cut you crave, complete and unedited.  Once again, the three guitars really enrich the sound.

Another regular, “Feed My Frankenstein”, is one I could live without.  But this one is a generational song.  Fans who grew up in the early 90s remember it from Wayne’s World.  It’s the song Mrs. LeBrain sang along to in the car.  Boring to some, a highlight for others.  Then it’s back to “Cold Ethyl” from Welcome to My Nightmare, a stone-cold classic (pardon the pun) highlighting the rock and roll side of Alice.  The trade-off guitar solos are a newer twist.  From the same album comes “Only Women Bleed”, and really the only slow song in the set.  Alice doesn’t need to take it slow!

It took this long to play the one and only new song, “Paranoiac Personality“.  It’s not always like this — in the past Alice has peppered his set heavily with new material.  For whatever reason, this time the focus is on the variety.  There are new songs that will unfortunately never get the chance to shine live.  Still, it’s hard to complain, especially when the next song is “Dwight Fry”, the second epic on the album.  A medley of “Killer” and “I Love the Dead” keep that same vibe.

“I’m Eighteen” is the beginning of the end, with “School’s Out/Another Brick in the Wall” ringing the final bell.  Listen to the band introductions for something that Alice rarely does.  Take a minute and appreciate how great Alice’s band is — and always has been no matter the lineup!

A Paranormal Evening With Alice Cooper at the Olympia Paris (say that three times) comes highly recommended.  Anyone who collects Alice Cooper will find something here that they’ve wanted to hear live.  Has any artist been as great as Alice for as long as Alice?  Very few, and this album proves he’s still the one and the only. 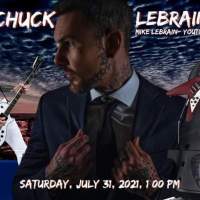