Blue Rodeo are taking some heat these days for their stance on indigenous rights.  A small group of fans are abandoning the band for (quote-unquote) “going political”, but politics is nothing new for this Canadian institution.  In 2015, they recorded “Stealin’ All My Dreams” just in time for the 2015 Canadian election.  (The mp3 file had a tag reminding fans to vote!)  It was pretty clear from the song where they stood on the issues.  Further back, in 1996, they participated in Pine Ridge, a benefit CD for Leonard Peltier.  It’s a long story that has resulted in at least three movies, a U2 song, and support from Rage Against the Machine.  Greg Keeler’s contribution to the Pine Ridge CD is one of the strongest songs of his entire career.

The track may be credited solely to Greg Keelor, but if you look at the players, it’s actually Blue Rodeo.  Jim Cuddy, Bazil Donovan, Glenn Milchem, James Gray, Kim Deschamps…the gang’s all there, the classic Five Days in July lineup.  So it’s a Blue Rodeo song in every way but in name.  At 10 minutes in length, it is unprecedented in complexity for this great band.  And they wore their politics directly on their sleeves.

The government man hate the colour of your skin and your dogshined reservation,
No reasons why those two FBI were on Oglala land chasing that red van,
And the FBI admit Leonard Peltier did not commit the killings that have
Kept him 20 years in prison. 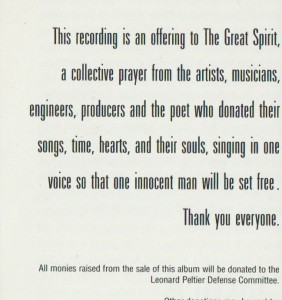 The track runs the gamut from quiet, contemplative picking to soulful and dramatic choruses, to a funky mid-section, and a huge ending.  It’s as epic as Blue Rodeo get.  It tugs at the soul, and stimulates the mind.  It’s a protest song in the grandest tradition, right out of 1969.  And nobody can flat-out play like Blue Rodeo.  Pedal steel, dobro, organ…it’s all here.  And it’s massive.

Stay political, Greg.  Regardless of where you fall on the current situation in Canada (it ain’t pretty), we can all agree that the world is richer for all the great protest songs of the past.  Here is another one, now an oldie itself.