Did Harrison really cause Erik and Rob to walk off the show?  Did Rob drop two “F-bombs”?  Did Harrison actually smile in the featured image?  Was this one of our best shows ever?

Our esteemed panel of Jedi masters tonight were:

Opinions veered wildly on the 11 Star Wars films we examined in great detail tonight.  While you may never find a more wretched hive of scum and villainy, I also will contend you will not find a more passionate Star Wars discussion than the one we had this week.

Truly one of our best shows, and we barely scratched the surface of these films.  Perhaps a deeper dive is in order for the future.

The LeBrain Train: 2000 Words or More with Mike Ladano and Friends

This is a show that has been in the works a long time.  A long time.  I understand you’re Star Wars fans yourselves!  Then you will love this show we have lined up for you tonight.

The Nigel Tugnel Top Ten list format — a top 11 — is perfect for cases like this.  Tonight our panel of experts (top men!) will rank all 11 films (9 Saga movies plus 2 spinoffs).  This is sure to get hairy (Wookiee style) due to the diversity of the panel:

Note:  We are only counting the 11 live action theatrical films, not any made-for-video films, or the animated Clone Wars (which did have a brief theatrical run).  Oh sure, Harrison might try to throw a curve ball but the rules are clear.

At the end of the night, will we have consensus?  I sure hope not!  What I do expect is plenty of lively conversation with maybe a little trash-talk.

I will be going LIVE at 12:30 AM (ET) Saturday morning with Robert Daniels on VISIONS IN SOUND. Tune in on your dial to 98.5 or internet to CKWR!  You folks in the UK can tune in as you enjoy some morning coffee or tea!

Rob says:  “May is Star Wars month on Visions In Sound and we will be celebrating the 40th Anniversary with a slew of special shows. Joining me this week will be special guests Jason Drury, Michael Ladano & Erik Woods to help with the celebration. Featured music will be from the Star Wars prequel trilogy (John Williams). Join Us THIS Saturday 12:30-2:30am (ET)”

Includes:  Star Wars: The Phantom Menace, Attack of the Clones, Revenge of the Sith, A New Hope, The Empire Strikes Back, Return of the Jedi, and three bonus discs.

Star Wars on blu-ray…it took a lot less time than it did for Star Wars to arrive on DVD!  In special features and deleted scenes alone, it was well worth the wait. You can’t do a box set like this without the bonus of unseen footage. The good news is, The Complete Saga is loaded with unseen special features and deleted scenes. In fact, the Tosche Station scene (deleted from A New Hope) is worth the purchase alone for the true fan. It’s that great.

Will this be the last time we buy the first two Star Wars trilogies? Heck, no! When 3D comes out, everybody will be having the same discussion all over again!  And when the sequel trilogy is complete, we’ll be doing it again.  Will Greedo still shoot first? Well, in my mind I have long accepted that Han shot first. Only in some weird Lucasverse is there a way that Greedo could shoot and miss at that range. That close, I’m sorry, Han is toasted smuggler stew.  Disney says there is no way to re-release the original trilogy without its Special Edition enhancements, as the original film materials are too far gone.

However about 10 years ago or so, Lucas did an official DVD reissue of the ORIGINAL original trilogy, which I went out and bought on day one. It was satisfying, it looked better than my old VHS copy, but it wasn’t cleaned up nice like the special editions were. Which, in my opinion, is fine. It looks good and it’s as close to your childhood memories as you’ll ever get. After all, we didn’t have 1080p TV tubes.

Accepting that a Blu-ray version of the “ORIGINAL” original trilogy will never happen, I am very satisfied with my Blu-ray of the Complete Saga.

The sound is awesome, very deep, and annoying to the neighbors.

The video is perfect; I realize there are probably some colour changes here and there but I’m not about to do an A/B test and find them. I don’t care, it’s sharp and bright and clear and even Phantom Menace looks good!

Content wise, you know what? Hell, I’m actually enjoying Phantom Menace. I’m lost in that moment in 1999 or whatever it was, when we sat there watching it the first time, trying to figure out who the new baddies were and checking out all the cool designs, which all stand up today. Except Jar Jar. Take him out and the movie’s not half bad at all, flawed as it may be.

Bonus featues: I wanted to watch the deleted scenes and there is good news and bad news. The bad news is, I hate how the deleted scenes are organized. You have to click the movie you want, click the planet you want, and then pick deleted scenes from the features. You can’t just go to a menu called “Deleted Scenes”. Anyways, these were mostly great although some action scenes were just animatics. And, I don’t think these deleted scenes overlap at all with the scenes provided on previous DVD editions. For example there was no Greedo scene in the Episode I deleted scenes, but there certainly was on the original DVD release for Episode I. That goes for the special features in general…I don’t think there are many that overlap at all with the ones you already have.  That could be good or bad; for most fans that’s good.  You’re buying new stuff, not the same stuff you have already.

Highlights: As mentioned the Tosche Station scene, which has all the soul of old Star Wars along with finally tying up the Biggs storyline. Also welcome was the attack on the droid control ship from Episode II — previously only available to subscribers to Lucasfilm’s ill-fated Hyperspace service.

There’s also an hour and a half (!) of spoofs from all over the place, including The Simpsons, Family Guy, Robot Chicken, Saturday Night Live (including that hilarious Kevin-Spacey-as-Christopher-Walken-as-Han-Solo one), Colbert, That 70’s Show, and many more. Most of these, I have never seen.

This is exactly what anybody who had reasonable expectations wanted.

You shall not pass, nor get anything for free

Record store employees get a lot of free shit.  From shirts to discs to posters to the oddest promotional merchandise you can think of, they get a lot.

Reason being?  The word “used”.  The record distributors automatically assumed we would sell everything that we got for free.  Which we didn’t, because we didn’t want to hurt our already tenuous relationship.  This is where my personal experience differs from the average record store guy.  I got very, very little free stuff over the years.

I did get a few things.  Most of this stuff isn’t around anymore, either given away or wrecked.  Here’s a complete list of everything that I personally ever got for free from a record label during my 12 year tenure at the store, and it ain’t much!  This stuff would just show up in boxes of discs that we ordered.

Of these things, all I have left are the stickers and the Kiss sweatshirt, slowly fading from many washes.  Not a lot to show for 12 years of the record store grind, but as I said, the record companies really hated giving us anything for free.  The funny thing is, other people (DJ’s, employees at other record stores) would come in and sell us dozens and dozens of promotional discs that they got for free.  So the irony is, even though we played by the rules, we got stiffed.  The other people who broke the rules got free shit all the time!  Ain’t it the way? 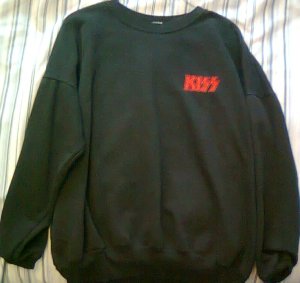 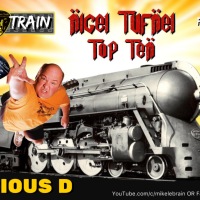 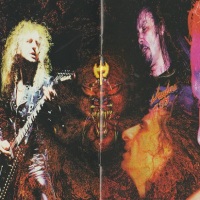