Part 18 of my series of Kiss reviews, leading up to the release of Monster!

Killers is a greatest hits CD with four “new” tracks, released in ’81 everywhere except North America. After The Elder bombed, the European record company demanded a greatest hits album with new songs, specifically rock songs, no exception. Paul Stanley sings lead on all four new songs, and Paul, Bob Kulick & Robbin Crosby play guitar in Ace’s absense.  Yes, Ace was on the album cover but nowhere on the album.  He was effectively though not yet officially out of the band.

“I’m A Legend Tonight”: A great song with Eric Carr finally showing off what he can do on the drums. Although Paul himself tends to disown the songs on Killers, this is great. The riff is very memorable and the song is catchy (even if the chorus reminds me somewhat of “I’m So Excited” by the Pointer Sisters).

“Down On Your Knees”: Co-written by Bryan Adams (his first but not last collaboration with Kiss), this is a nondescript rocker. Catchy enough as an album track, but not outstanding. The cymbals are mixed a little high.

“Nowhere To Run”: The was one of the first songs written for The Elder sessions, and you can kind of tell by the falsetto that Paul employs in the bridge. It was dumped when they decided to go all concept album on The Elder, but here on Killers it is the standout track. The riff is stellar, the acoustic intro is cool, and Paul’s singing is perfect.

“Partners In Crime”. The weakest song. It’s a slow plod with nothing really going for it.

The rest of the album is filled with the greatest hits, but it is crucial to note that aside from one track on an Australian-only version (“Talk To Me”), all songs are sung by Paul and Gene. I do not believe any of the hits are remixed, but some feature edits/fades not present on the original albums (“Detroit Rock City”). I loved that “Sure Know Something” was included as it’s one of Paul’s under appreciated classics.

Killers is actually a great CD for new and old fans alike, which is a rare thing in the KISS catalog. There are cheaper compilations out there, but this one has a nice variety of tunes including oddballs like “Sure Know Something”. Of course there’s the four new songs too, two of which are really special. 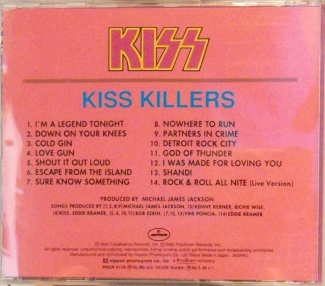