I had no idea what to expect when Van Halen released Balance in 1995.  Grunge had come and gone, the landscape vastly altered since Van Halen’s last wax in 1991.  Eddie was the king of pyrotechnics, and that kind of playing was not in vogue.  How would the band adapt?  Well, they didn’t.  Balance takes Van Halen into a highly polished, commercial direction. This is “balanced” with heavier grooves and a couple more “serious” lyrics.   The result turned out to be one of Van Halen’s most pop outings.

Produced by the late Bruce Fairbairn, Balance borders on over-polished. The sounds are rich, thick and glossy, but miles away from the raw guitar pummeling of the early days, or even the previous For Unlawful Carnal Knowledge. Eddie Van Halen, in a Guitar World interview, said the album was characterized by “better song writing”, but I think what he really meant was “more commercial songwriting”.

The album starts with a different sound for Van Halen: Gregorian chants. Hey, it was the 1990’s and later the same year, Iron Maiden would introduce their X Factor album with similar chants, no shit. The chanting merges into a heavy guitar riff accented by a wall of droning fills. This is “The Seventh Seal”, and Sammy’s voice is in top form. Michael Anthony’s bass rolls and hits the notes at just the right moments. This is truly a great song, completely different from Van Halen of old, but surely a triumph.

The next tune (and second single) however, “Can’t Stop Loving You”, is an embarrassing foray into pop. While Van Halen wrote pop stuff before (“Love Walks In”), this song lacks cojones of any kind. The guitar is really thin, Alex Van Halen cha-cha’s his way through the drum fills, while Sammy sings a lyric that David Lee Roth would have used to wipe his ass.

“Don’t Tell Me (What Love Can Do)” is anything but a love song. Sammy tackles drugs, faith, youth in crisis, and the 1990’s. Hagar has never sounded more foreboding, or mature for that matter. Eddie’s riff is simple, but dark and rhythmic. Michael locks onto the riff, creating this unstoppable wall of groove. 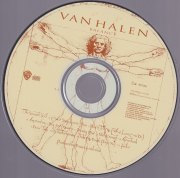 Sammy has an unfortunate habit of being too jokey when it’s inappropriate. Eddie didn’t like the lyrics to “Amsterdam” and you can see why. There is nothing wrong with this mid-tempo rocker with spare Eddie riff, except the lyrics. After the previous song’s warnings about drugs, suddenly Sammy is singing, “Whao, wham bam! Roll an Amsterdam!  Stone you like nothing else can.” Granted, two very different drugs (heroin vs. weed) but lyrically “Amsterdam” isn’t winning any awards.

“Big Fat Money” is very old-school boogie ‘Halen in intent; the music could have fit on virtually any of the first six albums. Producer Fairbairn had Eddie playing a fatbody jazz guitar during the solo section (mirroring a trick he pulled with the Scorpions two years previous) but it doesn’t save the song.  I’ll give VH a C for trying, but “Big Fat Money” is a C+ at best.

“Strung Out” is a jokey opener to the ballad “Not Enough”. Basically, this is Eddie messing with (and wrecking) a piano from the inside! This was recorded years prior, at Marvin Hamlish’s house in Malibu during the writing sessions for 1984. Van Halen destroyed Hamlish’s white Yamaha piano and had to have it repaired.  It was covered with cigarette burns, and Van Halen had attempted to play the piano from the inside, by throwing balls at the strings.

That fades into “Not Enough”, another ballad.  Not quite as embarrassing to listen to as “Can’t Stop Loving You”, but not by much. Really, in the year 1995, Van Halen should have stuck to the serious themes, and guitar-based songs. Tunes like this made Van Halen seem completely out of touch with what was happening in the 1990’s. Within months of its release, Shannon Hoon would overdose, Layne Staley locked into a dance of death with smack,  and Richey Edwards of the Manic Street Preachers went missing (presumed dead) after suffering long bouts of depression. These were dark times in rock and roll.  I just wasn’t feeling “Not Enough” and “Can’t Stop Loving You”, then or now. 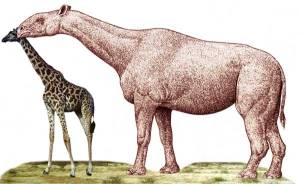 “Aftershock” is another hard rocker, nothing embarrassing here, good riff, good melody, good song. Won’t make anybody’s desert island Van Halen list, however. A pair of instrumentals follow, an interesting touch seeing as Van Halen didn’t do too many instrumentals post-Dave. “Doin’ Time” is Alex messing around on the drums, which segues straight into “Baluchitherium”. “Baluchitherium” was so named because a baluchitherium was one of the biggest prehistoric land mammals known — and Eddie felt a stomper like this tune needed to be named after one of the biggest baddest animals to ever walk the Earth.  Unlike most VH instrumentals, this one just sounds like an unfinished song — an idea without a vocal.

“Take Me Back (Deja Vu)” is a pop song that I don’t mind at all, accented with acoustic guitar. Apparently Eddie had the guitar part in his head for decades, going back to the pre-Van Halen 1970’s, when he was a kid. It’s very laid back, but also very summery and the lyrics are decent. 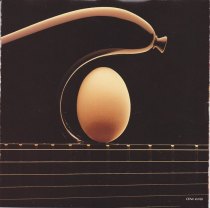 “Feelin'” is a morose song but with an epic, powerful chorus. It is very different from anything the band had done prior, and hints at the directions to come in the Cherone years —  for better or for worse.  It’s a good album closer, as I like a dramatic ending from time to time.

If you’re lucky enough to be in Japan, there was one bonus track: this is the groove laden, oddball “Crossing Over”.  It’s a song about the afterlife and lyrically it’s probably the best tune of the bunch. The bass part alone on this song was so infectious that in my opinion, it is actually the main hook of the song. I’d consider this the best track on the album myself.  The arrangement is fairly unconventional, and the drums tumble and roll against the groove in a cool way. Again, apparently this song dates back to 1983! I think you will not regret tracking this one down.  Thankfully it was easier to find on the “Can’t Stop Loving You” single.  Notably, the Japanese version of the cover was also toned down.

On the whole, I think the majority of Sammy’s final Van Halen album is not to be ashamed of. I think the songwriting and lyrics were stronger than Unlawful, if only the production had been less geared towards pop and a couple ballads deleted, this might have been the very best thing Van Hagar ever did. However I’m not always the most objective guy.  There are Van Halen fans out there who don’t think much of Balance.  Some of those fans really, really don’t like Balance.  In order to end this review with some “balance”*, I found one and asked for his opinion.

Craig Fee: “I kept re-listening to Balance, doing my best to like it because it was 75% of my favourite band. It turned out to be more disappointing than my illustrious NHL career and my attempts to have a three-way with Rose McGowan and Liz Phair. “Can’t Stop Lovin’ You” is a steaming pile. It still is.”

I don’t have any sort of rebuttal for that.

* Two clear signs of a writer doing a half-assed review:  Using the same pun twice, and padding it out with quotes from other people.

The band were foreshadowing the firing of Hagar with subtle hints left on the back cover of Balance.