I was quite legendary at the Record Store for my celebrity crushes.  I talked before about about Dayna Manning — she was but one on my list of fantasy girls.

T-Rev and I were given tickets to see Helix at Stages, in 1996.  Opening was a new band fronted by ex-National Velvet singer Maria Del Mar.  You might remember National Velvet’s hit, “Sex Gorilla”.  Her new band was good, and after the show Maria came and sat down next to us!  Gasp!  She was really loaded.  T-Rev and I handed her business cards for our stores and encouraged her to visit, call, sell albums there on consignment, anything!

Unfortunately, it seemed to us that she preferred the sharp Austrian looks of Peter the Rocker, who also attended the show.  Maria wouldn’t leave him alone.  She never called us either.  At least Helix were good!

Tastes as sweet as “Sex Gorilla”

A couple friends of ours opened for this band in 1998.  I drooled all over the stage looking at singer/guitarist Nicole Hughes.  That red hair.  The leather skirk, playing that guitar.  Oh yeah.  I was in love.  I admired every magazine cover she appeared on.  One of the girls at work used to try to bug me by commenting that Hughes’ mouth was “too big”.

I never had the guts to speak to her at any of those concerts!  Nothing more than a “great show, eh.”  I was given copies of their two albums for my birthday one year.  Imagine my horror at finding that I didn’t really like them.  I sold them off before I quit the store.

I was never a Kittie fan.  I’m not denying their talent, I’m just not a fan of that sound.  I’ve never bought any of their albums.  I only like a couple tunes. But as far as I was concerned, I did like Talena Atfield, the bassist!  After she left Kittie, I found her on MySpace and sent her a message.  Something lame like, “Hey, I manage a record store, you should come in if you’re in town,” or whatever.  The response was brief, but positive – she called me cute!  Well didn’t I go and tell everyone at the store about that?

So, they made fun of me for yet another rock star crush, but it turned out OK in the end.  Now I’m married, and it’s fun to look back of these rock crushes. Mrs. LeBrain used to like Trent Reznor, so I know I’m OK!  (She says she likes her men short.) 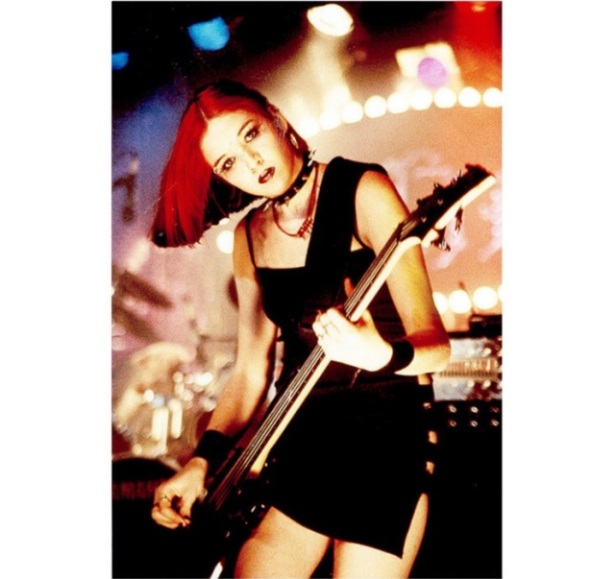