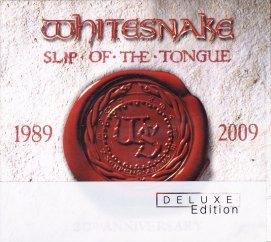 Once again, instead of two CDs, you get an expanded CD and a brief DVD. The lack of decent bonus material really frustrates me because there is more in the vaults. You know there has to be more in the vaults. In fact in the liner notes, David tells us that there is more.  He name-drops several unfinished songs that didn’t make the cut, but fans would kill to hear.

Slip Of The Tongue was not the best Whitesnake album (not by a long stretch), but with 20/20 hindsight and the presence of Steve Vai, it’s fun to listen to. Yes, it’s too glossy, and yes, Vai was not the right guy to be in Whitesnake, but the result is one of those strange one-off’s like Black Sabbath’s Born Again, or Motorhead’s Another Perfect Day. It’s an album that doesn’t quite fit with the back catalogue, but has become a cult favourite.  I have long been a fan of it, simply because Steve Vai is jaw-dropping even when playing pedestrian hard rock.

For Vai fans, he plays it pretty straight here, not a lot of craziness.  There’s a broken string on one song, and some cool solos, but nothing bizarre like you’ll find on a Vai solo album.   If  you want to hear him just do some serious hard rock and balladeering without the crazy stuff, this is the CD for you. Within the scope of Whitesnake, Vai sets the album on fire; throwing in notes where you didn’t know they could fit, making sounds you didn’t know a guitar could make, and overdubbing a mountain of fills. Just check out opening track “Slip Of The Tongue” for some serious burning, via a 7-string Ibanez guitar through an Eventide harmonizer.

Song-wise, this is mostly hard rock and very little blues. The slick remake of “Fool For Your Loving” (originally from Ready An’ Willing), which Coverdale’s liner notes reveal he didn’t want to do, is inferior to the bluesier, groovier original. “The Deeper The Love”, purportedly a soul song, is actually just a great hard rock ballad with some wonderful Vai licks. The best songs are the epic Zeppelin-esque “Judgement Day”, the aggresive “Wings Of The Storm”, the hit rocker “Now You’re Gone” and the signature Coverdale album closer “Sailing Ships” which has become one of his philosophical classics.

Among the sparse bonus tracks: the B-side “Sweet Lady Luck”, which is available many times elsewhere now, on both Whitesnake and Steve Vai compilations.  Also, the US single mix (by Chris Lord-Alge) of “Now You’re Gone” is included but many fans would be hard pressed to tell the difference. The promo-only “Vai Voltage Mix” of “Fool For Your Loving” predictably throws in a lot more guitar. (I already had this on a promo single that I acquired for $2, but this is good for fans to have.)  There are two tracks from the 1990 Donington Festival, which would have been a real treat, because these songs (unlike the other bonus tracks) had never been released before. This was the first ever official release of Whitesnake live stuff with Vai. But it was also just a sneak preview of an actual 2 CD/1 DVD release of the full Donington show.  Double dipping sucks!

Then, just like on previous deluxe editions…another live track by a more current edition of Whitesnake! Honestly, this ticks me off for two reasons. One, you can get the new live Whitesnake albums with no difficulty and two, it’s from 15 years later and has nothing to do with Slip Of The Tongue. Yet these new live versions pop up on all these Whitesnake reissues. Why?

The DVD is brief and hardly as satisfying as another CD would be. You get the three original music videos, the two Donington live songs, and then another bunch of unrelated live stuff. Two live tunes from 1997’s Starkers In Tokyo acoustic show, and yet another live track from a more recent Whitesnake live DVD, which is available on its own. Again, I feel this is a bit of a ripoff. It’s nice to have these Starkers tunes on a DVD, but why not release an entire separate DVD of that show? It has nothing to do with Slip Of The Tongue, except that Coverdale played a couple of these songs live. 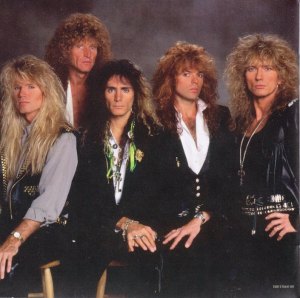 The booklet by Coverdale is a real treat, revealing much previously unknown tidbits to tease your friends with. I had no idea that Adrian Vandenberg for example managed to play a little bit of backing guitar on the album. Previous issues of the CD stated that Vai handled all guitar duties, but that has turned out to be false. Also, Coverdale talks a bit about Glenn Hughes, and why you can barely hear him sing on this CD, even though he’s credited on backing vocals.

Frustratingly though, Coverdale also mentioned all those unfinished and unreleased songs from these sessions: “Kill For The Cut”, “Burning Heart”, “Parking Ticket”, and so on. These were all titles that I read about 25 years ago in Hit Parader magazine, and wondered why they didn’t show up on album B-sides. The booklet reveals that they were never finished, but that is no excuse — they should have been presented here as bonus tracks instead of this unrelated live stuff. The Sabbath deluxe editions have tons of unfinished songs on them. So do some of the reissues of the early Whitesnake albums, such as Come An’ Get It.  This CD should have been the same.  Unless David is hanging onto these songs for some kind of anthology box set in the future, I can’t figure out how they arrived at the selections for this reissue CD!  It’s maddening.  Do it right, or not at all.