Fans of discerning taste cried tears of joy when Faith No More, one of the most underappreciated bands of recent times, finally received the deluxe edition treatment.  Faith No More may have paved the way for more popular acts like as Korn, System of a Down and Incubus, but they seemed forgotten by new young rock fans.  These deluxe editions have put their classic albums back on the racks.

Though The Real Thing is the album that launched them onto MTV and contains their best known hit (“Epic”), it’s the only Faith No More album that sounds like this.  Mike Patton affected a nasal tone to his singing that he dropped by the next album.  (Producer Mike Wallace suggests that Patton sang this way on The Real Thing partially to separate Faith No More from Mr. Bungle, who he still had massive loyalties to.)  It’s the most mainstream and most “metal” of their albums, with much of their other material being more abstract, artsy and bizarre.  Though they loathed the term, you can hear how Faith No More were considered “funk metal” from 1989-92.

Opener “From Out of Nowhere” is a living embodiment of its own title.  A keyboard and guitar riff, simple and catchy, pummel the speakers as Mike Patton makes his debut.  Original singer Chuck Mosely was gone and Patton emerged, fresh from the aforementioned Mr. Bungle.  Nobody had ever heard anything like Mike Patton before.  His range and power were enviable, but he clearly liked taking the piss too.  “From Out of Nowhere” was the first single and a brilliant choice for trying to sway the uninitiated.

Of course “Epic” was the big one.  Its timely combination of rap and metal was on the cutting edge.  The lyrics were nonsense* and Patton’s goofy personality shone through.  It was close to the edge of novelty.  Jim Martin’s power chords and harmony leads kept things from falling off.  On the rhythm, Mike “Puffy” Bordin is one hard-hitting drummer, keeping things anchored solidly.  You can really hear the funk on “Falling to Pieces”.  It’s there in Billy Gould’s bass and Patton’s soulful (nasal) voice.  This too was a single, following the smash hit of “Epic”.

Faith No More also crossed over to the thrash crowd with “Surprise! You’re Dead!”.  An aggressive banger like this was custom made for Anthrax fans.  Most importantly, Mike Patton got to show off some of what he is capable of.  The guttural howls, painful shrieks, and insane laughs burrow into your ears.  They are hooks themselves, though certainly not in the traditional sense!  This is a contrast to “Zombie Eaters”, with quiet acoustic sections and intricate picking by Martin.  “Zombie Eaters” does not stay that way, and soon transitions into a rumbling, earthquake riff.  Roddy Bottum’s keyboards add tension, and Mike Patton piles anguish on top of that.  An even more powerful song follows:  “The Real Thing”, 8:01 of light/shade and dramatic performances.

Pop and funk collide on “Underwater Love”, the most accessible song on the album.  It evolved live into something very different, as you will hear on disc two.  Patton did it with more of his own style once they got it out on stage.  “The Morning After” has a haunting vibe, moving into a heavier chorus.  Jim Martin’s guitars are clearly in the metal domain, like the odd man out, but still essential.

The album begins to drift to a close with “Woodpecker From Mars”, the only instrumental.  Roddy has his keyboard set to the “violin” tone, and is the lead melodic focus of this punishing track.  Everything else is a blur of guitars, drums and bass.  Their unique cover of “War Pigs” is next, though pretty straight-laced compared to the live version on disc 2.  Finally “Edge of the World” closes the album with a slow piano waltz completely unlike anything else on the album.

The second disc has a wealth of treasure, though not all the B-sides and rarities out there.  “Sweet Emotion” was released a few years back on The Very Best Definitive Ultimate Greatest Hits Collection, but its original source is a flexi-disc from Kerrang! magazine.  It is not an Aerosmith cover; rather it is an early version of “The Perfect Crime” from the Bill & Ted’s Bogus Journey soundtrack.  Two more bonus tracks, “Cowboy Song” and “The Grade” (an instrumental) are also available on the album Live at the Brixton Academy.  Both good songs; “The Grade” really shows off some very sweet Jim Martin steel guitar.  “Cowboy Song” (nothing to do with Thin Lizzy) is good enough that it could have been a single: catchy, melodic and punchy.

Remixes of “Epic” and “Falling to Pieces” are taken from an old two-song CD single, although this remix of “Falling to Pieces” is longer by 11 seconds compared to the single.  They add a bit more echo and other effects as well as some edits.  An extended remix of “From Out of Nowhere” lengthens the song by a minute, by adding more instrumental sections.  Five live songs round out the B-sides and rarities, including two that were chopped from the CD release of Brixton Academy.  (Speaking of which, that’s a deluxe edition we’d like to see.)  “As the Worm Turns” is one of these Brixton tracks, an old essential Chuck Mosely song given the Patton treatment.  Patton’s gurgling during “War Pigs” is a career highlight!   Live BBC recordings of “Epic” and “Woodpecker From Mars” are missing from this deluxe edition, but available on an old 7″ single (“From Out of Nowhere”).

The Real Thing is an essential album.  Its deluxe edition was long overdue, and fortunately most of Faith No More’s catalogue has been similarly beefed up.  It is not perfect, but few deluxes are.  There will always be more to collect.  This deluxe however will scratch quite a few tracks off your lists. 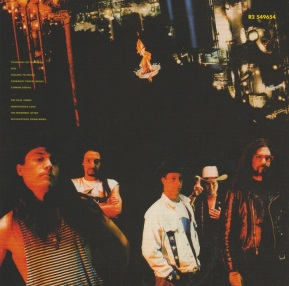 *I recall writing “What is it?  It’s it.” on my English final exam for no particular reason.