GETTING MORE TALE #844: Happy Birthday in the Age of Covid

All I wanted for my birthday was one more weekend at the lake.  During the time of Covid, that’s never been a certainty.

My parents are not young anymore (although my mom would probably fool you).  I have a 96 year old grandmother that my mom cares for.  We have to be extra, extra, extra careful about everything.  The Ontario government announced Phase 3 of re-opening last week and so my mom and dad decided that we could try spending some time under one roof together for my birthday.  I got my wish.

Packing my electronics and my Marvel figures, Jen and I headed up to the cottage Thursday night.  Lately, especially this year, I’ve been trying to roadtrip exclusively to music that I would have played there when I was a kid.  Usually that’s Kiss but this weekend I decided to shake it up and play some Europe.  The Final Countdown and Out of this World were both acquired at the cottage the first time when they were new.  Playing them on the way there was really trippy.  This resulted in a future Europe-based story that I look forward to sharing.

The first thing we did was jump in the lake for a swim.  I clocked in nine swims this past weekend.  The footage wasn’t as stunning as last week; the lake was murkier.  Instead of worrying about making videos, I just decided to enjoy it and live in the moment.  (There are plusses to both approaches, but the wavy video from last week can’t be topped.)

We ate steak for almost every meal.  I cooked a slab of blue-rare perfection that became steak & eggs the following morning.  I sat outside and watched Marvel movies all weekend.  The Incredible Hulk, Ant-Man, and Captain America: Civil War.  I cranked the tunes outdoors as well:  Europe again, and classic Kiss.  Dynasty, Unmasked, and Gene’s solo album were all air-guitared live on the deck.

I was still worried about my parents and their comfort.  After seeking advice, I decided to set up sanitising stations at the door and on the deck.  They arrived on Saturday afternoon bearing hot, fresh French fries courtesy of a local stand called the Cheesy Monkey.  Later that afternoon they had a small party with cake.  My sister came over and next door neighbour Paul stopped by.  Everybody was six feet apart and we handled things like snacks and drinks very carefully.  My dad bought me a stick of meat and everybody else got me Marvel figures.  Do they know me or what?  I think our trial run for having everybody together at the cottage worked out pretty well.  This really helps relieve the stress.

Something else interesting happened this weekend.  First, flash your minds back to 2002.  Marillion were pioneering a new kind of live release, a subscription based series of archive recordings called the Front Row Club.  I was a subscriber from beginning to end (2002-2008) and never missed a release.  One of the perks that early subscribers received was an exclusive Front Row Club T-shirt.  I had completely forgotten about it, until my mom handed it back to me this weekend.  Somehow, it had become the property of my late Uncle Don.  I don’t remember giving it to him, and I don’t think he liked Marillion, but my mom found it in his shirts.  Now it’s back in my closet again.  We’ll never know how or why!

We left Sunday afternoon after an exciting rain storm, though not as big as we’ve seen before.  Then we went to go and visit Grandma who only turned 96 a week ago!  The good news is that she looks exactly the same as she did when she was 95.  We had a great visit though she really hopes we can get back to something more normal soon.  Can’t say that I blame her, but it was actually a pretty normal birthday for me.

The cottage is a special place in terms of family history and mental well-being.  It’s a place I’ve always enjoyed showing off and I hope you can get a taste of paradise from the pictures.

Thank you everyone for the birthday wishes!  I haven’t finished responding to every one and I may have missed a few.  It sure could have been a heck of a lot worse. 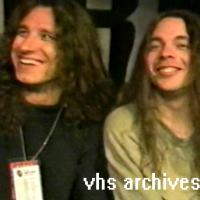