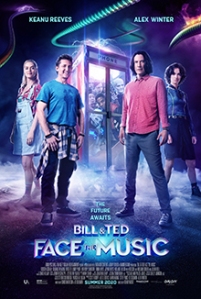 I went into Bill & Ted 3 not expecting much, due to the poor reviews and long-ass time since the second movie (1991).  I came out thinking everybody else got it wrong, and Bill & Ted Face the Music could actually be the best of the series.

Keywords:  “the series”.  This isn’t The Godfather we’re competing with.  Once you shed the rosy glow of nostalgia, realize one thing:  Bill & Ted were never great.  They were always fun, headbanging nonsense.  There was some wit and some great performances thanks to George Carlin and William Sadler, but Bill & Ted were never great.  The movies didn’t make a lot of sense where time travel is concerned, and were essentially just vehicles for the two dumb guys to have dumb adventures.

What is amazing is that the two “dumb guys” (Keanu Reeves and Alex Winter) wanted to come back.  They seemed to be having fun making the movie, which means it’s fun to watch.  What’s new in the last 30 years?  Not only are Bill & Ted still together, but they are still together with their medieval princesses too!  And they even have children — Thea and Billie.  And they are chips right off the old blocks.

One catch though.  Although Bill & Ted’s band Wyld Stallions achieved some early success, they quickly dropped off the map* and never wrote the song that would bring the world together.   And if they don’t do it before 7:17 PM, the universe will cease to exist!  (That doesn’t make sense?  Well neither did the first two films!)

The movie splits into two tangents here, both equally entertaining.  The affable Bill & Ted decide to go into the future, and just steal the song from their future selves.  Meanwhile, Billie and Thea have their own idea:  form the band that will back their dads when they play the song.  They borrow a time machine from Kelly, who is the daughter of Rufus (George Carlin).  Kelly is trying to warn their dads about a time travelling assassin robot (named Dennis) sent back to kill them.

While Bill & Ted encounter increasingly older versions of themselves as they travel further trying to find the song, Billie and Thea recruit Jimi Hendrix, Louis Armstrong, Mozart, legendary Ling Lun, and a cave drummer from the stone age named Grom — the greatest musicians in history.   This is where Bill & Ted Face the Music really surpasses its forebears.  While it was fun seeing Bill & Ted recruit historical figures and going to hell in the past, this time it’s actually about the music.  For three movies, we are told that Wyld Stallions will unite the world in music.  Only in the third is the music actually a significant part of the movie.  It’s fun seeing Hendrix jam with Mozart despite the language (and time) barrier. 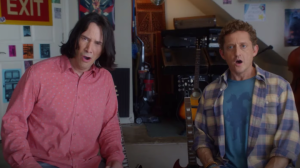 Spoilers from this point.  Bill & Ted screw up worse and worse the further they go.  Their future selves try to trick their past selves into stealing a song from Dave Grohl, which backfires and ends up with future Bill and future Ted in the slammer.  Their princesses abandon them.  Dennis lasers everybody to death (including himself) and they all end up in a familiar landscape:  Hell.  But that’s OK.  Turns out that Bill & Ted’s former bassist lives nearby.  Yes, it’s William Sadler as Death, who we learn quit Wyld Stallions to go solo years ago.  (We couldn’t get George Carlin back, but we did get William Sadler, and that’s just awesome.)  The clock ticks on and all seems lost, but don’t worry — Kid Cudi shows up to help with the quantum mathematics.

But what about the song?  As Mr. Holland’s Opus proved adequately, when you build up a piece of music in the audience’s mind, nothing will meet that expectation.  And as Dave Grohl is well aware “this is not the greatest song in the world, this is just a tribute.”  Given that no piece of music will ever satisfy an audience when you build it up as “the song that will save the universe”, this movie took an interesting turn.  It is revealed that the song itself wasn’t as important as getting everyone in the world to play along simultaneously.  It’s like a big “I’d like to buy the world a Coke and sing in harmony” situation.  And our heroes have a time machine, so they can make sure they get the message (and an instrument to play along) out to everyone in the world.  Don’t think about it the time travel stuff too hard!

Keanu Reeves, and Alex Winter in particular, are so much fun to revisit as these characters.  Keanu is a little more laid back, but Bill & Ted are in their late 40s (while the actors are in their 50s).  They’re not as enthusiastic as they once were.  But they are still Bill & Ted, bonded at the hip, and going to couples therapy as a quartet with their princesses.

Because of its focus on the music, Bill & Ted 3 surpasses the previous two movies.  There’s little “wheedly-wheedly” air guitar and shenanigans.  They don’t run around saying “excellent” and “bogus” all the time.  The endgame of Bill & Ted has always been that one day they would save the world with their music, yet the previous two movies didn’t focus on music.  The first one was about collecting historical figures to pass the highschool history exam.  A fun and fresh premise indeed.  The second went dark, having them assassinated by future robots and journeying through hell.  The third combines the two ideas, but this time with historical musicians.  Rock, jazz, classical, and I had to look up Ling Lun!

You get the sense that Keanu and Alex realized that there is a certain innocence to Bill & Ted that requires younger characters.  Their daughters (played by Samara Weaving – niece of Hugo, and Brigette Lundy-Pain) fill those roles and do it, pardon the pun, excellently.  You need that wide-eyed excitement.  Bill & Ted have already travelled through time, met Socrates and did it all twice — they have nothing to be wide-eyed about.  To them it’s old hat, even ending up in Hell one more time.

The Bill & Ted movies are, objectively, dumb movies.  The two lead characters are, objectively, dumb.  But dumb can be classic, as Stooge aficionados know, and updating a classic is really difficult to do.  Just ask the Farrelly brothers.  Ted Theodore Logan and Bill S. Preston, Esquire managed to have a third adventure appropriate to their ages, while finally saving the world as George Carlin promised they would.  Nothing new added to the stew.  By finally focusing on the music, potential is fulfilled.

* Their experimental opus “That Which Binds Us Through Time: The Chemical, Physical and Biological Nature of Love; an Exploration of The Meaning of Meaning, Part 1” is not a hit.