“If You Could Only See” the reasons I own this CD.

Nobody buys a CD like Hit Zone 4 and likes every single track.  Stuff like this was popular because it gave kids an easy way to get a bunch of one hit wonders from the rock and pop genres without buying the albums.  There were also big names on board.  CDs like this were always on the charts, year ’round.  Today, kids just go to Youtube or Spotify.  But even a curmudgeon like me can find a few songs here to enjoy.

In particular, I bought this CD for a rare non-album version of “If You Could Only See” by the underrated Tonic.  This was their big hit, and the version on Hit Zone 4 is an alternate recording with a slightly new arrangement.  The liner notes lie and say it’s from their album Lemon Parade; this is obviously false.  In fact there’s no obvious way to tell it’s a unique version without listening to it.

Other decent music:  I have a soft spot for Chantal Kreviazuk’s ballad “Surrounded”.  Jann Arden too, and “The Sound Of” is one of her very best tracks.  I’ve seen Jann live, and she did a fantastic show with stories and jokes and unforgettable songs.  Then there’s fellow Canuck Bryan Adams, with his excellent acoustic rocker “Back To You”, from his Unplugged album.  Few Adams albums from the 90s on are worth a full listen.  Unplugged is.  “Back To You” was the “new” track used as a single.  It’s bright and alive in a way that Adams’ later music is not.  Fiona Apple’s dusky “Criminal” is classic, of course.  Finally, who doesn’t still love The Mighty Mighty Bosstones “The Impression That I Get”?  They were one band that truly deserved their hit.  They’d been at it for so long, and this song is really just that one perfect tune for the right time.

Unless you were a kid in the 90s, you’ll find yourself skipping over ‘N Sync, Backstreet Boys, All Saints, Robyn, and even Hanson.  Young Hanson can be tough to listen to.  I mean, they were kids, making music that kids liked.  It couldn’t really be helped.  I also find myself breezing past Mase, The Verve Pipe and Imani Coppola.  One hit wonders, right?  Shawn Colvin’s OK, but Boyz II Men can fuck right off.  “4 Seasons of Loneliness”?  Maybe because you guys are all wearing matching sweaters.  You can’t win friends with sweaters.

Hit Zone 4 is the kind of thing you buy in a bargain bin if you find it for $1.99.  These were once front racked at the old Record Store for $16.99 because they had so many hits from the late 90s.  It really was great value, because really, are you going to listen to Imani Coppola’s whole CD?  Be honest! 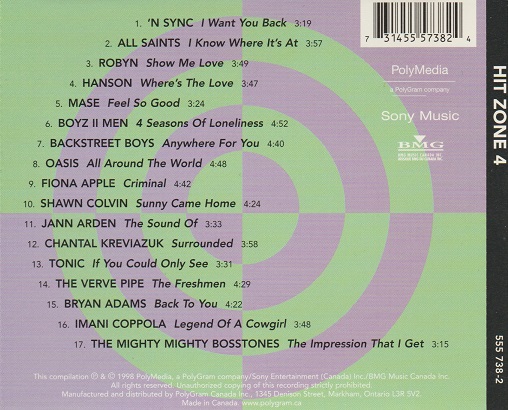