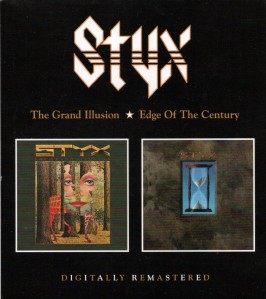 Kilroy Was Here seemed to be the end of Styx.  Although the album went platinum, it was also divisive.  The band were fractured and the tour was difficult.  Members did not enjoy playing characters on stage.  Was this a rock band or was it Broadway?  Styx split up in ’84, with members embarking on new projects.  Dennis DeYoung did moderately well with his solo debut Desert Moon, and Tommy Shaw had a fairly big hit with Girls With Guns.  James “JY” Young went in another direction on his own City Slicker album with Jan Hammer.  For all intents and purposes, Styx spent the second half of the 80s completely defunct.

In 1990 two interesting things occurred.  First, Tommy Shaw formed a supergroup with Jack Blades (Night Ranger) and Ted Nugent called Damn Yankees.  They came out of the gates with a surprising self-titled hit album that didn’t particularly sound like Styx, Night Ranger or Ted Nugent.  But it spawned a couple hit singles and went double platinum.  When Styx reunited at the same time, it was without Tommy Shaw.  Styx would never record with the classic lineup again.

The Styx reunion we got in 1990 was, frankly, not the Styx reunion we deserved.  A new guitarist, songwriter and singer would be needed and he arrived in the form of solo artist Glen Burtnik.  He was only slightly younger than Shaw, but brought in a modern edge.  He was able to sing Tommy’s high parts, and could write.  The first single, “Love is the Ritual”, was written by Burtnik and partner Plinky Giglio with no other members of Styx contributing.  Clearly, they were trying to turn a page and appeal to a new younger generation, and make people forget all about “Mr. Roboto”, or that dreaded “progressive rock” tag.

The new album was titled Edge of the Century and produced by Dennis, now in control of Styx.  Even so, “Love is the Ritual” sounds like a Winger reject, with full-on Beau Hill production.  You’d never guess it was Styx, and one suspects this is why it was chosen as the lead single.  It was also the first track on the album.

Leading the new album with a song featuring a new unfamiliar singer was a risky move.  The turgid track is a clone of Winger’s “Can’t Get Enuff” and features some stinky synth bass.  The faux-funk of the rhythm track is unpalatable, and only a hint of Dennis DeYoung on backing vocals indicates that this song has anything to do with Styx.  They’re barely in their own music video.  Almost as bad are the cringey lyrics.

The song that should have opened the album, “Show Me the Way”, was a legitimate hit.  A church-like ballad with soaring chorus, it struck a chord with Americans during the first Gulf War.  It has the sound of a true Styx classic and fits well with past ballads.  Dennis is a remarkable songwriter and the chorus on this track is just legendary.

Edge of the Century tends to be remembered for “Show Me the Way”, but good Styx-like material is still buried within.  Burtnik’s back on the title track, but this infectious hard rocker does sound more like Styx.  It fits that slot like a classic Tommy Shaw rocker.  The wicked riff is as memorable as the catchy chorus.

The songs alternate from Glen to Dennis, and DeYoung’s ballad “Love At First Sight” is a traditional 80s power ballad with chiming keyboards.  It sounds exactly like every other power ballad from 1990, but at least it is a good one.  It was the third single and did OK on the charts.

One mark of a good Styx album is a decent acoustic song, and Glen Burtnik has “All In a Day’s Work” for that necessity.  It’s just acoustic guitar, vocals, some keyboards and Dennis’ accordion.  Very Styxian, especially when they sing together.

The second side opens with a traditional rock n’ roller, “Not Dead Yet”, which is a song by a chicago artist named Ralph Covert, sung by Dennis.  It’s DeYoung’s first rocker on the album, and it’s leather jacket cool.  Burtnik’s back on “World Tonite”, the cheesiest song on the album.  This generic rocker with it’s “Girls wanna dance, boys wanna fight” lyric is pretty awful.  Parts of it verge on rap.  Its only saving grace is the harmonica that periodically blasts through.  In no universe would anybody say “That sounds like Styx to me.”

Dennis is really good at ballads, and “Carrie Ann” is surprisingly strong.  Like another “Babe”, it has a strong chorus and memorable hooks.  Did “Babe” need a sequel?  It matters not; “Carrie Ann” is pretty good for what it is.  We’ve had a few ballads now, and an acoustic song, but have you noticed what is missing so far?  James “JY” Young.  He does not check in until the second-to-last tune, “Homewrecker”.  It is a Quiet Riot-like rocker (similar to “Run For Cover”), and unsurprisingly the hardest rocker on the album.  JY was overdue.  That fact that you can really only feel his presence on this one track is one of the major weaknesses to Edge of the Century.  However, they try to make up for it with with a smokin’ guitar solo, and a killer keyboard break from Dennis too.  “Homewrecker” may be derivative but JY hasn’t rocked out this hard on a Styx album since “Half-Penny, Two-Penny” back in ’81.  It’s over all too soon.

Edge of the Century is still missing one key Styx ingredient, and they save it for last:  something big and pompous and overblown.  That is “Back to Chicago”.  Air-shaking blasts of horns and clarinet accompany a huge broadway-ready chorus.  It’s hard to imagine when you start this album on “Love is the Ritual” that you will end it on something as different as “Back to Chicago”.  Styx albums albums are often diverse, with heavy riff rockers butting up against pretentious set pieces.  But they’ve always been cohesive.  By the end of Edge of the Century, any thought of cohesiveness are out the window.  Although the same five guys plays on all 10 songs, it sounds like two or three separate bands.

Edge of the Century is like a lost Styx album.  The band split after a short tour, with the album going Gold but no further.  Due to the sad passing of drummer John Panozzo, this lineup could never exist again.  Styx reunited in 1995 (with Shaw), but they stopped playing “Show Me the Way” when Dennis was let go in 1999.  “Love is the Ritual” continued to be played live when Burtnik was in the band again (on bass filling in for Chuck Panozzo) from 1999-2003.

Fortunately, the album can be acquired remastered in a fine reissue on BGO Records, paired in a 2 CD set with The Grand Illusion.  The reissue includes the original lyrics and liner notes, along with an essay detailing Styx history.

In 1990, Styx reunited — but without Tommy Shaw. Busy with Damn Yankees, Shaw would have to be replaced. And, let’s face it, it always seemed like most of the Styx friction was between Tommy Shaw and Dennis DeYoung. Needing someone to fill Tommy’s “Shooz”, they recruited young singer/songwriter/guitarist Glen Burtnik.

The DeYoung/Young/Burtnik/Panozzo/Panozzo lineup produced one album, Edge of the Century. It was heralded by lead single “Love is the Ritual”, a decidedly un-Styx-like attempt to break into the 1990 rock market after a seven year absence.

You could mistake it for Winger. With Burtnik front and center, Styx take a back seat in their own music video. Dennis is rarely seen, only needed when there’s a “Hey!” backing vocal.  Glen fronts the band with microphone in hand — no guitar. If ever there was a music video built to appeal to the young while trying to hide the age or identity of the band, it is “Love is the Ritual”. The clip is padded out with shots of women and a Fabio-like dude. Truly an awful video, and an embarrassing attempt to grab the brass ring one more time.