Forget all those books by the mega stars like Slash and Sammy Hagar that have come out in recent years. Those books have one thing in common — they were written (or co-written, anyway) by guys who are rock superstars! Megastars! It’s hard for me as a reader to relate to a guy who hasn’t had to hold down a job in 30 years. Not that there’s anything wrong with stardom, it’s just an observation.  I can’t relate to the human beings.   Not so with this book!

Brian Vollmer, lead vocalist of the hardest working band in Canada (that would be Helix), comes across as a pretty regular guy.  (I’ve met him a number of times, and he’s about as regular as anybody you’d know.)  Yes, he’s traveled the world in a rock band and played for thousands of people, but at the end of the day the book is something I can still relate to. Through crappy jobs in crappy convenience stores, crappy apartments, getting mugged, it doesn’t seem like a rock star’s life.  There are parallels in the story similar to other bands such as Anvil (another hard-working Canadian band). While Vollmer always manages to scrape by and continue to Rock Us, nothing comes easy.  Incredibly through it all Brian Vollmer never really stopped being an artist.  He seemed to always keep music, and Helix in his life even after dozens of lineup changes and band members.  (Approximately 35 people have been in Helix since 1974.  The newest member is Cambridge’s Chris Julke, replacing John Claus.)

From humble beginnings in Listowel Ontario to playing in Sweden, England and Trinidad, Vollmer’s tome has plenty of rock and roll stories. As one of the first Canadian bands to release independent albums in the 1970’s, he was a bit of a pioneer. Gimme An R! is loaded with rock star encounters one after the other, from Eddie Van Halen (on stage!) to Gene Simmons.  Vollmer remains himself through it all, even after Helix signed their big deal with Capitol and released “Rock You”.  The tragic death of primary co-writer Paul Hackman nearly derailed the band.  Even after the departures of longtime partners Brent Doerner, Fritz Hinz, and finally Daryl Gray, Brian kept going.  He kept the Helix name alive, finding success on the internet which was a brand new way for him to make contact, and sell albums directly to his fans.  Then, a little TV show called Trailer Park Boys helped expose Helix to a new audience.

Included between the covers are dozens of black and white photos of the band over the years.  From small-town Ontario to meeting superstars like Richard Pryor and Robin Williams, it’s a pretty cool collection of snaps. Unfortunately while reading I found myself distracted by spelling errors — “Atlantis Morissette” for example.  I would like to see a second printing that corrects these mistakes.  (A new chapter on the last decade would be cool too Brian!)

Vollmer’s prose is not frilly or poetic, but it’s conversational and descriptive.  There’s no ghost writer, so the pictures that Brian paints of all those seedy bars in the dead of winter come straight from his memory to the page.  He’s a great storyteller.  The bottom line is that the story of Helix keeps you hooked.  I’ve had friends come over and pick up the book, and they just get entranced. It’s a really different side of the rock and roll tales.  It shows what old fashioned determination and hard work can accomplish.

I have to knock off half a star for the spelling errors. It’s just one of those pet peeves — nothing personal, Brian!  I do highly recommend it Gimme An R! to rock fans world wide who’d like a different, more humble angle on the whole rock star thing. 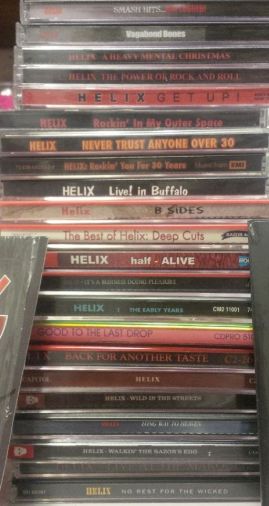 September 7, 2012:  Once again, things are getting exciting on Planet Helix.  If the new single / video “All I Want For Christmas is the Leafs to Win the Cup” wasn’t enough, there’s also the new anthology, Best Of 1983-2012.

Lead vocalist and founding member of Helix, Brian Vollmer talked to us about these releases, some special upcoming dates, and a lot more.

The new single seems to be off to a good start, according to the song’s co-writer, Sean Kelly.  Brian filled us in.

“Sean’s from North Bay [Ontario], and he told me we’re getting airplay up in North Bay on that song.”  The video is also doing well:  “We’re up over 5000 hits now, and we’re hoping that the video goes viral.  It’s early in the season…there might not even be an NHL season this year!”

Oh Brian, don’t get me started on Gary Bettman!

The collector in me was excited about the vinyl release of the single.  It’s also going to be on the anthology CD, but the vinyl is designed for collectors in mind.

“I had initially wanted to do vinyl on the Christmas album [A Heavy Mental Christmas], but when we wrote this song, I thought that we’d do vinyl because it’s a collector’s item.  It’s kind of a novelty type of thing, and I think that it’ll appeal to not only Helix fans but also Toronto Maple Leafs fans.  They might like the vinyl just to have in the rec room up in the bar.  We sell it for $19.99 so it makes a great stocking stuffer for people.

“We did it on green vinyl too, to fit in with the season somewhat, and when we go through that pressing we’ll probably change colours.”  Just FYI Brian:  my wife, Mrs. LeBrain, is really hoping for blue!

“We’ve been trying to write a Leafs song for a couple years,” adds Brian.  “We had the working title of ‘I’m Bleeding Blue & White Tonight’.  And we never quite got the song together.  And then we did a radio session, where we were finishing off [new song]  ‘Axe to Grind’, which is also on the anthology album.”  Brian was then supposed to meet up with Travis Wood, of the band Whosarmy (from the TV show Cover Me Canada, which Brian also guested on incidentally).

“I didn’t want to go too early, and just sit around at the restaraunt.  So we started fooling around and all of a sudden, within a couple of minutes we wrote ‘All I Want For Christmas is the Leafs to Win the Cup’.  The song was recorded within two weeks.”  The hilarious video was done right after that.  I forgot to ask Brian if any Habs fans are offended!

You can buy the single on the green vinyl in a bundle with a T-shirt and the new CD, Best Of 1983-2012.  “The Best Of album I just put out has a lot of tracks that you wouldn’t normally hear [on other best of albums] by Helix.  Stuff like ‘Animal Inside’ off the Vagabond Bones  album.  ‘Get Up’ and ‘Fill Your Head With Rock’ from The Power of Rock and Roll album.”

Coinciding with these releases is the forthcoming Heavy Mental Christmas tour.

“Yes, we just added another date in Cornwall.  We have seven dates, mostly through Masonic temples, legions, moose halls, through southern Ontario.  It’s a multi-media show.  We’re taking out screens, so there’s some video segues between songs, other times there’s still pictures with Christmas themes…some of the cameras that are places strategically around stage are broadcasting whatever member might be doing a solo during the song.”

You may want to consider getting your tickets now, as these shows are special indeed, and feature a new lineup.  Not only will you meet the new Helix guitarist, John Claus, but “also Sarah Smith.  Sarah Smith is a great London [Ontario] artist, she’s got two CDs out now under her belt, she’s a great addition to the show.  Just a smiling, very talented person.  She’s on with us instead of Kaleb [“Duckman” Duck, guitars].  Kaleb really didn’t want to do Christmas songs!  Initially, we were going to go with one guitar player, and then I thought of Sarah.”

This turned out to be a good decision, according to Brian:

“I always walk out of our Christmas practices with a big smile on my face.  I love playing the material, and it’s really fun with this group of people, to do these songs.  I wouldn’t want somebody to do any of my projects that wasn’t totally into it.

“It’s a labour of love.  We’ve been working on this show over a year now.”

“Setting up the website, and the tickets, and the halls, and putting together the show, learning the show, and getting the multi-media involved.”  But it is truly a labour of love, and you can tell by the amount of work that Brian and the band has put in so far.

I mentioned new guitar player John Claus.  As previously reported, longtime axeman Brent Doerner will be leaving Helix at the end of September 2012.  Brian helps shed some light on this lineup change, and what bringing in a new member does for the band.

“We have two more dates with Brent at the end of this month.  One’s at the Rockpile in Toronto, the other’s at the Masonic Temple in Stratford.  That’s a multi-media show as well.  Tickets are going fast for that one, I think a lot of people want to come and see Brent before he goes.

“Brent’s been in the band since about 1975.  No hard feelings with him leaving at all.  He just wants to pursue video production, and in fact, Brent will still be involved on a creative level  with the band, helping us do our videos.

“I tell everyone that Brent, when he initially came back to the fold, he was only going to be here for six months, and he ended up staying three and a half years!  He definitely was better than his word, and stayed for a long time.  So I’m really grateful to him for that.”

On John Claus, who will replace Brent:

“He plays piano and guitar.  He sings, so he’s a great addition to the band.  Nice guy, great personlity.  Whenever we hire new people in the band, we don’t want any ego trips.  So, to get someone who has a nice personality and just a good human being is a nice thing to have.”  John will join the band completed by longtime members Daryl Gray and Greg “Fritz” Hinz, on bass and drums respectively.

The piano aspect will come into play for future shows.  Brian reveals that he and John will probably perform “Dream On”, the Nazareth cover, from Helix’s Wild in the Streets album, as a duo during upcoming Helix concerts.  “And the Christmas shows, we’re doing ‘Hallelujah'” says Brian of another piano-based cover to look forward to!

It’s great to see Helix continue forward through the years.  Brian has worked hard, starting in the 1970’s as an indi artist, and now today continuing down that path.  Once again the band is behind their own music releases, selling it themselves.  Brian has nothing but praise for the team he’s surrounded himself with in recent years.

“I write with Sean [Kelly] nowadays, he’s a great writer, nice person to work with.  Aaron Murray is my producer, he studied from Danny Broadback, who won a Juno for Engineering.  And Danny studied with Jack Richardson, who as you know produced Alice Cooper and the Guess Who, and all sorts of people.”  Brian adds, “Moe Berg [The Pursuit of Happiness] sometimes comes in to write with us, Sean and I.”

Thanks to Brian Vollmer for updating us on all the new happenings on Planet Helix!  Try to get out to see the Heavy Mental Christmas tour, and get tickets while you can! 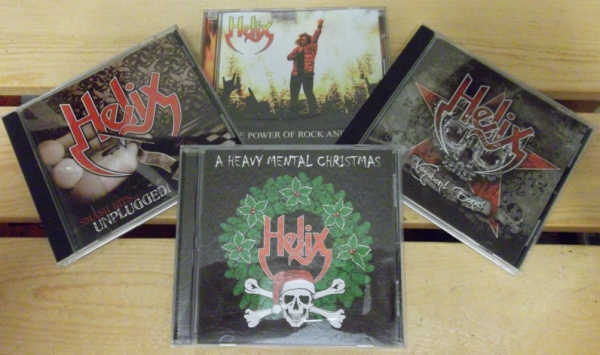 Buy the new Helix single, album, and other stuff:

Audio of our chat below!