1989’s slasher film Shocker was Wes Craven’s attempt to introduce a new character to the pantheon of horror.  Unfortunately, Horace Pinker and the movie he rode in on were quickly forgotten.  Also forgotten was the heavy metal soundtrack, so let’s have a gander and see what you may have missed.

Ever heard of The Dudes of Wrath?  This temporary “supergroup” consisted of various members from track to track, but the best song they did was “Shocker” itself.  With lead vocals by Paul Stanley and Desmond Child, it’s a must-have for Kiss maniacs.  If that’s not enough, Vivian Campbell, Tommy Lee and Rudy Sarzo also play on it.  It’s like a collision of some of those bands — Kiss, Dio, Motley.  The anthemic outro will slay you.

Desmond’s writing is all over this album, and he co-wrote a track with Alice Cooper that ended up being recorded by Iggy Pop called “Love Transfusion”.  Sub out the saxophone for guitars and you could easily imagine this being a Trash B-side.   In fact I wouldn’t be surprised at all if the backing track is from the Cooper sessions, because this sounds exactly like an Alice Cooper song with Iggy Pop overdubbed.  All the musicians are guys from the Trash album.  Do the math.

It’s hard to imagine a weirder team up than Desmond Child and Megadeth.  Dave Mustaine was deep into the powders at the time, and he recorded “No More Mr. Nice Guy” with a three piece Megadeth.  The late Nick Menza had joined the band already, but Marty Friedman was yet to be hired.   Most Megadeth fans are familiar with this track, since it was re-released on their Hidden Treasures EP.  Certainly not the band’s finest moment.

Paul Stanley reappears in a writing capacity on “Sword and Stone”, performed by Bonfire.   Paul wrote it for Kiss’ Crazy Nights LP with Desmond Child and Bruce Kulick.  If it had been on Crazy Nights, it might well have been the best tune on there.  Paul’s demo has yet to be released in an official capacity, but it’s been heavily bootlegged.  Bonfire’s version is fantastic, but it only makes me hungry for a fully recorded and mixed Kiss version.  One day….

Another version of The Dudes of Wrath appear on side two, this time with Alice Cooper on vocals.  “Shockdance” sounds like little more than a slowed down variation of the “Shocker” riff, with Alice and actor Mitch Pileggi rapping over it. Just terrible stuff, actually. Thankfully Desmond redeemed it a little bit with the song he wrong with Dangerous Toys, “Demon Bell”. Like Guns N’ Roses galvanized and electroplated, “Demon Bell” slays.

Voodoo X were the band of Jean Beauvoir, who Kiss fans know from his many co-writes and guest appearances on their records. He only made one record as Voodoo X, and his song “The Awakening” is damn fine indeed. At first you’re thinking, “Oh it’s just another crap ballad”. Then a riff kicks in, and it blasts right off. It’s a bit like 80’s Kiss meets Top Gun. The last band up is Dead On, pretty pedestrian thrash metal, and one of the few songs without any involvement of Desmond Child. The angry elf vocals are hilarious, but the song is almost a parody of bad metal. The album ends with a reprise of the title track “Shocker” from the first side. Basically what this means is that you get to hear Paul Stanley singing for another two or three minutes, when he was really able to hit some seriously high notes. Cool!

Shocker isn’t the greatest soundtrack, but it’s a hell of a lot better than the movie that spawned it!

The helpful back cover doesn’t even tell you who’s on it. 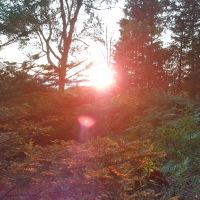