In most timelines and biographies, they’ll have you believe that the original lineup of Loudness had already peaked by 1987 and were creatively and commercially going downhill.  While the commercial side of things was out of their control, creatively Loudness were still writing great songs.  Though they did have one more EP in them, Hurricane Eyes is the final album of the original Minoru Niihara era of Loudness.  It was recorded by Kiss and Jimi Hendrix producer Eddie Kramer with one track by Andy Johns.  Though not as heavy or complex as Disillusion or noteworthy as Thunder in the East, it is thoroughly enjoyable from side A to side B.  The commercial bent is obvious on some songs, but it doesn’t really blunt the impact.

Like most Loudness albums from the classic era, the band recorded lyrics in both English and Japanese and both versions of the album are included in this luxurious 5 CD box set.  In Japan, the Loudness catalogue has been treated reverently but this is the beefiest of all their deluxe sets.  Along with both versions of Hurricane Eyes (including minor musical differences), the set includes a disc of album demos, and another disc of alternate mixes and rhythm tracks.  The fifth CD is a live set from the Hammersmith Odeon from 1986.  Like any set of this nature, you’ll be listening to the same songs in four or five versions, but fortunately they stand up to such immersion.

Though Hurricane Eyes represents a peak effort to break into the American market, and some songs verge on Dokken homages, it’s a strong album loaded with hooks and enviable guitar theatrics & riffs.  And regardless of some of the more radio-friendly material, it also boasts the thrash-like “S.D.I.”, a speed metal riff-fest that remained in the Loudness set list long after after Minoru was let go.  The technical playing on “S.D.I.” is outstanding, and that’s laid bare for you to hear in the instrumental mix on Disc 4.  The guitar solo is pure Eddie meets Yngwie.  “S.D.I.” opens the English version of the album, but closes the Japanese.  It works excellently in either configuration.

The English album continues with “This Lonely Heart”, a hook-laden hard rocker anchored by a solid riff and soaring chorus.  Lynch and Dokken must have been jealous they didn’t write it because it’s right up their alley.  The album title Hurricane Eyes comes from a lyric in “This Lonely Heart” but what you’ll remember mostly is that indelible chorus.  Keyboards are poured into “Rock ‘N Roll Gypsy”, an obvious choice for a radio single.  Though it didn’t hit the charts you can certainly hear the effort in it.  On the Japanese version of the track, the keyboards are present but not mixed in as prominently.  It’s the better of the two mixes, with more of that Akira Takasaki guitar up front.

“In My Dreams” is the first power ballad, with focus on the power part.  Akari has some sweet anthemic guitar melodies in his pocket for this very Scorpions-sounding track.  This gives way to another blitz of a song, though not as over the top as “S.D.I.” was.  “Take Me Home” has similar urgency but more deliberate pace.  “Strike of the Sword” is in similar metal territory with a fab Akari riff.  The vocal melodies sound a little disconnected from the song though.

Don Dokken’s turf is revisited on “Rock This Way”, a mid-tempo ditty within hit territory.  You could imagine this being written for the concert stage, so you can have a singalong chorus — “Rock this way!”  Picking up the pace, “In This World Beyond” is a bit more complex though retaining an insanely cool chorus.  The Loudness guys really developed an absurdly good chorus-writing ability by this point!  But stick around to be strafed out of the sky by Akira’s machine-gun solo.  “Hungry Hunter” returns us to mid-tempo rock ground, though it’s not their most remarkable song. 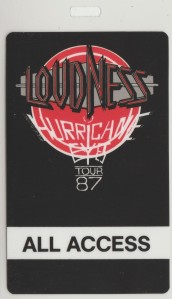 The American album ends with “So Lonely”, a re-recording of “Ares’ Lament” from 1984’s Disillusion, also in the closing position.  Disillusion didn’t get a lot of attention outside Japan, and “Ares’ Lament” was a clear highlight.  Though the structure is essentially the same, “So Lonely” is a tamed version” of the more traditional metal original.  Keyboards are added, replacing the Akira-shred of the original.  The chorus is beefed up and placed front-and-center.  It suits Hurricane Eyes and though it’s merely a blunted version, it’s still quite excellent.  It’s a demonstration of how you can take a song and tweak it into a different direction.

“So Lonely” isn’t present on the demo CD, presumably because they didn’t need to demo their own classic tune.  Instead there are two tracks that didn’t make the album, but would be finished in the future:  “Jealousy” and “Love Toys”.  The 1988 Jealousy EP would see the first track released (but only in Japan).  This is the most Dokken of all the songs, with one of those concrete riffs that George Lynch was prone to writing with ease.  Maybe when Dokken broke up, Don should have given Akira Takasaki a phone call.  The more frantic and metal “Love Toys” was revisited in 1991 with new lead singer Mike Vescera, for the On The Prowl album of re-recordings.  Both tracks had potential in the unfinished demo stage.  In fact all the Loudness demos on this disc are nearly album-ready.  They’re rougher but also appealing for that same reason.

Disc 4, Behind the Hurricane Eyes is a hodgepodge of alternate mixes and rhythm tracks.  The eight rhythm tracks (essentially mixes without vocals and solos) include another version of “Love Toys”.  The mercilessly tight rhythm section of Munetaka Huguchi and Masayoshi Yamashita come to the fore on these tracks, as does Akira Takasaki as the riffmaster.  “S.D.I.” is present on this CD twice, in rhythm track form and as a straight instrumental.  You will be getting plenty of “S.D.I.” in this box set!  You’ll also enjoy the brighter “Top 40 Mix” of “Rock This Way”, a really good remix that sounds perfect for the hits of the era.  A mix of “So Lonely” with an earlier fade-out isn’t that interesting, but still desired by the collector.  “Hungry Hunter” and “This Lonely Heart” are present in “old mix” and “rough mix” respectively.  Differences are minor.

You could find yourself with a bit of ear fatigue after hearing so many versions of the same songs.  Fortunately Disc 5 is a live set from the previous tour with none of the same songs.  Buckle up.  Opening for Saxon at the Hammersmith Odeon, Loudness went straight into “Crazy Doctor” from Disillusion after a glowing intro from Biff Byford.  It’s right to the throat from the start and this CD has their full set.  “1000 Eyes” from Lightning Strikes follows, the album for which they were touring.  Loudness could have used some backing vocals live to beef up the chorus, but Minoru does a remarkable job on his own, givin’ ‘er all over the place.  It’s also cool to hear Akira go from rhythm to lead so effortlessly live.

There is honestly something charming about someone who isn’t a native English speaker really giving their all to talk to an audience in English.  Minoru is clearly happy to be in “London rock and roll city!” and the audience lets him know he’s welcome.  The awesome “Dark Desire”, also from Lightning Strikes, follows and Akira lays down a mesmerising solo.  Then a long dramatic intro opens “Ashes in the Sky / Shadows of War”, a highpoint of an already great set.

The big Loudness single in 1986 was “Let It Go“, a truly special pop metal song.  This version opening for Saxon at the Hammersmith might be the best live recording if not the most energetic.  Afterwards the late Munetaka Higuchi takes a drum solo (presumably to give Minoru’s voice a rest after this workout!).  There’s a brief segue into Beethoven’s 5th Symphony, and Minoru introduces the band.  That pumps up the crowd for Loudness’ biggest hit “Crazy Nights” complete with crowd singalong.  “MZA!”  After smoking through this one, Akira takes a blistering solo break.  The set closes with “Speed” from their third album The Law of Devil’s Land.  They saved the most aggressive song for last.  Couldn’t let Saxon have it too easy, right?

Though hard to get, these Loudness deluxe editions from Japan are really beautiful to hold in hand.  The thick booklet is printed on glossy paper, and though the liner notes are in Japanese, lyrics are provided in both languages.  The rest of the booklet is stuffed full of tour photographs whose only language is rock and roll.  Loudness certainly looked the part.  The set also includes a little reproduction backstage pass, but the main feature is the music.  Diehards are going to love it.