It was the second of April, 1973. EMI released two Beatles compilations simultaneously, the “greatest hits” to end all greatest hits. They were double albums, split up by era. Hence the titles 1962-1966, and 1967-1970.  Nobody refers to them as such.  Due to their packaging, fans simply call them the Red and the Blue albums. 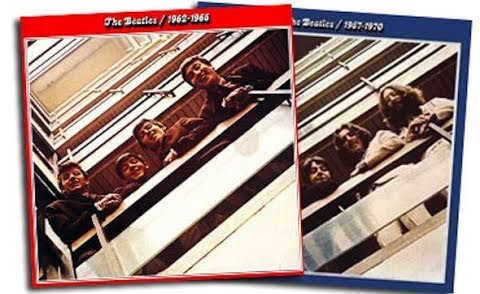 This story is not about those albums.

Of course, some cheeky bootlegger used a similar gimmick when compiling up all of Oasis’ B-sides and non-album tracks back in the late 1990s.  The earliest rarities were lumped together on The Red Album 93-94.  Everything beyond was on The Blue Album 94-96.  The CDs had matching artwork and back covers that boasted “A complete and global anthology of non-album tracks”.  And for the period, that seems to be generally true!

When I first got into Oasis, they already had plenty of singles and B-sides out there.  Collecting them all was an intimidating prospect.  Oasis singles were always chock loaded with quality unreleased songs.  Unlike most artists, Oasis’ Noel Gallagher insisted that their B-sides were as good as album tracks.  And they were — often better.   My Record Store cohort T-Rev had a complete collection of singles, but was still missing a few other rare songs.  While at a record show, we found the Oasis Red and Blue CDs.  At $30 a pop they were still cheaper than trying to collect all the Oasis singles, with the added bonus of the songs T-Rev was missing!  They were recorded for him immediately of course.

T-Rev preferred the Creation Records singles, which were the UK printings.  My bootlegs were interesting to him, but not something he would spend money on.  When I moved into his apartment for a few months in ’98, he could listen to my bootlegs whenever he wanted to anyway.  He knew I was fussy about the handling of my music, and he was as well, so we could easily trust each other with our collections.  It was a very easy situation because we both had total respect for each other’s music.

The two songs he didn’t have (yet) were only available in two official capacities.  “Sad Song” was exclusive to the vinyl and Japanese versions of Definitely Maybe.  Similarly, “Bonehead’s Bank Holiday” was exclusive to the same formats of (What’s the Story) Morning Glory.  Neither of us had heard these songs before.  What a joy to find that they were as extraordinary as the rest of Oasis’ B-sides.

Several other rarities couldn’t  have been found just by collecting the regular Oasis CD singles.  A demo of “Cigarettes and Alcohol” came from somewhere else, likely a compilation.  The second version of “Fade Away” on the Blue Album with Noel singing was from a Warchild charity CD.  A demo of “Some Might Say”, and the Beatles cover “You’ve Got to Hide Your Love Away” (lead vocals by Noel) were only on Japanese CD singles.  These songs have since been reissued on official Oasis releases, but at the time, the value they added to these bootlegs was immense.

Still, a bootleg is never as good as an original.  Sound is a problem on a couple tracks.  “Up in the Sky”, “Sad Song” and “Whatever” have volume issues.  There are also cute track-listing errors.  “Round Are Way” is amusingly “corrected” to “Round Our Way”.

Oasis have done a commendable job of deluxe edition album reissues.  Their first three albums have all been given triple disc deluxe CD upgrades.  That renders the Red and the Blue bootlegs largely obsolete.  There is only one song on the Blue Album that can’t be found on one of the deluxe Oasis reissues, and that is “Fade Away”, the Warchild version.  It can, however, be found on the B-side to Oasis’ 1998 single “Don’t Go Away”.

There is some truly remarkable music on these CDs that make their occasional listening a recurring pleasure.  Even some of the primitive early material like “Alive” and “I Will Believe” have true spark.  By the time you get to the more polished side of Oasis, like “Whatever”, you’ve already been treated to a number of early Oasis classics.  Live and alternate versions of “Columbia”, “Bring it On Down”, “Up in the Sky”, and “Supersonic” represent the best of Oasis’ early material.  There is also the love-it-or-hate-it extended live workout of “I Am the Walrus”, all 8:20 of it.

At the time, circa 1997, it was easy to justify paying a combined $60 for these two albums.  T-Rev’s friend Paul “Geeza” thought they were pretty neat.  Geeza was from England, and he visited Canada in the summers.  T-Rev befriended him via the store.  When he was back in Canada, he came over to the apartment and looked over our awesome CD collections.  He was all over my Red and Blue albums.  I made sure Geeza knew how I liked to take care of my stuff.  He was respectful but teasing.

I had to go out.  When I got back, Geeza and T-Rev were gone, but a note was left behind.

It was from Geeza.  He teased that he took my Oasis CDs!

We lived in such a small place, they weren’t hard to find.  I think the Red Album was under my pillow.  The other CD took longer.  It was just in good fun.  I was probably pissed off for a minute or five, but who cares now?  I get the joke now.  Living with me must have been a little like living with Sheldon Cooper.

If a guy like Geeza, who was an absolutely madman for Oasis, was interested in the Red and Blue albums, maybe you should keep an eye open for them too.  Don’t pay $30 each, but consider adding these eye-catchers to your collection.

In November 1995 I was going through another breakup.   A big one — my first really serious girlfriend.  After some soul-searching, I thought this would be a good time to expand my horizons a bit, including musically.  By 1995, heavy metal music was not doing well.  It was on life support.  I wanted to check out other forms of rock and roll.

Working at the Record Store was the perfect environment for exploration.  Christmas 1995 featured a lot of store play for Oasis, who my co-working buddy T-Rev was a huge fan of.  Their new album (What’s the Story) Morning Glory? was beginning to take off.  It also appealed to a metal head like me.  It had a bit of everything:  rockers, ballads, and hooks.  It was a breath of fresh air, and loud as fuck.  Grunge bands had dominated and carried with them cloudy skies for the early 90s.  Oasis brought back fun aspects of rock and roll, and were right in synch with the Beatles resurgence happening at the same time with the Anthology series.  Oasis were almost a poor man’s Beatles.

I mean, they really wanted to be The Beatles, didn’t they?

I got to listen to the CD a lot in store, but we had a long waiting list for used copies. Because of that it would be a few months before I was able to get my own copy of Morning Glory.  T-Rev was on top of things, and had been collecting Oasis singles.  Oasis had a knack for B-sides, and often saved their best tunes for singles.  This was rare; in 1995 it was unheard of to save good songs for single B-sides.  Oasis didn’t care and did it anyway.  My first Oasis purchase was actually the CD single for “Don’t Look Back in Anger”.  T-Rev made sure it was stocked, even though we rarely stocked any singles.

So “Don’t Look Back in Anger” was my first Oasis purchase ever.  Buying a new copy of the single was more expensive than buying a used copy of the album, but that’s just the way it goes sometimes.  I dug the piano part ripped from John Lennon, and the bright melody with a hint of shade.  It really felt like an homage to the Beatles.  And the B-sides weren’t half bad either.  “Step Out” and “Underneath the Sky” were both top notch songs each with their own flavour.

Oasis quickly became my favourite “new” band in 1996.  That was the year that we opened up the branch of the Record Store that I managed.  I thought Oasis would be a good band for store play, and while some customers enjoyed that, no staff members did.

Oasis did their part to keep the single alive in the 1990s.  They issued box set after box set, re-releasing their old singles to those who missed them the first time.  The coolest of these were the “silver” and “gold” boxes.  They were plastic hard-shell box sets, one for the Definitely Maybe singles and one for Morning Glory.  They included an interview disc (same one in both boxes) and made it easy to get caught up on Oasis’ CD singles.

These were good times.  Though a breakup with a girl was the trigger, Oasis was the remedy.  Some songs, like “Cast No Shadow” had me wallowing in my own pity, but it was hard not to feel good things with “She’s Electric” and “Roll With It”.  For that reason, although there may be better Oasis albums, What’s the Story remains the most personal to me. 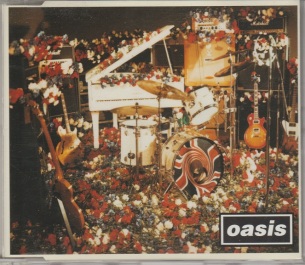 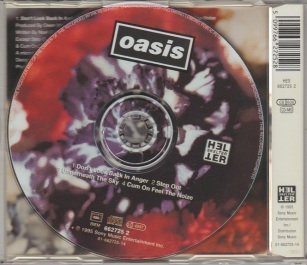 4) They had a member (Paul “Guigsy” McGuigan) who looked like Mr. Bean.

3) Noel frequently refers to Liam derisively as “our kid”. 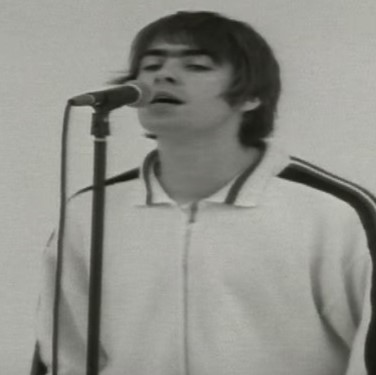 November/December 1995 was freakin’ busy.  We sold a lot of discs that Christmas.  What we didn’t do was listen to a lot of discs!  No; our boss really, really liked Don Henley and TLC.  He played them ad-nauseum.  Like on repeat three times in a row.  I’m not kidding about that.  I distinctly remember the repeat.  Here are the Top Three Discs I Had to Listen to Until My Ears Bled, December 1995.

Trevor on the other hand was introducing me to Oasis and managed to get a few cool discs into rotation:

We were also working with this new guy, Donnie, and we let him pick Dance Mix ’95 a few times.  Unfortunately, the Big Shiny Tunes series hadn’t begun yet.

Looking back, there were also a few albums that I found utterly disappointing that season.  They included:

All three were albums that I was solidly looking forward to, but largely disappointed me.  I never did buy Circus.  I own the other two, but only because I’m a completest (and I got AC/DC for $3).

Finally there were three albums that really got me through that season.  I had just been dumped by my first serious girlfriend and I was really angry about it.  Away from work (my boss didn’t want these ones played in the store) these three albums totally spoke to me that Christmas: 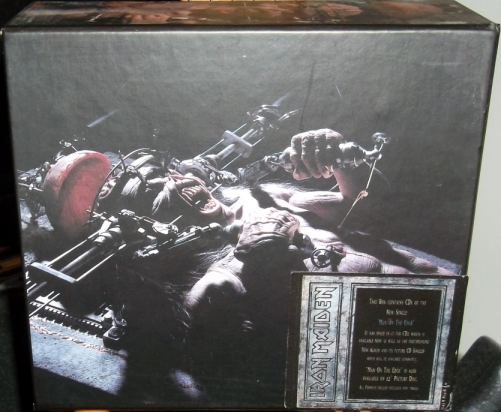 A long time ago, in a galaxy far, far away… 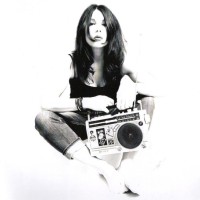 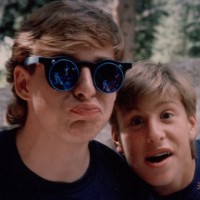 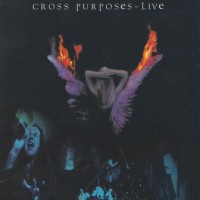 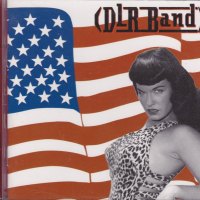 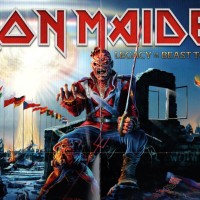