This baby can be expensive to acquire on CD, so let’s give ye olde cassette tape a spin.  It’s not been played in over 20 years.  This review is with fresh ears.

Kip Winger and Tony MacAlpine team up for “Space Truckin'”.  Tony goes his own way with the solos, innovating as he goes.  This is…pleasant?  There’s some kind of spark that’s missing, and when you’re playing “Space Truckin'” you need to put accelerant in the tank or you’ll fall flat.  Studio sterility has replaced spontaneity.

You gotta hope Glenn Hughes and John Norum can shock some life into “Stormbringer”.  They can!  Of the guitarists so far, John Norum (Europe) is the one who has the right feel for Deep Purple.  Glenn’s great, but doesn’t get to play bass, and here’s part of the problem.  You can hear that the backing band recorded the songs and then the featured players recorded their parts over them.  In a perfect world you’d have Glenn plotting the way on bass too, gelling with the backing band in a united groove.  That can’t happen when you record this way.

One guy who manages to inject his song with personality is Richie Kotzen.  He’s got the funky “Rat Bat Blue” and is granted both the lead vocals and guitars.  Yngwie returns on “Lazy” and he’s teamed with former Deep Purple singer and his own former bandmate, Joe Lynn Turner!  Yngwie plays appropriately on this strong but fairly bland track.  And that’s the cue to flip the tape over.

Paul Gilbert (Mr. Big) gets the vocal and guitar honours on “Maybe I’m a Leo”, which frankly is too slow and lacks groove.  Paul’s vocals, however, absolutely nail Gillan’s on the original.  Things turn stale quickly when it’s time for “Smoke on the Water”.  Russ Parish takes the guitar slot while Robert Mason (Lynch Mob/Warrant) sings.  Far more interesting is “Fireball” with Don Dokken and his future Dokken bandmate Reb Beach.  Don sounds a bit overwhelmed by the demanding song, but hits all the requisite notes.  The brilliant Jeff Scott Soto takes the driver’s seat on Mk I’s “Hush”.  This veteran vocalist (Yngwie/Journey/man more) makes mincemeat of your ears, absolutely killing it.  Soto is absolutely the vocal star on this album (one that includes Glenn Hughes)!  The final song goes to Tony Harnell (TNT) and Vinnie Moore (UFO).  They busy-up “Woman From Tokyo” a bit too much with unnecessary fills, but Moore does some really cool picking during the quiet section.

Though interesting, Smoke on the Water is far from an essential addition to your Purple collection.  There are already so many tributes out there.  The most interesting was T.M. Stevens’ Black Night which re-interpreted Deep Purple according to his New York sensibilities.  He had Joe Lynn Turner, Vinnie Moore and Richie Kotzen on his album too!  Then there is the more recent Re-Machined, featuring Iron Maiden, Metallica, and more Glenn Hughes.  Considering the CD prices these days, place Smoke on the Water fairly low on your priority lists. 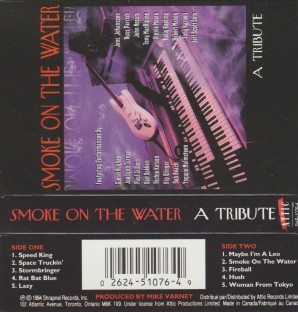