Less a story, more a show-and-tell.  I purchased this rare Metallica Fan Can via a staff member of mine.  Her name was Wraychel, and she had a Metallica Club membership.  When she told me that year’s Fan Can (#4) was available for pre-order, I asked her to get it for  me.  The Fan Cans were legendary!  I can’t remember what I paid.  It was a lot.

Don’t mind the dust, but enjoy the video.

It was a Wednesday in May, 1997.  Early afternoon.  This big, big dude with a shaved head walked into my store.  I greeted him, as I did all customers.  By all appearances he was perfectly normal.

“Hi there,” I said a few moments after he walked in.

“Do you have any Metallica box sets?” he replied, skipping the formalities.

I didn’t need to check inventory to know the answer.  The Metallica box set, Live Shit: Binge & Purge was huge.  It housed three VHS video tapes, 3 CDs in one jumbo “fat” case, a nice booklet, a “backstage pass”, and a stencil.

Legend has it that Peter the Rocker stenciled the “Metallica Guy” on the hood of his car. 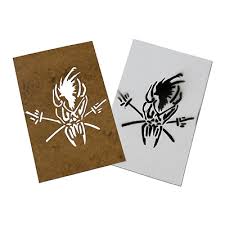 There were other things that you might have classified as a Metallica “box set” at the time, but it was 1997 and there weren’t many.  The first Fan Can was out (1996), and there was the vinyl-only The Good, The Bad and The Live: 6½ Anniversary EP Box Set that we wouldn’t have carried (no vinyl in 1997).

“No, I don’t have any.  I know for sure that one of our other stores had one a few days ago.  Want me to check if it’s still there?”

“Well, that depends on a lot of things.  It’ll depend on if it’s complete, condition…”

Cutting me off, he abruptly said, “Yeah, yeah…it’s brand new.  It’s my buddy’s.  He has lots of Metallica box sets.  What will you pay me for the rest of them?  He has all of them.”

“All of them?” I queried.  “What do you mean by all of them?  Binge & Purge is the one most people are thinking off.”

“Yeah he has that, and all the others too,” he continued, “all sealed.  Metallica have a lot of box sets.  He has doubles of all of them.”

The dude smelled fishy, and it sounded to me like he was setting up a story in order to possibly go across the street to the mall, steal one or more, and sell them to me.  At this point, my guard was up and I wasn’t interested.  So, as diplomatically as possible, I addressed the big guy.

“Well dude, I can’t make any promises.  I can’t give you any kind of quote or promise without knowing what I’m buying.”

Cutting me off again, he repeated, “They’re all brand new.  Still in plastic.  Yeah, my buddy, he collects them.  But, uhh, he owes me money, and uhh…he said I could sell what I needed to get the money.  Can you give me $400?”

If I was drinking something I probably would spat it up.  “Umm, no man, listen, I really can’t help you out with that right now.”

“Are you hiring?” he replied, changing tack.

I paused, trying to keep up with the guy’s racing thoughts.  Even if I was hiring, there was no way I was telling him that!  I replied in the negative.

“No?  Can you hire me just for this afternoon?  I could lift stuff and help around the store,” he persisted.

“I just need enough for the bus.  I have to be in Hamilton on Friday.  I’m going to Hamilton to work, but I don’t have a way of getting there yet.  Can you just, you know, give me some money?” I couldn’t believe I was hearing this.

“Sorry man, I really can’t.  Maybe someone else can help you if you go elsewhere,” I said, politely terminating the conversation.

“OK.  I’m going to go get those Metallica box sets.  My buddy lives really close.  I’ll be back in 20 minutes,” he announced, as he left the store.

I knew a guy at the HMV store at the mall, so I gave him a call.  I asked him to keep an eye on a big bald guy who might be eyeing the Metallica box set a little too closely.  He called the other music stores at the mall and gave them a heads-up as well.

Big guy was never seen nor heard from again!